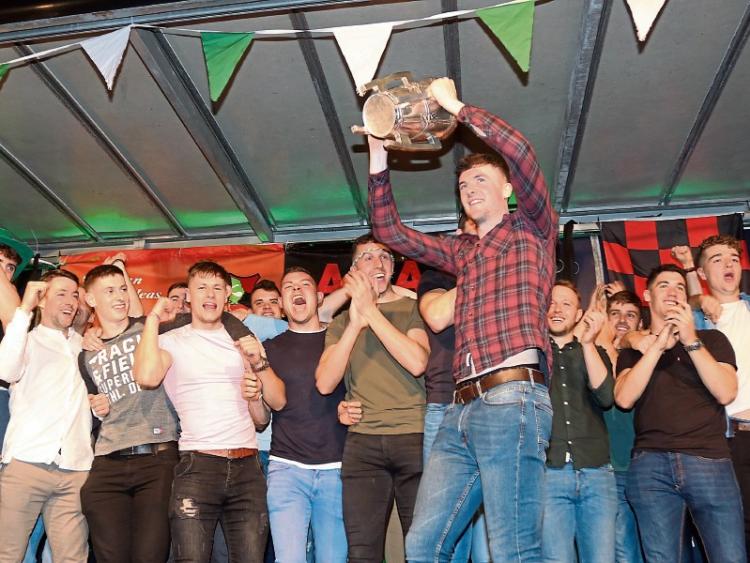 AFTER the jaw-dropping outpouring of emotion and joy that greeted Monday night’s homecoming for the Limerick hurlers at the Gaelic Grounds, the appetite for celebration showed no sign of abating in Adare on Tuesday night.

From early evening, thousands began pouring into Adare, spilling out of bars and cafes, lining the streets in anticipation and creating a carnival atmosphere in the playing field of Scoil Naomh Iosaf, the field of dreams where Limerick captain Declan Hannon’s dream of Croke Park first took hold.

The good-humoured crowd — young, very young and not so young — were eager and determined to welcome back their own to home ground, and they were prepared to wait.

As the lingering wait began, and then lingered a little more, Adare was buzzing, with brisk business being done in ice-cream, burgers and pints and even some (unofficial) flags going for half-price.

But as we waited some more, we began to envy the players their juicy steaks at the Woodlands House Hotel, or at least those who had come prepared with snacks and picnic chairs.

But then came the word we were aching for. They were on their way. The bus is on the way. 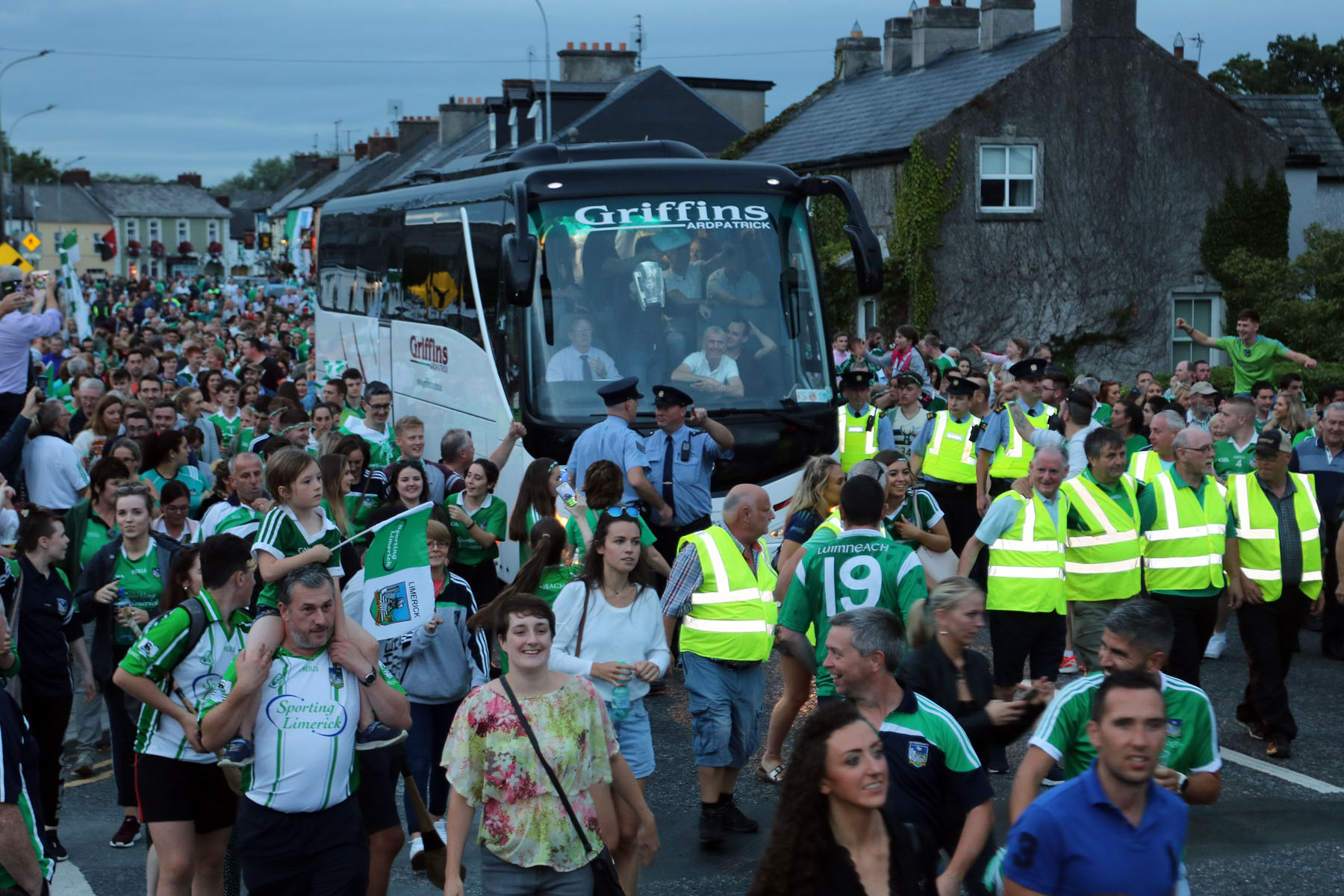 Slowly, carefully, the bus and its precious cargo inched its way through Adare, the Liam McCarthy cup in the front window a gleaming silver beacon. A thing of wonder and awe, before the bellyroar of cheers and screams rang out in the gloaming.

Still grinning, still lively, the management and panel members answered the roll-call to come on stage until only Declan Hannon and the McCarthy cup were left.

Forty-five years after Eamonn Grimes brought the cup to Adare, the village’s very own Declan Hannon stepped on to the stage, holding the Liam McCarthy cup aloft. And pride soared, up, up into the night sky as the crowd roared their approbation, their thanks and their heartfelt delight.

“It is quite emotional going through the village, seeing lads you know from school, lads who trained you from a young age,” Declan acknowledged. “Coming back here to my primary school is surreal.” 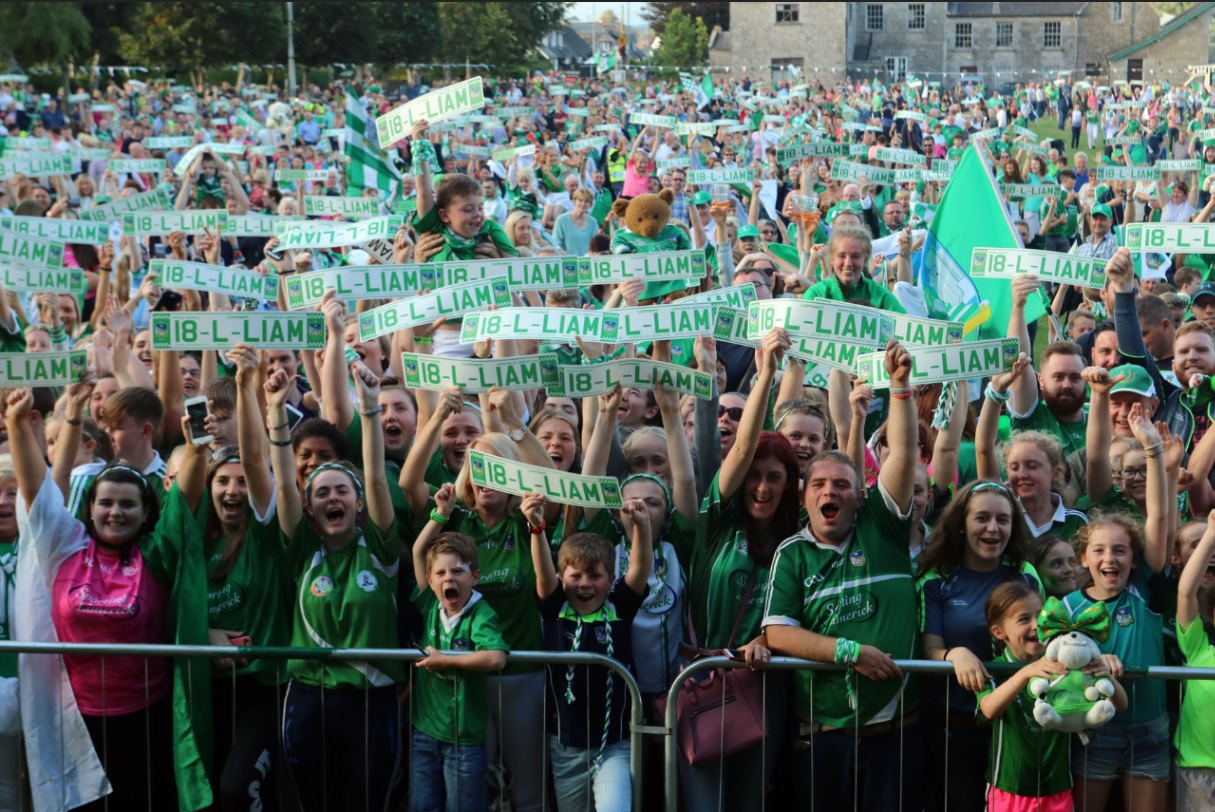 “It is an emotional time for me — and it is great for me and for my family and close friends to be here,” he said.

“We are very very proud of Declan and what he has achieved with Limerick,” said Padraig O’Brien, chairman of the Adare club.

“Since he started playing hurling under age, he has been a star. He has been a leader, captaining several underage teams to county finals and then progressing to the Harty Cup and now this.”

Declan, he continued, is a leader on the field.

“He lets the hurley do his talking.”

Kyle Hayes, the Kildimo-Pallaskenry player who won Man of the Match, was given a particularly warm welcome.

“We have a very good bunch of lads from the under-21s,” he said. “The main thing was to get out there and win the match.”

And his advice to the many young lads and girls who gazed up at him in wonder?

“Just keep practising,” he said. “And stay away from the liquor.”

”It has been fantastic,” team manager John Kiely told the crowd. “We had a wonderful day today.”

“It is really important that happens. We are such a privileged bunch of people to be involved in this journey. It is important we consider the people out there with their own challenges as well.”

I was thrilled for Declan, John continued.

“I was with him in 2013 and he really has come the full circle. It took five years but it was worth it," he added.