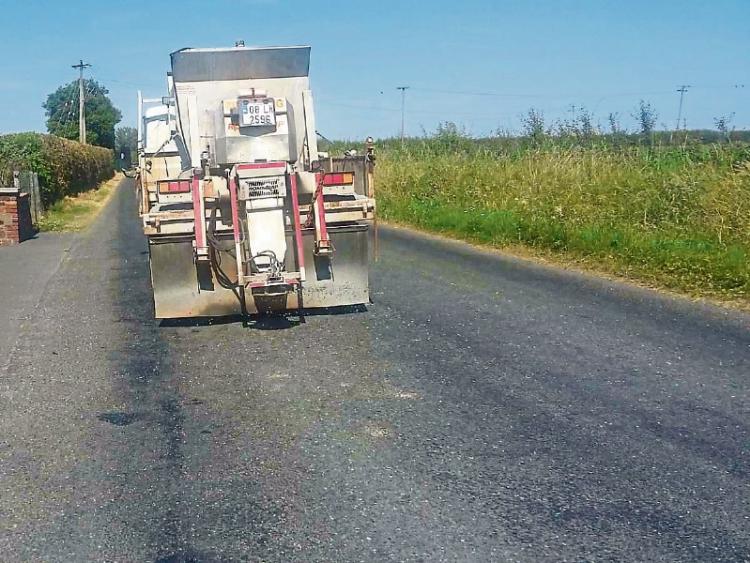 A gritting truck pictured near Newcastle West on Thursday afternoon

LIMERICK Council has deployed its outdoor crews to grit many of the county’s roads, which are experiencing bubbling due to the constant high temperatures.

At Thursday's Cappamore-Kilmallock municipal district meeting, John Sheehan, executive engineer, said: "This is all we are doing."

All road surfacing work has been stood down, said the engineer.

"I know it can't be helped. For instance, the Ballintubber road in Kilfinane is bubbling. It is like driving through water. It is destroying cars. The council has been putting out stones and they need to keep doing it. People pay their road tax so they can drive on roads without their cars being damaged," said Cllr Sheehy.

The Independent councillor said it is ironic considering the cold weather caused potholes only a few months ago, and now hot weather is causing its own problems.

A Limerick City and County Council spokesperson said officials are closely monitoring the situation and will continue to grit the roads for as long as is necessary.

"The abnormally high temperatures are causing many roads to show signs of distress with tar bubbling. This is particularly the case on smaller surface dressed roads on regional roads, local and secondary routes. All of our area crews are actively gritting the worst affected areas with 6mm chips. Particular attention is being given to junction locations and bends.

"Temperature gauges located on some of the main national routes in Limerick show that road temperatures are reaching in excess of 50 degrees celsius," said the spokesperson.

Limerick City and County Council is urging motorists to take care on the roads as the hot temperatures mean surfaces can become slick and dangerous, particularly on minor roads and to exercise caution when braking.