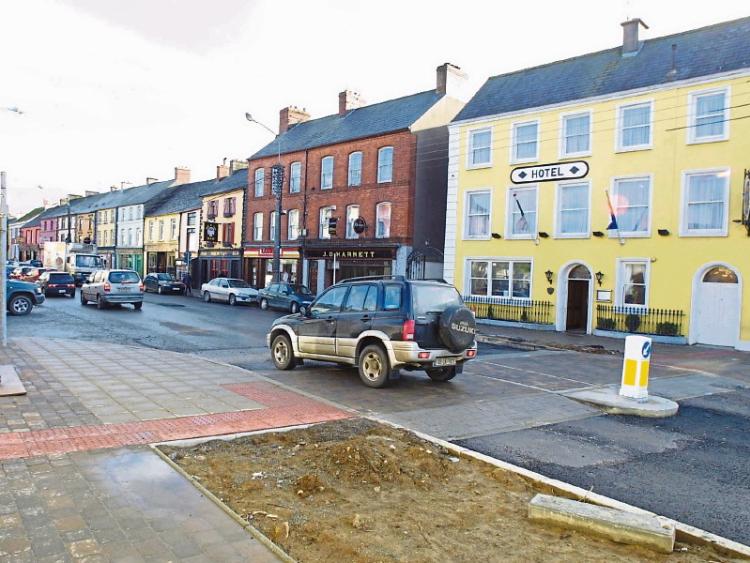 ABBEYFEALE has one of the worst pedestrian accident rates in the country, it was revealed at a meeting of local councillors when a multi-million euro traffic management plan for the town came up for discussion.

The €4.8m plan, (to be funded by Transport Infrastructure Ireland (formerly the NRA)  has, however,  caused consternation and dismay among business people in the town who claim it will remove over 30 parking spaces from the Main Street.

“People were not made aware that these spaces are being lost,” one business owner said, pointing out that plan provided only five parking spaces on the side of the street  between Tobins and Leens Hotel and 18 on the opposite side. “Businesses will not be able to survive. It is not a town plan. It is a traffic management plan to get lorries through the town. That is not our concern. Our concern is to protect our investment, not only for ourselves but for the community at large.”

“This could be the death knell of Abbeyfeale,” warned another. “Small towns are on their knees. It will decimate the town. It is all about convenience. If people have to park 200 to 300 yards away they won’t stop. They will keep going.”

“It seems this is a runway,” he continued. “We will have an aesthetically pleasing town with new paving and footpaths but there will be no reason to come to the town.”

“I can see myself closing,” another business owner added.

The business owners welcomed certain aspects of the €4.8m plan, in particular the proposal to buy  and knock Riordan’s pub on the Main Street which would provide 24 off-street parking spaces as well as opening up access to the public car park lying at the rear of the Main Street.

But they were adamant this did not compensate for the spaces being removed. They were also sceptical about the proposal to introduce lights at the Fire Station and Joys Corner junctions, given the experience in Newcastle West.

What they wanted was for the footpaths to be narrowed by 12 or 18 inches on each side, instead of widening them as is proposed in the plan. This, they argued, would allow a “runway” for traffic in both directions.

The plan was due to come before the six councillors in the Newcastle West Municipal District this Wednesday morning where it was expected they would vote on it and allow it through to the next stage of the planning process.

But this news  prompted the Abbeyfeale traders to call an eleventh hour meeting on Monday night where they laid out their objections to the councillors and demanded they go back to the drawing board.

When the matter came before the councillors this Wednesday, the chairman Cllr Michael Collins said they had discussed the matter earlier but there wasn’t agreement. “I think there is tweaking to be done,” he said. Apart from the car parking spaces, he wanted issues at Bridge St to be looked at and did not consider that traffic lights would deliver the traffic flow needed in the town.

Cllr Francis Foley believed it was a good plan but agreed some of the issues needed to be explored.”We need to make our town more shopping friendly,” he said.

“I honestly believe we are almost there,” Cllr John Sheahan said but he argued that the Transport Infrastructure Ireland (formerly the NRA) was funding the project “because their remit is to get traffic from A to B as fast and as safely as possible.”

Abbeyfeale has one of the highest incidents of accidents to pedestrians in the country, Cllr Seamus Browne said, pointing out that six had taken place within the past year.  But he was also concerned that businesses in Abbeyfeale had suffered over the last 10 to 15 years. Pointing out that unemployment in the town was running at 41%, he said they should do nothing that might increase that.

Cllr Jerome Scanlan said that the long-term future for Abbeyfeale and Newcastle West lay in being by-passed. But he added: “Don’t give us one without the other.” He felt this should be prioritised.

Cllr John Sheahan however didn’t want the message to go out that there are major problems in Abbeyfeale and Cllr Liam Galvin stressed that the town is “wide awake and open for business.” “We are not putting in €4.8m to close the place down,” he said. However, he pressed for commitments for a modelling of the traffic lights to be done in advance of any work to see if they will work or not, and if not, he said, he wanted the spaces removed to locate them would be restored.

Councillors agreed to defer the vote for a week to see if the plan could be tweaked to squeeze more parking spaces into the plan. Among the proposals to be looked at are: a reduction of the loading bay by two car spaces; a relocation of the loading bay to the car and a relocation of  new proposed coach stop. A road connecting Hill Road to the Killarney Rd is also to be examined further.

Councillors also agreed to meet representatives of the Abbeyfeale traders before the next meeting on May 9.