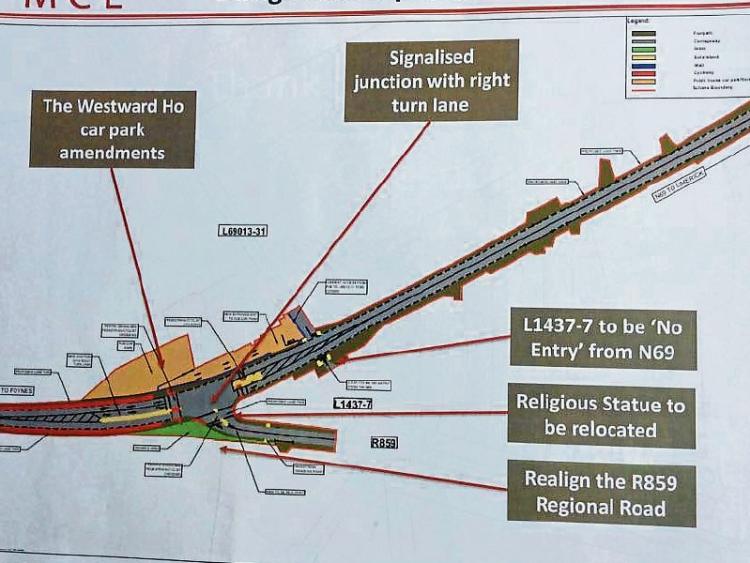 Plans for the new road have been finalised

A MAJOR new road plan presented this week could “reunite” the village of Mungret, councillors have said.

Representatives of the Mid-West National Road Design Office presented plans for safety improvements at the N69 Mungret and Boland’s Cross.

The junction on the outskirts of the village, where the R859 and the N69 meet is considered to be dangerous, with a number of accidents reported in the vicinity.

A preferred option has been selected, to include advanced stop-lines, fresh traffic signage, and a cycle-track on both sides of the N69.

The local road, L1437-7 from the N69 will be designated as a no-entry area, while a religious sculpture will be relocated as part of the scheme.

A signalised junction will be put in place at the junction with the R859 and the N69, in the hope it will lead to much calmer traffic.

Footway improvements would also be introduced to Moore’s Lane under the scheme.

Fine Gael councillor Daniel Butler said these reforms will help developments in the village, and hopes it might pave the way for some new shops and businesses.

Fianna Fail’s James Collins referenced this week’s grant of permission to Irish Cement at its plant in Mungret.

“This is the kind of thing that residents of Mungret deserve, as opposed to what is happening at Irish Cement. The N69 is a dangerous stretch because of traffic. But this is another piece of the jigsaw in laying together the social fabric of these communities.”

He said he would like more information on the relocation of the religious statue, acknowledging it could prove to be an “emotive” matter.

“This road is a nightmare. for speeding. Putting up a sign telling drivers to reduce their speed from 100kph to 50kph is not going to make a difference in my opinion,” he said.