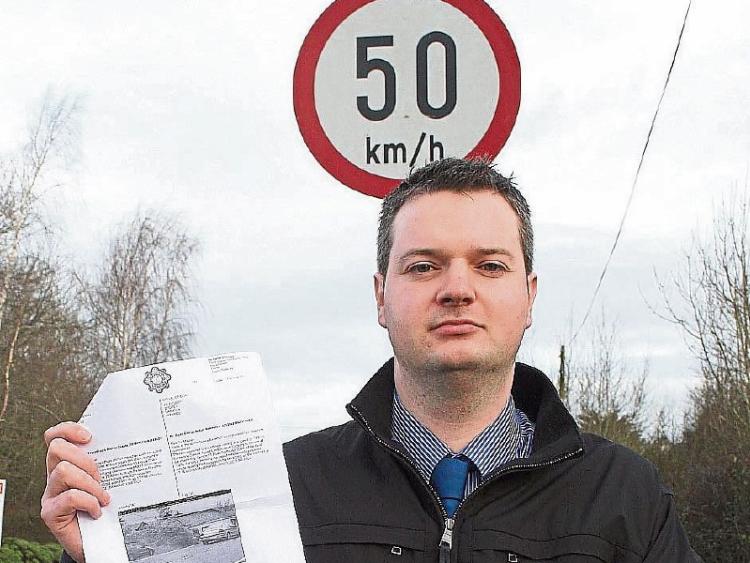 Caught! Donal O’Regan, reporter, pictured in 2012 at the stretch of road

LIMERICK'S councillors have accelerated a proposed change at one of the most notorious speed van traps in the county.

The long 50kms zone in Banogue on the main Limerick to Cork road has caught out thousands of motorists over the years, including this reporter in 2012 (see story below). The stretch has been classed as an “accident blackspot” due to a number of tragic fatalities.

It is proposed that the 50 km speed limit will be increased to 60 kms. The existing 50 km sign on the Cork side will be changed to an 80 km one and a new 60 km sign erected near the lay-by. Councillors in the Cappamore-Kilmallock municipal district backed the proposal and it is due to go to public consultation early this year.

They were given a presentation by Gerard O’Connor and John O’Keeffe, senior and executive engineers with the council.

“It was an onerous task and it was the first one one for the amalgamated authority. We had to physically look at all the bye-laws to make sure the wording was correct,” said Mr O’ Connor. As the national roads network is under the jurisdiction of Transport Infrastructure Ireland (TII) they met with TII officials.

“We had some movement,” said Mr O’Connor. Mr O’Keeffe then set out the changes agreed with TII.

After outlining the proposed changes in Banogue, he moved to the east of the county and the N24.

“Dromkeen is changing slightly. Coming from the Limerick side, where the existing 60km sign is, that is now changing to 80km. A new 60km sign will be erected around 200 metres before the junction. It is proposed that it will stay the same on the Tipperary side,” Mr O’Keeffe told councillors at the meeting.

He said that Pallasgreen will remain the same on the Limerick side but the length of the 50km will be extended a further 70 metres on the Tipperary side.

Up the road in Oola, it is proposed on the Limerick side that the existing 60 km sign will change to an 80 km one and then remain 50kms through the village.

The process now moves to public consultation where full details on the proposals will be advertised after councillors gave their approval. The public’s submissions and the engineers recommendations on them will be brought back to the Cappamore-Kilmallock municipal district. Pending their approval the bye-laws will be brought before the full council then.

”It is to give motorists the opportunity to speed up once they have exited. They [speed zones] lose their effectiveness if they go out too far. They want free flowing traffic,” said Mr O’Connor.

The Leader rang a number of people in the Banogue area on the proposed 50 km to 60 km change. The consensus was it didn’t matter if the speed limit is 50 kms, 60 kms or 100 kms if it isn’t being enforced.

“Cars are flying through Banogue. It is months since I’ve seen the speed van here,” one said.

Notekeeper turns poacher as Limerick reporter is up in court (story from February 25, 2012)

THE NOTEKEEPER turned poacher at Kilmallock Court last Friday when this reporter was up before the judge, while also being on duty for the Leader.

Garda John Marsh told the court I was doing 74kms in a 50km zone. It wasn’t a shock getting the fine, the bigger surprise was I was only caught doing 74kms per hour – there must have been a slower car in front of me.

Unlike many I did receive the letter. But not being the most organised, the letter was thrown in to a pile with bank correspondence and the like. When I finally got around to opening it, the 56 days had passed, so I found myself red faced in court.

“Guilty your honour,” I mumbled. I was bang to rights. Every court reporter gets asked regularly: “Any chance you could keep it off the paper”? Money is often offered, but everyone who asks gets the same response: the Leader has a strict policy of reporting all cases for which our journalists are present.

That very much includes our own reporters - as this article demonstrates. Nobody who has been prosecuted in a court case likes seeing their name in the paper, unless they have been vindicated.

But newspapers of record have a duty to cover the courts and our democracy would suffer if reporters were not there to keep the general public informed. Courts will always be a prime source of news and fact is often stranger than fiction, which brings me neatly on to events at Banogue on July 15 last.

On the main Limerick Cork Road for over half a kilometre motorists have to slow from 100kms to 50km (31miles). It feels like you would be faster getting out and walking. Yet on the narrow roads off Banogue Cross 80kms is the speed limit. I was caught by the gardai but it is mainly the red Go Safe van that is in situ on the Charleville side of Bangoue. If somebody got planning permission for a coffee machine there they would make a fortune.

I was in good company on Friday as there were eight others up for speeding at Ballynabanoge. God only knows how many were caught who opened their mail and paid their fines. It is like shooting fish in a barrel. Up the road there is a much busier and dangerous cross – O’Rourke’s. There it is 60kms for some reason and is a much shorter zone than Banogue.

Yet it links Kilmallock and Newcastle West and also has a busy petrol station. Minister for Transport Leo Varadkar has announced plans for a nationwide audit of speed limits to ensure that all speed restrictions are both safe and sensible. “We all know of cases where speed limits are inappropriately low or inappropriately high,” said Minister Varadkar.

“Recent road safety measures like speed cameras and new drink driving laws have gone a long way towards improving road safety. However, we need to ensure that the right speed limits are in operation on the right roads,” he added.

I can think of one that needs to be looked at. I may have poked fun at myself in this article, but there is a deadly serious issue here. Speed remains the biggest killer on our roads. There have been a number of fatal car accidents on the N20 and if I had been required to brake quickly it would have taken me over twice as long to stop at 74km than 50kms.

As the minister says, the right limits must apply on the right roads. In Limerick, Banogue is one of them, but only one. Are there inappropriate speed limits near where you live? Let us know and we will highlight them. email news@ limerickleader.ie or contact the newsdesk on 061-214503.