DEMONSTRATION: MARCH TO START IN CITY CENTRE AND FINISH IN DOORADOYLE 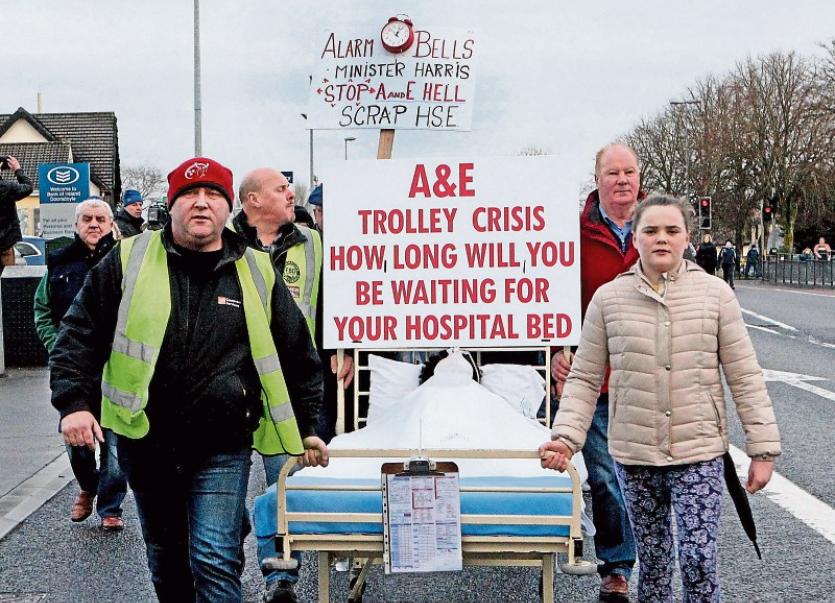 Up to 100 people protested against overcrowding at UHL last Saturday

ANOTHER people’s protest against overcrowding at University Hospital Limerick and the closure of emergency departments in the Mid-West is expected to take place in the city in the coming weeks.

The Right2Change organisation, an activist group established to fight Irish Water charges, has confirmed to the Limerick Leader that it will be organising a “major protest” in February or early March.

This follows a similar public demonstration last Saturday afternoon which drew more than 100 protesters to a march from UHL to Crescent Shopping Centre. The Right2Change demonstration will start in the city centre and will make its way to the Dooradoyle hospital.

Spokesperson for Right2Change Mid-West, Greg Doran, said he was calling on those who have been affected by the closure of the A&Es in Ennis and Nenagh hospitals to attend the march.

“It is more about the flow coming in from Clare and Tipperary that is causing the problem, and the fact that the ground-level staff are getting slaughtered.

“For this protest, we are going to work with the unions and groups, and we are going to get the nurses speaking, union reps and people who have been really affected by this. And we want this to be as non-political as we can have it,” Mr Doran explained.

He added that more information will be available on the group's Facebook page in the coming weeks.

Meanwhile, there were 34 people on trolleys at UHL this Friday, according to figures compiled by the Irish Nurses and Midwives Organisation, a slight increase on the day before at 30 but only half of the peak levels seen the previous week in the hospital.