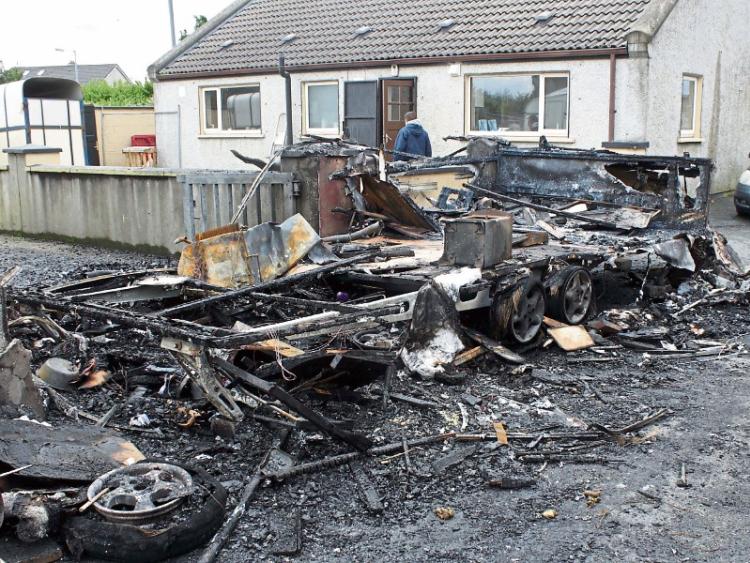 The scene of the fire in Rhebogue [Picture: Michael Cowhey]

TRAVELLER families in a city halting site have praised the Limerick Fire Service for their “heroic” act as they quenched a large caravan blaze that “could have set the whole place on fire”.

In the early hours of Monday morning, the dining room of a caravan, which was parked on the footpath between two houses at the entrance of Rhebogue halting site, caught fire and gutted the vehicle in less than 10 minutes, according to residents.

At 3.11am, emergency services were notified of the incident and three city fire service appliances were dispatched to the scene. Members of Limerick Fire Service quickly combatted the flames and remained at the scene until 4.23am.

Gardaí investigations are ongoing, but the fire is not believed to be suspicious at this time, according to a garda spokesperson.

There were no reported injuries during the incident.

Site residents, who do not wish to be named, said that a woman discovered smoke rising from the rear of the caravan as she woke up to get a glass of water, and called the emergency services straight away.

A nearby caravan was also badly damaged by the flames. Behind the destroyed caravan was a brick shed with a number of young puppies.

It was undamaged and no animals suffered any injuries during the halting site fire.

“We have children, so we had to get them out of the bed straight away,” one woman said on Monday morning.

“It was a very frightening experience to see it. Because, at the back of the estate, there are a load of kids.

There are fears that a future incident like this could lead to a situation similar to last year’s tragedy in Carrickmines, in which 10 people were killed as a result of a caravan kitchen fire.

“For a long time, people couldn’t get out. There was panic because they were trapped. There were children screaming crying.

“Ever since Carrickmines, we have thought about it. But the fire brigade were lucky to arrive on time. When they came, it was completely up in flames. It burnt to the ground.

“But they were exceptional. They were very fast. But there are massive question marks over what happened here last night,” a mother said.

One resident added: “If it wasn’t for them [Limerick Fire Service], another caravan would have gone up in flames, also.

“Thank God the fire brigade got here on time. Because there was one very young kid in that house over there, and if one goes up, they all go up.”

Anyone with information in relation to the incident is advised to contact Henry Street garda station at 061-212400 or the Garda Confidential Line at 1800 666 111.