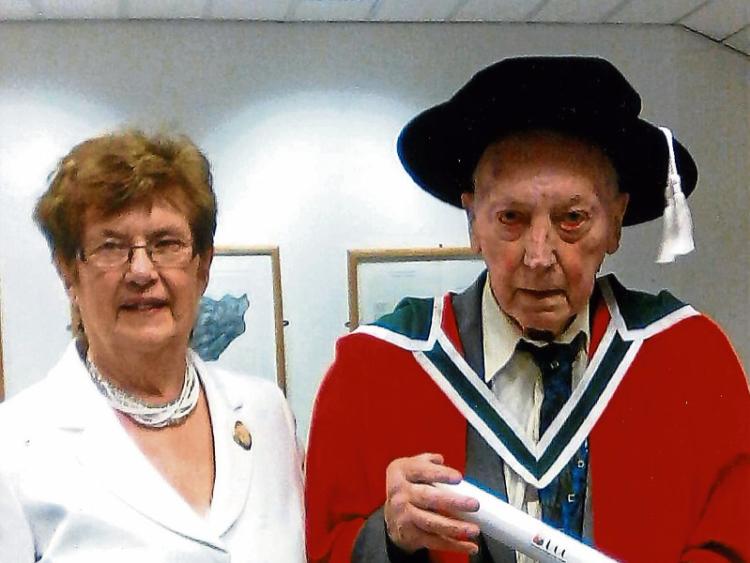 TWELVE months ago Pat Aylward gave us all a lesson that age doesn’t matter and if you put your mind to it you can accomplish anything.

He went to his God last month but his legacy of lifelong learning lives on. In 2016, Pat, then 83, became one of, if not the oldest, people in the country to complete a PhD.

But not only that - he finished his thesis despite falling from a ladder, being rushed to hospital with an abdominal aneurysm and undergoing an operation to remove a growth from a kidney.

Written in Spanish, Echoes of existentialism in the works of Carlos Fuentes - a Mexican novelist and essayist – runs to over 70,000 words. In a moving homily at his funeral Mass, Fr Frank O’Connor summed it up perfectly.

“Pat the teacher became Pat the student, when many of us would be putting our feet up, Pat developed as an artist, and at the age of 83 achieved the noble distinction of receiving a Doctorate,” said Fr O’Connor.

Despite his failing health, Pat, incredibly, had started writing a new book on Mexican early civilisation. He had 35 pages written when he passed away on July 16 in the loving care of the staff of St John's Hospital. Phil, his loving wife, wished to thank all the doctors and nurses in UHL and St John’s for their wonderful care.

Born in Dromcollogher, Pat completed his H Dip and Masters in Education in UCC. He taught Spanish in Coláiste an Spioraid Naoimh in Bishopstown, Cork, and also coached Jimmy Barry Murphy.

Pat swapped the south of Ireland for the West Indies for 10 years before returning to his home county and starting in St Munchin’s College in 1973. Corbally became home.

It was to be his last job as he taught legions of boys French and other subjects until his retirement in 1998.

Once his teaching career ended he had more time for painting, crafting bog oak ornaments, his 40 year association with St Vincent de Paul, community work, and politics, as a long standing active member of Fine Gael.

Former councillor, Denis McCarthy contacted the Leader to say Pat was “one of life’s finest gentlemen”. One of many stories he tells is that there is a roundabout in Corbally now known as the Pat Aylward roundabout because Pat instigated its transformation from overgrown to pristine.

“He was a mentor to me. He was very active in trying to improve people’s lives. I learnt so much from him it is phenomenal,” said Cllr Daly.

“Most people at UCC simply couldn’t believe that someone of his years might attempt what is so clearly a long-term project and huge time commitment. And most people would certainly have given up doctoral studies when receiving treatment for an abdominal aneurysm which happened during his second year. However, he had tremendous stamina and was utterly determined to see it through to the end.

“His sense of humour was the other characteristic that I remember so fondly. In the middle of very structured conversations about the next steps, what needed to be done and all that, he would throw in a caustic aside, a funny one-liner, something that would always make us laugh and motivate us towards the next milestone,” said Prof Finnegan, who was “flabbergasted” when he finished the PhD that he continued to research and was eagerly reading material about Aztec history.

“He told me he wanted to write something soon – I told him I would be happy to read it. Most of all, Pat was a motivating figure and I think he must have been a wonderful teacher. Saying my goodbyes to Phil at the graveyard in Dromcollogher, she said to me, ‘You know what Pat would say to you if he were here? Have you finished that book yet’, making reference to my own current project which has faced its own obstacles along the way.

“And that, I think, is how I might remember him best, inspiring others to pursue their own goals and dreams. I’m hoping to channel that inspiration and complete my project. I’m just sorry he won’t be at the launch. We will cherish our memories of him and he will live on in our hearts forever,” said Prof Finnegan.

The month’s mind Mass of Pat Aylward takes place this Saturday, August 19 at 10am in St Mary’s, Athlunkard Street. May he rest in peace.