Then & Now: A real treat to the clash of the ash in Limerick 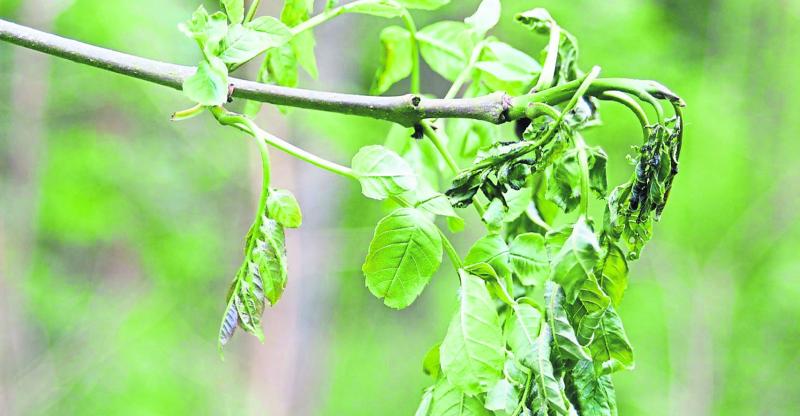 Grant me O Lord, a hurler's skill,
With strength of arm and speed of limb
Unerring eye for the flying ball
And courage to match them whatever befall.

WILL THE clash of the ash become a thing of the past in future years because of the spread of the ash dieback (Chalara Fraxinea) disease, which has spread to every county in the country? The first case was confirmed in Ireland on October 12, 2012, in a young forestry plantation that had been planted with imported trees.
In 2010 it was predicted that by 2022 Ireland would be self -sufficient in the supply of ash for hurley makers. Now twelve years later the future for Ireland's ash trees is grim due to the disease, restrictions on planting ash trees and difficulty in getting felling licences to cut existing ash trees, before they are infected.
Some say that the name ash evolved from the Anglo-Saxon word for a spear , aesc, ash wood being used for spear shafts because of its strength. Other authors claim that the name derives from the Icelandic word 'aske', which means great fire blaze because ash makes an excellent firewood. The generic name Fraxinus, derives from the Latin word frango (I break) which reflects the ease with which ash wood splits. The specific name 'excelsior' means tall or lofty, reflecting the fact that mature ash trees are some of our tallest deciduous trees.
Reference books tell us that woodsmen of old called the ash tree 'Venus of the Woods', after the Roman goddess of beauty. There would have been many ancient ash trees in Ireland's wildwood scattered mainly on drier ground amongst commoner species like oak, elm and hazel. Compared with some other species ash trees are not long lived. They start dying back after growing for about 200 years, so there aren't many really old ash trees left now. Ash has served mankind well and it has been used over the years for making ploughshares, tool handles, tennis racquets, hurleys , and many other products.
The Chalara disease, which affects trees of all ages, is caused by a microscopic fungus that lives on leaves and twigs and produces a chemical called viridiol which is toxic to ash. The infected leaflets first develop black spots, then the whole leaf goes dark brown and eventually wilts and hangs down on the tree. The nasty disease then spreads into twigs where it creates a sunken bluish-black area which may spread into bigger branches where a long thin strip of bark goes black, eventually developing into an elongated canker. The infected trees are not regularly killed, but the disease causes leaf loss and crown dieback which damages the timber producing potential of commercially grown ash plantations.
The Irish hurley manufacturers have been importing ash for years from abroad to meet their orders, but the supply is drying up due to the disease around Europe and the war in Ukraine. This has increased pressure on the handful of wood suppliers in Ireland who look after the needs of the 60 to 70 full and part time hurley makers. The ash shortage has already seen Canning Hurleys in Galway go out of business and others are in danger. This has led to the arrival of bamboo and synthetic hurleys being used.
The GAA, Coillte, Teagasc, Department of Agriculture and other interested parties have been coming together to address the problems, find solutions and plan for the future. Their long term focus is to breed ash trees that are resistant to disease, to develop reinforced and hybrid hurleys, also hurleys made from other materials. We are after a wonderful summer of hurling which hopefully will survive this latest threat to the clash of the ash into the future. I conclude with the rest of Seamus Redmond’s The Hurlers Prayer, which may be needed to be recited now more than ever before.
May my stroke be steady and my aim be true
My actions manly and my misses few
And no matter what way the game may go
May I rest in friendship with every foe
When the final whistle for me has blown, I stand at last before God's Judgment throne
May the great referee when he calls my name
Say, you hurled like a man, you played the game.

The thistle
THE SPEAR thistle (also known as the common thistle or bull thistle) is a hardy biennial plant with a long tap root. It is found all over Ireland, is classed as a noxious weed and is regularly subjected to all kinds of control measures, aimed at restricting its distribution. However, despite our best efforts to eradicate it this thistle remains one of our most common and widespread wild plants. Spear thistles thrive in a wide variety of habitats, including rough grassland, heavily grazed pastures, dunes and sea cliffs. They also readily occupy any area of fertile ground that is subject to disturbance-such as waste land, arable fields, spoil heaps and burned woodland.
Young thistles start to emerge as seedlings any time from autumn through to spring, with most of the germination taking place in March and April. Seedlings quickly develop into small rosettes of characteristically prickly lobed leaves. Spear thistles do not produce flowering stems until at least their second year of growth, and sometimes take up to four years to flower. The stout flowering stems rise from the centre of the leafy rosette. They are deeply furrowed and covered in a bristly down. Spiny leaf bases are partially wrapped around the stem to form a prickly wing and the leaves themselves are deeply lobed with each lobe terminating in a prickly spine.
Spear thistles flower from July to September producing a cluster of large purple flower heads from 3 to 5cm(1 to 2 inches) long and from 2 to 5cm ( 0,75 to 2 inches) across. These flowers are particularly attractive to insects and are pollinated by a variety of bees, hover flies, butterflies and moths. Once the fluffy seed heads have been produced and the seeds are dispersed by the wind the flowering stems die back.

Despite being labelled as a noxious weed by man, the spear thistle plays an important role in nature. It provides food and shelter to a wide range of insects and other invertebrates, and thistle seeds are a vital source of food for some of our small resident birds in the run up to winter. In fact, the systematic destruction of thistles and other important seed-bearing weeds from farmland, verges and ditches is having a detrimental effect on some of our bird populations.
Thistles can be useful plants too and despite their fearsome appearance they are in fact edible. Young thistle leaves can be soaked in salted water overnight, then cooked and eaten. The root is said to taste somewhat like Jerusalem artichoke when cooked.
Young flower stems can be boiled and eaten as a vegetable, as can the flower buds, while the flowers themselves can be dried and used as a curdling agent. Thistles were our enemy during the hay making days of yore, but they have their part to play in our changing climate into the future.