THE PEOPLE behind a large-scale campaign in Limerick to help people from war-torn Ukraine have been named the Limerick Persons of the Month.

The Help for Ukraine campaign resulted in 44 tonnes of goods - mostly medical equipment - being donated in Limerick to be transported to Ukraine as the country endured heavy bombardment from Russian forces.

Due to the outpouring of goodwill locally for the collection, a host of other initiatives to assist the people of Ukraine followed.

“It started with myself, my sister Kamila and our friend Magda, when we were sitting down on the second day of the war watching it. We knew our strengths and we said we are going to have to do something,” explained Anna Mazeika who was joined at the award presentation by Olena Harkavenko and her granddaughter Sofija Petrhena who are from Odessa in Ukraine. 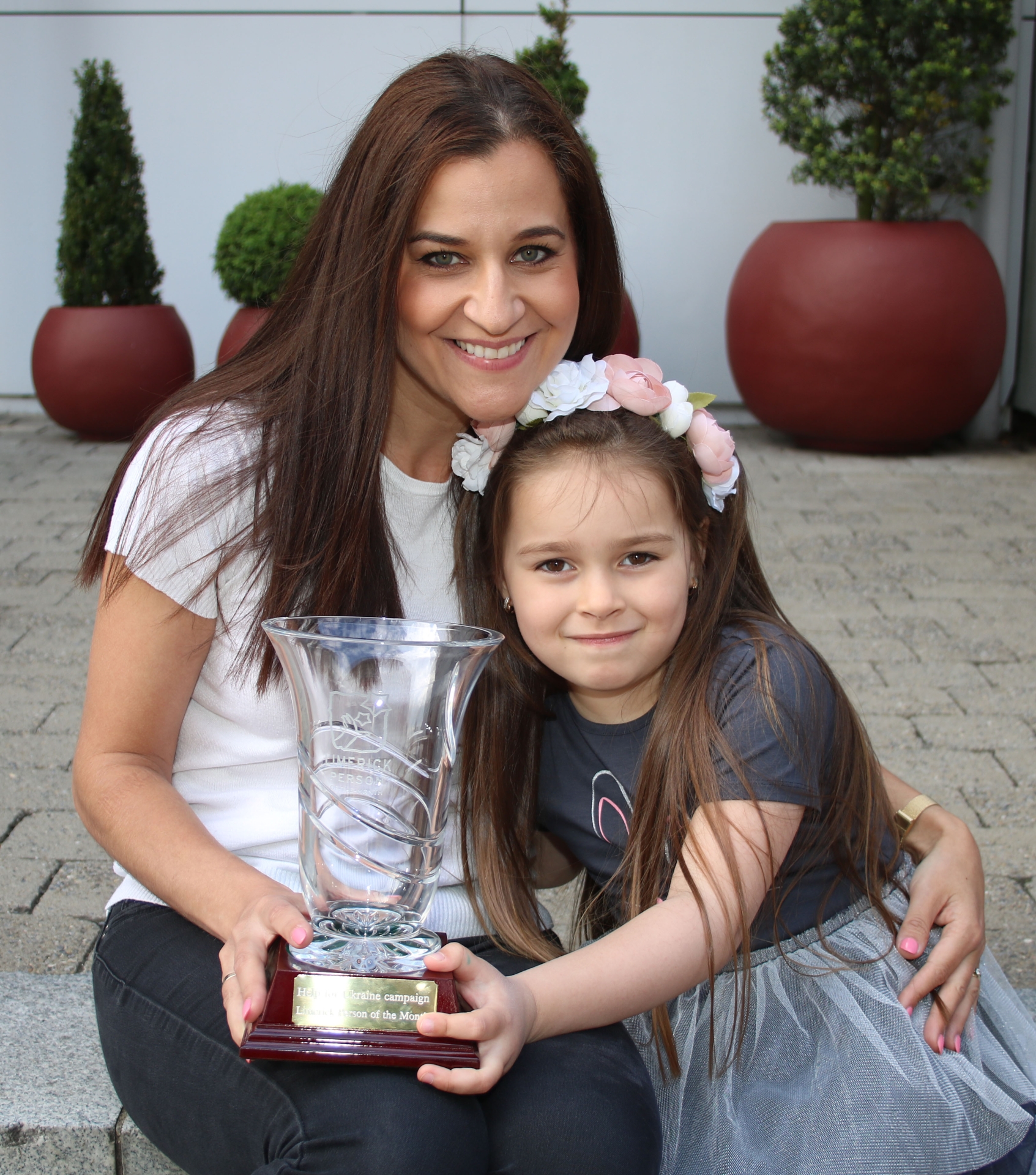 “We decided to do a shoebox collection. It was just meant to be a two-week campaign. Another friend of ours Kala Glowa has a nail salon in the city centre so we asked her for permission to use her place and she kindly allowed us to use one of her spare rooms at the back for the collection,” Anna continued.

But what started out as a small collection in a friend’s nail salon quickly grew into something much bigger which grabbed the attention of the Mayor of Limerick, Cllr Daniel Butler, and the University of Limerick.

The mayor informed Anna that the group could use the former Cleeves factory site in the city as the venue for the collection which ran over 10 days.

“Obviously Limerick Twenty Thirty who own the premises supported it. The University of Limerick also promoted the campaign encouraging students to help.”

This wasn’t the first time that Anna, who is originally from Poland, has helped the people of Ukraine.

“Back in 2014 when Ukraine was attacked the first time, I got to know a soldier, Jarek Podworski, and he has been helping Ukraine ever since. He lives in Poland and travels to Ukraine every so often. I asked him what he needed and he provided me with a list of most needed items. He did say we should focus on the medical equipment and supplies if possible,” she explained.

Anna, who works as a HR officer with Serosep, a diagnostic solutions company in Limerick, was very heartened when the CEO, Dermot Scanlon, got behind the initiative in a huge way – with the company financially supporting the endeavour and covering the cost of transport over two trips.

A total of 44 tonnes of what was mostly medical supplies was collected and sent out.

“It was moving to see so many people wanting to help. We had over 100 volunteers in Cleeves. A group of them were very strong and said ‘what’s next?’” she said.

“My sister decided to open a zero cost shop which was like a charity shop but they didn’t have to pay for the goods. A group of volunteers organised the donations on a daily basis.”

Through the shop, the group also supported homeless people in Limerick who turned to them for help, as well as refugees from Africa.

“They still need basic items like toiletries and washing powder. You can see the Facebook group, Ukrainians in Limerick, for details,” said Anna’s sister Kamila.

Anna also organised a jobs fair for the Ukrainians. “I got in touch with Unijobs. I had studied with Damien Bowe (Chief Operations Officer) and he gave advice on how to prepare themselves for the jobs market in Ireland. We did have a couple of job offers,” said Anna who also organised an event called the Migrant Expo which provided information to in the region of 1,000 people on finding employment, education, training in Ireland and childcare activities.

“We just hope that all the Ukrainian people will finally find comfort and safety here and they will be able to return at some stage to their loved ones.”

The Limerick Person of the Month Awards are supported by the Limerick Leader, The Clayton Hotel and media agency Southern.