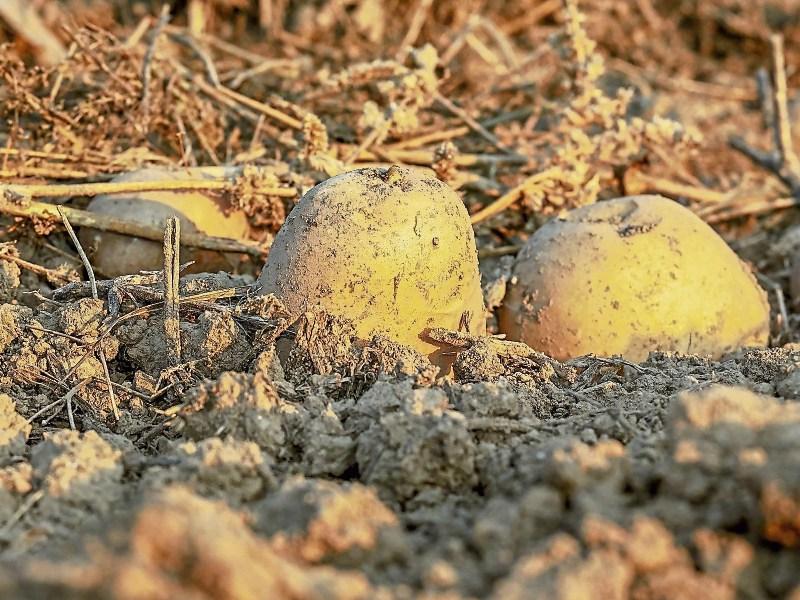 Stuck for space? Potatoes do well in containers with just a few simple steps

MY grandad on my mother’s side was a keen gardener and with a large family to feed his plot was always productive. As St Patrick’s Day approached he would have his potatoes in the ground and this was one of the many important planting milestones that he observed each spring.

I have always tried to follow his advice, in relation to potatoes anyway. The few weeks before St Patrick’s Day was spent patiently waiting for the rain to clear. I think he would have been more venerated in gardener’s eyes if he had driven out the rain rather than the snakes.

Even in a small space you can grow potatoes and I have switched to this method over the last few years. We have sown potatoes in old buckets from the local takeaway and these are very popular with gardeners. Also this year I found two old bins and a mop bucket that had been dumped in the woods. These were cleaned and up-cycled for planting potatoes.

The potatoes were well sprouted or to use the proper gardening term chitted. This means leaving the potatoes in a bright place that is cool and dry. Avoid direct sunlight as this cause the potatoes to turn green. This means they are inedible but perfect as seed potatoes. I put mine into old egg cartoons with the eyes up. When the sprouts are around a few centimetres long I move them to a brighter place or else they become very leggy.

The manure I used was two years old. It was dark and crumbly and had no smell. Every forkful was packed with worms.

These amazing creatures are the unseen workhorses of the soil. Their daily lives sees them digging tunnels help drain he soil, allow air to circulate and they mix organic matter like manure throughout the garden. In a good soil they can be millions and they also feed the blackbirds and starlings in my garden. The starling pair who are building their nest in a vent next door regularly come down to the lawn to feast on worms.

Worms are under pressure and one of the biggest threats is the New Zealand Flatworm. This predator arrived in Northern Ireland in the 60s and is slowly munching its way through Ireland’s earthworm population.

A friend of mine who runs a community organic garden has found New Zealand Flatworms a few hundred meters from the garden and it is only a matter of time before they reach his rich feeding grounds.

I filled up the bin a third of the way with manure and carefully placed the potatoes with the eyes up. The roots will also grow from the same place as the eyes. I find that six potatoes is plenty and i don’t give them as much space as out in the open ground.

When the first leaves start to emerge I will cover with compost. This protects the leaves for frost and I remember losing a lot of potatoes last year to early April frost. Since then I take no chances and watch the weather forecast. Covering or earthing up also prevents the potatoes from turning green and making them inedible.

I left the buckets up on an old table that has a few gaps on the top. This allows water to drain away and means and helps prevent fungal diseases like blight that potatoes are prone too.

My last sowing technique was to place manure on the cardboard and cover with cardboard. I made small holes and sowed in the potatoes. Next I covered with a layer of grass clippings and left nature and the worms to do the rest. This no dig approach is great for converting a piece of unproductive lawn into a fertile vegetable bed.

I only ever plant early potatoes as the main crop always got badly hit by blight. My shaded and damp garden create the perfect conditions for this fungus. It is very hard to change the nature of your garden although I have removed a few conifer trees and use raised beds and this has helped.

The rest of the onion sets need planting but that is a job for another day.