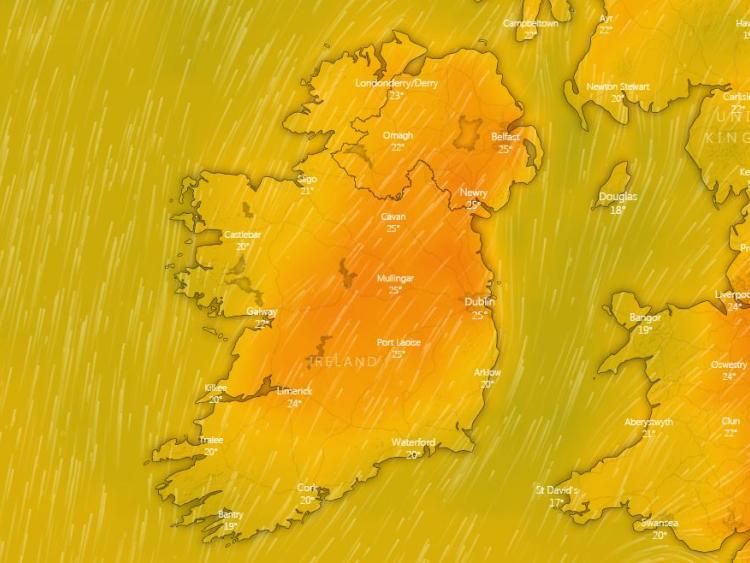 Temperatures are expected to hit the mid- to high-20s this Monday | Picture: Windy.com

FOLLOWING a weekend of high humidity and torrential rainfall, temperatures are expected to reach the mid- to high-20s as a second heatwave in a matter of weeks is expected to hit Europe in the coming days.

This Monday night will be dry and humid in most parts of the country, ranging between 14 and 17 degrees. In Limerick, it will be mainly cloudy with maximum temperatures of 19 degrees.

Tuesday will be mainly dry, partially cloudy with temperatures reaching 25 to 26 degrees along the western counties and Dublin, with a spot of rain in South Cork and Waterford.

In Limerick, there will be clear sunshine for a short period, with highest temperatures of 24 degrees at around 4pm.

Wednesday is expected to remain humid, with spells of heavy rain in the west and southern part of the country, with maximum temperatures of 20 degrees.

Likewise, while it will be mainly cloudy and dry for most of the day, Limerick will see spells of rain from 6pm onwards.

The forecast looks bleak for Thursday as it appears there will be heavy downpours for the entire day across country.

It appears that there will be rain in Limerick from 10pm on Wednesday until around 5pm on Thursday, according to Met Eireann.

Friday will be mainly cloudy with a spell of rain early in the morning.