Then&Now: Our patron saints has numerous connections to Limerick 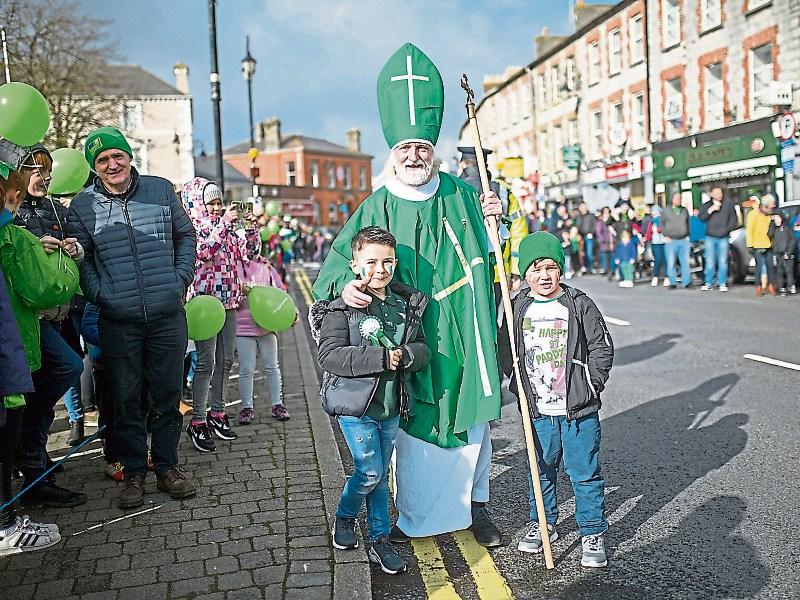 St Patrick himself pictured with Charles McDonagh and Aaron O'Connor at the St Patrick's Day Parade in Newcastle West last year. Sadly all parades have been cancelled this year due to the virus

SAINT PATRICK'S day is just around the corner and sadly this week it was announced that all parades have been cancelled because of the coronovirus.

There are many places in County Limerick associated with Saint Patrick be they fact or fiction. I recall Ardpatrick, Knockpatrick, Ardagh, Patrickswell, Castletown, and Athlacca, to name just a few. There are numerous Blessed Wells dedicated to our patron saint as well as Saint Patrick’s GAA Club in the City. Tradition has it that he visited many places around the City and County, and he blessed Kerry from the summit of Knockpatrick saying "I bless to the west of me."

All over the world, St Patrick's Day is normally celebrated with elaborate parades; families tuck into the traditional dinner of corned beef and cabbage everywhere except Ireland. In the pubs, the green beer flows swifter than the River Shannon. It's odd to think that just a short time ago, none of the most popular customs we often take for granted even existed. Today's international festivities are very different from how St. Patrick's Day was once celebrated in old Ireland

There are two main old customs associated with the festival of our patron saint namely the wearing of an emblem or symbol, and the drowning of the shamrock. While St Patrick's Day is now a national holiday, as well as a religious feast day, a few hundred years ago, the emphasis was on spirituality and a much-needed break from the austerities of Lent. Families would attend Mass, and every youngster proudly wore a St. Patrick's Cross. The week before the festival, children busied themselves in the making of the crosses, which differed, depending on whether you were a boy or a girl.

The boy's cross consisted of a three-inch square of white paper on which was drawn a circle divided by elliptical lines. Each compartment was shaded in with a different colour. For yellow, an egg yolk was often used; green could be had by chewing young grass; laundry blue provided another shade; and red, well, it was a cross for a little boy and one can only imagine how proud he must have been to sacrifice a few drops of blood in honour of St. Patrick! Come the big day, the finished cross was cheerfully worn, military style, on his cap.

While the cross for a boy was quite simple, the one for his sister was a bit fancier. It was formed by placing two three-inch pieces of cardboard or stiff paper at right angles to each other. To hold them in position, they were wrapped with ribbons of different colours and then a green rosette was placed in the centre. The proper way for a girl to wear her cross was either pinned at the right shoulder or on her chest. And, speaking of proper, it would have been considered a major blunder for a girl to wear a boy's cross or vice versa.

Besides the crosses for children, there was another type which was made only by the men folk. This was formed out of twigs from wild sallow and, as with the St Brigid's Cross, it was pinned to the thatch on the inside of the house. Each year a new one would be added. With all their crosses prepared, children went to bed on the eve of March 17 happy and contented as did the adults. Tomorrow, all Lenten restrictions would be set aside for a day of feasting and merriment.

When Mass was over, the mother and children would hurry back to the house to begin preparing the feast. Just as quickly, the men headed for the pub to drink the 'Pota Pádraig' or St. Patrick's Pot. This term is rarely heard today, but it continued in fairly general use in certain areas and was also applied to any treat given to friends, or gifts of money or sweets given to children. After one (or more) St. Patrick's Pots, the men folk hurried home to the feast of a nice piece of cured pork. The corned beef and cabbage was a custom that was begun by emigrants who, in longing for their native land, tried to create a meal that would remind them of home.

When dinner was over, many families either went to a Céilí or held one in their homes. The musical instruments stored away on Shrove Tuesday were brought out and the evening was spent in singing, dancing, telling stories and more drink. After all, there were still several weeks of fasting and abstinence ahead, so it was nice to over-indulge. No doubt, the children were ill from eating too many sweets, and their parents probably suffered from sore heads the next day. In the eyes of the church, this would have been a most appropriate penance!

The drowning of the shamrock following the parades on Saint Patrick’ Day has been in the news in recent years. In times past it had a different meaning and it was not necessary to get drunk to do so. The Shamrock was taken from their coat and put in a glass of their favourite drink and used to toast a person’s health. It was then picked out from the bottom of the glass and thrown over the left shoulder for good luck. Also, in some parts of Southern Ireland, a cross was marked with the end of a burnt stick on the sleeve of each person at the gathering. This was done with a prayer that the individual so marked might be constant in their faith and in their love of Ireland's patron saint.

There are numerous songs poems and hymns associated with Saint Patrick and the shamrock. One of the most popular The Dear Little Shamrock of Ireland was written by a Limerick man Andrew Cherry. I read about this many years ago in Irelands Own Magazine. They would publish a special edition to mark Saint Patrick’s Day. It would have a green colour cover and would contain all the facts and traditions about Saint Patrick and a pull-out section containing songs poems and hymns. It was very popular with readers who would often learn the words of the songs from it.

Andrew Cherry was born on January 11, 1762 in Creagh Lane/Bridge Street Limerick. He moved to Dublin at a young age and was apprenticed to a printer. His love for the theatre grew and he gave up his job and devoted his life to acting and writing. He travelled through Ireland for several years with other actors and he became known as Little Cherry. He was a comedian and wit and is remembered also for a letter he wrote to his former manager. ‘’Sir, I am not so great a fool you take me for! I have been bitten once by you, and I will never give you an opportunity of making two bites of A. Cherry."

His reputation as a poet and playwright grew and many successes followed on stage at home and in England and Wales. He died at Monmouth, Wales on February 7, 1812 at the young age of 50 years. His best-known song was The Dear Little Shamrock of Ireland sung so well by the great Irish tenor John Mc Cormack.

There’s a dear little plant that grows in our isle,

‘’Twas Saint Patrick himself, sure, that set it;

And the sun on his labour with pleasure did smile,

And with dew from his eye often wet it.

And he called it the dear little Shamrock of Ireland,