In part-two of his series looking at Bunratty, Tom Aherne focuses on the folk park and how it has become a world-famous attraction 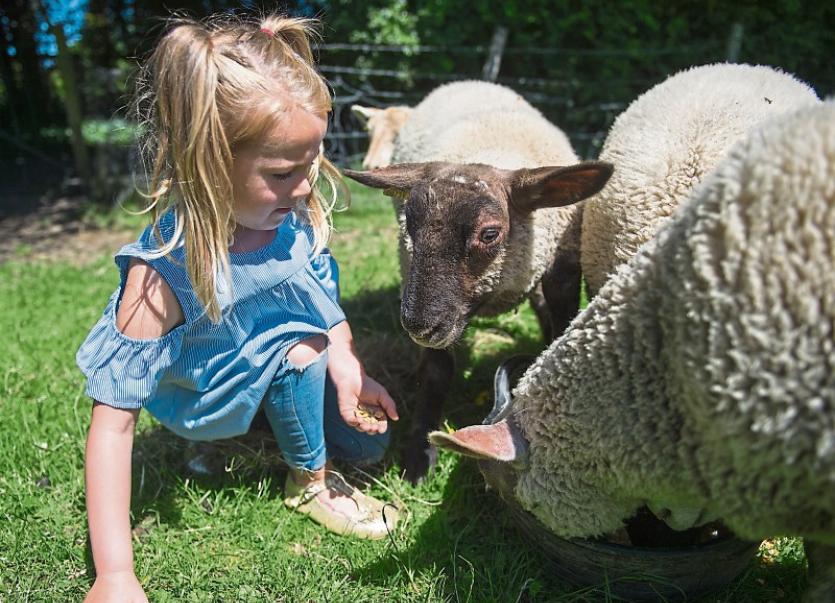 BUNRATTY FOLK Park is laid out over 26 acres, and features over 30 buildings in a ‘living’ village and rural setting.

The rural farmhouses, village shops and streets are recreated and furnished as they would have appeared at that time according to their social standing. They range from the poorest one roomed dwelling to Bunratty House a fine example of a Georgian residence built in 1804. It was the home of the Studdarts, the last family to occupy Bunratty Castle.

The village is set at a time of deep change in Irish society, and as such illustrates the growing money- leaning lifestyle of many of the villagers alongside the traditional, self-sufficient rural culture. The village houses and shops in the Folk Park have been chosen from many different areas, to form a collection of typical 19th century urban Irish buildings including the School, Doctor’s house, Pawnbrokers, Pub, Drapery, Print Works, Grocery, Hardware shop, Pottery and a Post Office.

In the early 19th century the country people provided for most of their own needs in food, clothing and supplies and bought only luxuries such as sugar, salt and tea. Fairs and markets at the Village gave the farmers and the rural craftsmen an opportunity of selling their products for cash, while shops provided for the rural dwellers needs. However, during this time, exciting new products were becoming available in the local shops, which started to rival, and eventually replace, home manufacture. It opened in 1964 and a report from that time makes interesting reading.

When the runway at Shannon Airport was being extended an old white-washed farmhouse stood in the way and had to be removed. Someone at Shannon suggested it should be preserved and re-erected elsewhere, and it was. It was placed in the triangle of land between the renovated Bunratty Castle and the Shannon Shamrock Inn. Since then it has been an object of interest to tourists, and in its kitchen bread and home-made cakes have been baked and teas served during the round of the Medieval Tour. That transplanted thatched farmhouse was the nucleus of Bunratty Folk Park one of Ireland's leading tourist attractions. It was opened by Erskine Childers Minister for Transport and Power on Friday July 10, 1964

Of course, the house wasn't transplanted stone by stone like William Randolph Hearst's castles, as mud wall is a harder job to move than numbered stones. But the general design and outline was kept, and new material unobtrusively used where the old was impossible to re-employ. The most interesting thing was the motive for re-erecting the cottage and the fact that it was the businessmen of the Shannon Airport Development who launched the idea and not any archaeologist or stubborn preservationist.

It wasn't put up as a tourist gimmick. The motive was to preserve this typical Shannonside farmhouse- side by side with the modern developments of jet-age Shannon-as a reminder, and a sample of older and simpler values, which were in danger of disappearing in the rush of modernisation.

Two standards have been kept strenuously in mind in creating the Folk Park, with authentically being the first. Kevin Danaher the well-known writer and lecturer on country life and folklore, was a constant adviser on the project, and the builder employed was Thomas O'Halloran from Athea, who had an intimate acquaintance with houses of the type needed through renovating or demolishing them. His men included thatcher’s, masons, and carpenters, who had retained the knowledge of traditional crafts of that age.

Three other houses a forge, mountain farmhouse, and a fisherman's house were added on. The forge in bare sandstone and thatch was an exact replica of a County Limerick wayside forge, and it was equipped with all the traditional gear collected from old forges in the area.

The mountain farmhouse was a three-roomed poor farmers house of a type found on the borders of Limerick and Kerry. It also had a loft for extra sleeping space with access by a timber ladder. The fisherman's house was a simple two-bed roomed home of a North Kerry salmon fisherman. Much of the timber would have been salvaged from the sea, and the floor was of clay. The original of this hose was found near the mouth of the river Cashin on the Kerry side. A flat-bottomed boat used by the local fishermen called a gondola was on display nearby.

Vitality is the second criterion aimed at. Though the houses are furnished with authentic exhibits from the Shannonside area -sugan chairs, tables, dressers, settles, four-poster beds, candlesticks, lamps, porringers, salt boxes, and traditional farm tools, -the Folk Park is not a museum. The forge, for example, is an active workshop complete with a blacksmith. Originally it was suggested he should employ himself making ironwork souvenirs, but as soon as the people of the district discovered a working forge within reach again, they inundated him with a constant stream of work- horses to be shod, farm machinery to be repaired.

This little collection of houses nestling under the trees under Bunratty's high tower has the air of a living village- an echo of the cabins in which the Earl of Thomond's people lived centuries ago. Each is painted its authentic colour, the Shannon farmhouse whitewashed, the mountain farmhouse washed in primrose and the fisherman's house in pale blue, while the forge displays the gold and brown un-plastered sandstone. A little oasis of peace within a few miles of new factories and roaring jets, a genuine ungimmicky and lively recall to the rural past of Clare and Limerick.

A new Fairy Trail which encompasses a large part of the folk park, opened on June 23, 2019, with fairy themed events and storytelling from the Queen of the Fairies. It brings children on a magical mystery tour around the stunning 26-acre parkland. The children can visit the Fairy Travel Centre and learn where fairies go on their holidays. They can enrol in the Fairy University and find out what it takes to get their wings. They can also find a quiet nook in the Fairy Library and read from the fairy’s magical book of spells. With a Fairy Water Wheel, Dummy Tree, Wishing Water Lilly and much more, enjoyable hours of endless fun exploring this magical fairy fortress awaits.

To go with this delightful little trail, they have also introduced a brand-new Pet Farm. It is open daily from 10.30am to 3.30pm from June to September. There children can meet some of the folk park cutest and cuddliest creatures including rabbits, lambs, goats, chickens, fawns and ducks. The playground located toward the end of the Village Street, features a timber structure housing four towers constructed from robinia wood with rope walks and belt bridges creates a fortified castellated fun filled tower that gives vantage views to the surrounding country landscape. Further features include a play ship theme, a 25m zip line, and a variety of swings. Bunratty Folk Park opened 55 years ago last Wednesday and it is one of Ireland's leading tourist attractions, and a great place to spend time with family and friends.