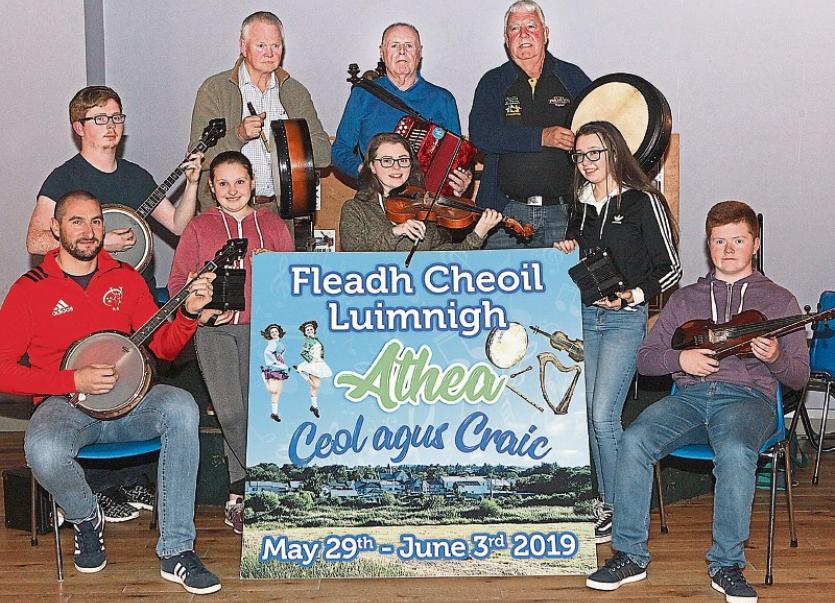 WHEN THE Hawthorn tree is in blossom, and the Cuckoo calls, it is time for the annual Limerick Fleadh Cheoil , which takes place over the June Bank Holiday weekend. Athea is the venue this year, and an action-packed programme of events has been put in place for traditional music lovers by the host Comhaltas branch.

A lot of outdoor events will be held and if the sun shines it promises to be a wonderful weekend. The county Fleadh has been held there eight times since 1975, and in 2001 it was chosen to host the event in a very special year celebrating 50 years of Comhaltas Ceoltóirí Eireann. 2002 was the last time the pretty village by the Banks of the flowing Galey hosted the annual event.

The river that flows under the magnificent footbridge has been immortalised in song and story by many writers including the late Dan Keane. I quote the first verse from his composition titled The Galey.

From marsh and heather mountain, it freely forward flows

To leave Glenduff's black valley on its journey to the shore

As the glittering Glasha Bealtaine joins in at Glenagore.

The plaque on the footbridge reads as follows:

Dedicated to the memory of Pope Paul 11

Athea is a pretty little village nestling at the bottom of a valley at the north side of the high ridge of Dromada which runs westwards from the Ardagh direction. Only about two miles from the Kerry border. Athea stands at an important crossroads, where the road from Glin to Abbeyfeale crosses the road from Rathkeale to Listowel. The name Athea is generally taken to derive from the Irish Ath an tSléibhe, meaning "the Ford of the High Moorland".

As well as being a village, Athea is also a parish. Up to comparatively recent times, however the parish was not known as Athea but as Rathronan. Rathronan was a huge parish comprising, according to Lewis (Topographical Dictionary of Ireland), 18,153 statute acres. At the time Lewis speaks of (1837), 1,000 acres of the parish were under tillage. 5000 acres were meadow and rich pasture, and the remainder consisted of mountain pasture, plantation and turbary. The land in the eastern portion -towards Ardagh-was , Lewis states "of good quality being based on a substratum of limestone and produces excellent crops under a good system of cultivation".

We do not know when the village of Athea came into existence, but it appears on an estate map of 1710. At that time, it would have been a very isolated village, situated in a wild and largely inaccessible country. The road from Glin to Abbeyfeale , which now passes through it, had yet not been constructed, nor would it be for another 120 years or so. In fact, it was the building of that road that was to prove the principal factor in the development of Athea.

The famous Gaelic poet, Micheál Og O'Longáin - whose father was a steward to the Knight of Glin in the latter part of the 18th century -was born in County Cork, but, when growing up, returned for some time to his father's native district and opened a hedge school in the neighbourhood of Athea. Sixpence a quarter was the fee he charged his pupils; but they proved very bad payers, so much so that a very bitter and disappointed Micheál Og penned this quatrain about them:

Miserable my business and poor and impoverished my calling

Teaching the young, and not well do they pay me

I promise ye, every immature youthful boor in the country

That"twill be long before my likes comes among them again.

A focal point in the village is their community hall which is named after Con Colbert one of the executed leaders of the 1916 Rising. He was born in Monalena, Castlemahon but he spent his youth in Athea. The President of Ireland Erskine Childers officially opened it on January 20, 1974.

Famous people associated with Athea include author Kevin Danaher who worked for the Irish Folklore Commission collecting folklore and recorded it in ten books. Maighréad Mc Grath a renowned historian who was at the forefront in promoting all Athea's history. Domhnall De Barra a past President of Comhaltas Ceoltoirí Eireann, and a member of the present committee who are organising this year's Fleadh.

Timmy Woulfe a former school master who has been involved in a positive way with most of the parish organisations. He is highly regarded in Set Dancing circles at present as a teacher and a collector of our past dances. He was a member of the Athea set dancers who won the All Ireland Senior Scór final in 1978, with his wife Nancy, Pat and Gretta Enright, Joe Murphy, Margaret Cotter, Tim O'Keeffe, and Mary Barry. The following is the second verse of Pat Brosnan's ballad about their win.

'Twas the Scór competition of seventy-eight

Those dancers they practised both early and late

They won out the West and the County hands down

Then they went on to capture the big Munster Crown.

While the Fleadh Cheoil will be in full swing, Athea native Tom Moran will be involved in an abseil down the Red Cow Hotel in Dublin. Tom has enjoyed an action-packed life, from growing up in Knocknagorna in rural Athea, to becoming the first publican in the country to pay over one million for the Red Cow Pub in 1988. Three years ago, a stroke caused Tom to sustain a fall whilst on holiday in Spain causing a significant injury to his head. He underwent a craniotomy and spent 6 weeks in an induced coma in Carlos Haya Regional Hospital in Malaga before being air-lifted back to St James Hospital under the care of neurologist Dr Colin Doherty. He spent a total of 312 days in hospital and he has defied all odds and has made an incredible recovery.

Tom is getting stronger daily and is excited about the abseil with family members and friends. On Sunday June 2 to mark the 3rd anniversary of his near-fatal brain injury he will abseil down the 9-storey extension of the family Hotel. Tom’s goal is to help the hospital that helped him to make a positive recovery, and his aim is to raise €200k to build a dedicated Brain Disease Resource and Research Centre at St. James’s Hospital. He will be joined by his wife Sheila and children and we wish all a safe landing.

The village of Athea at present has a lot to recommend it to visitors, who will flock in their thousands to enjoy its musical heritage this weekend. They will be able to visit the Fairy Trail and admire the wall murals.

The Tidy Town Committee recently erected 20 place name signs around the village, and beyond which connect to make a lovely walk.

There is something about Athea as a venue for a Fleadh, as it has an atmosphere of its own. This is due in no small way to the hospitality of the local people who know what a Fleadh is all about and make the visitor feel at home. They are proud to host the near long week festival which attracts people from all corners of the county and beyond. Enjoy the experience.