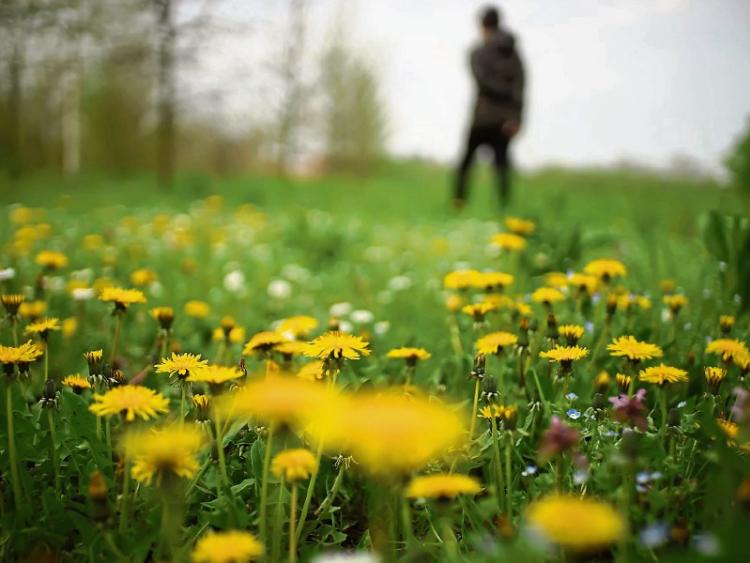 DANDELIONS ARE one of Ireland’s most successful and recognisable wildflowers and they are widespread all over the island.

They will grow almost anywhere and can be seen in meadows pastures parklands gardens hedgerows and along the roadsides at present. They grow in abundance in early spring and summer and continue to flower and grow seed into autumn.

Dandelion’s take their English name from the French ‘’Dent-de-leon’’, or Lions teeth referring to the toothed edges of the leaves. In Ireland the flower is associated with Saint Bridget and was called ‘’the flower of Saint Bride’’, or ‘’the little flame of God’’. Their yellow flowers and downy seed-heads are easy to recognise, and it is underrated as it plays an important role in nature.

A lot of insects rely on the dandelion for food for themselves and for their larvae. Birds such as the goldfinch use the seed heads as a valuable food source. The bright yellow flowers with their amounts of nectar act as a magnet to pollinating insects such as bees and hoverflies, and moths and butterflies lay their eggs on the dandelion leaves.

The dandelion enjoys a love hate relationship with the people with many sections singing its praises while others cannot stand the sight of it. Dandelions are among the first plants to grow on waste ground helping to stabilise the soil conditions. They help to attract other species there and this leads the way for the ground to develop.

When we were children, we collected the dandelions and blew the seed heads and watched them floating away in the breeze. We were helping to spread the dandelion population, but we did not know it at the time. Its ability to colonise new places quickly and to out compete cultivated plants do little to please gardeners or crop growers who see the dandelion as a pest and would like to eradicate it.

The long central root of the dandelion is very effective in drawing nutrients from very deep in the soil. The nutrients transfer to the leaves while growing and when the dandelion is pulled up or dies away, they are released back into the surface of the soil and are available to other plants. Dandelions are ideal as compost material or mulch because of their nutrients value.

When I was young, we kept baby chickens and we fed them dandelion leaves with their food. It was my job to collect the leaves from around the areas they grew in. The young chicks would get very excited when they saw them arriving and they would devour them and look for more with open mouths. The young leaves were also used as a green vegetable and for salads.

The flowers of the dandelion can be made into dandelion wine which can be used as a tonic and the dried leaves can be used for making herb beer and dandelion stout. The dried roots when roasted and ground are supposed to make an effective substitute for coffee. In the past the curative power of the dandelion has been advocated as a treatment for many ailments. They included gall stones, jaundice, haemorrhoids, warts, dropsy liver and stomach complaints.

Many people dismiss the dandelion as a useless weed, but it plays its own important role in nature. It has many useful uses that people have benefitted from through the ages and continue to make use of up to the present day.

CLUTTER in its most common form, is the residual of passion for collecting items with emotional value. People tend to keep different stuff which later become useless and even annoying and creates problems for those living in that household. No one can be stopped from keeping stuff, but the least that can be done is to learn how to control this weakness for keeping such objects. I must admit being a collector of material which I always feel will come in useful some day. I hold on to things far too long which lead to a lot of clutter.

I cannot recall clutter being a problem when I was growing up when families were larger and houses smaller. People had a lot less money to spend and space was limited, and items were built to last a lifetime. People had only limited possessions and items were repaired to last longer. Animals and pets disposed of left-over foods, and the open fire was used to burn items.

There are several reasons why we keep thing’s which we should have got rid of much sooner. When we are de cluttering, we often come across items that we have received from some kind hearted family member or friend. We feel guilty if we have not used it and guilty if we give it away. We may be afraid they will find out if we give it away and they will be disappointed. This postpones our decision and the clutter builds up.

Items of sentimental value are the hardest of all to de clutter as they can recall a fond memory from the past. We acquire so much memorabilia over the years that are lovely to keep. Unfortunately, though the feelings attached to them sometimes lead people to keep everything. Sentimentality can make it very difficult to reach a decision, and we can offer excuses for keeping them. We should ask ourselves are these excuses good enough or is it fear of letting go or maybe sadness, making us defer the decision. If we consider everything precious then nothing really is, and we should only keep the items that are our real treasures.

The cost of an item can also be a factor as we want to get our money's worth from it. Most of us from time to time waste money on an item and then we never use it. It may be a pair of expensive shoes that make the feet sore, or an item of clothing that is too small or the wrong colour. We feel guilty because we have wasted our money, but we keep it just in case we may get our money's worth out of it. The item is left gathering dust and the decision is postponed until the next time.

Most adults have a hobby or a collection of stuff which is their passion. Some have art work video tapes, games, books, cards stamps, recipes, etc. The experts say that even the tidiest people have such a weakness. With creative and good organisation these can be stored away in cases and shelving. The idea that organised people can't be creative and creative people are naturally messy is a myth. The creativity is within us and tidying up does not remove it. Clutter just slows down our opportunity to be creative.

When people decide to remove the clutter and learn to stop collecting it then they can break the emotional attachment. This can be done simply by trying to get rid of an object you admire. After a few weeks pass the object will be forgotten about. Time passes and life continues as possessions are temporary and they can be recycled or donated. Learn to be more ruthless with the possessions as they can be of benefit to others. Most local communities have bins in place to accept items for recycling and clubs hold clothes collections as fundraisers.

On this Good Friday the people of Limerick will come out in force to participate in a massive cleanup of their local community as part of the Team Limerick Clean-up event. It is a day for making sacrifices so we should get involved and play our part in cleaning up our county.