Spotlight : Portrait of an artist - as a young woman 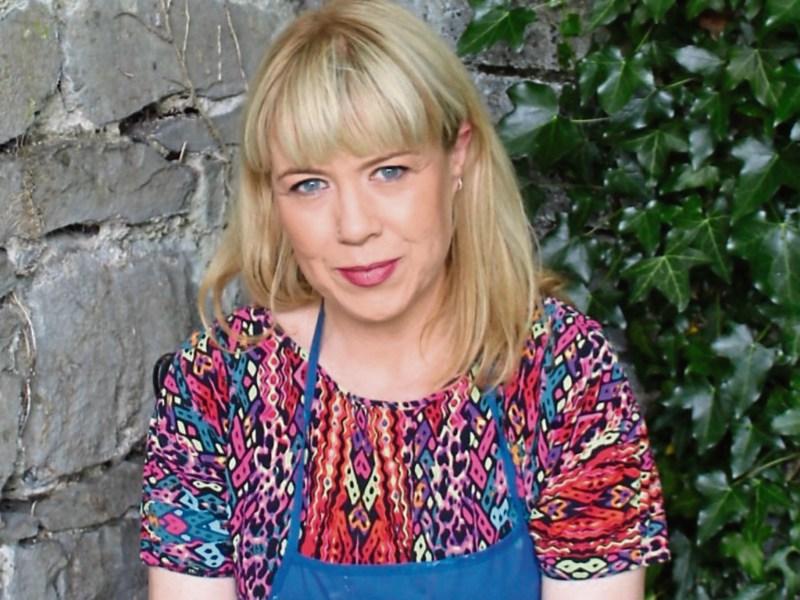 When I first saw the work of Limerick artist Gillian Kenny Shinnors I thought that it seemed reminiscent of 1950s/1960s art deco poster/TV advertising.

Whether it is the style of comic book drawing (now known as graphic novels) or the vibrant colouring (or perhaps a combination of both) it seemed ‘familiar’ and ‘warm’ but more than that, it has a unique stamp of individuality that makes it stand out as a Kenny Shinnors – in other words, a recognisable style.

I’m not suggesting that it is nostalgic in a backward-looking sense or derivative. Rather, her work is not just fresh but refreshing and I found myself lingering in the presence of her paintings because they made me feel in touch with something that I couldn’t quite put my finger on.

Then I read this extract from Catalogue Essays by Mike Fitzpatrick for ‘A Place to Stay’ and it confirmed my opinion that Gillian’s work is rooted in the myth of nostalgia that is embedded in the romantic imagination and that the colour palette is significant too:

“The starting point for Gillian Kenny Shinnors new body of painting comes from a collection of old picture postcards and self-generated images collected during her travels in Canada and North America. She was initially attracted to the compositions, juxtaposition of people, architecture and the particular colour palette in these postcards. These images of the places we love and cherish do not exist in our cold world of reality. However they thrive in the world of our imaginations. Hence the delight in being in one of our favourite places in our consciousness, or happening across an old postcard of favourite views which is akin to a validation of the pictures we carry in our mind, only better…”

Gillian confirmed my appreciation of her work “I am interested in the colouration of early Kodachrome photography which is referenced in my palette.”

Gillian Kenny Shinnors has had many exhibitions of her work, locally, nationally and internationally. She was born in Limerick and studied at the Limerick School of Art and Design and completed her MFA at the University of Ulster, Belfast in 2003. She was awarded the Countess Markievicz medal for painting by the United Arts Club Dublin in 2000. She has exhibited her work regularly at venues such as EV+A, the Hunt, and Limerick Printmakers, and the Lab, Foley Street Dublin.

Gillian completed a large scale solo exhibition curated by Mike Fitzpatrick at Limerick City Gallery in 2008. She has also exhibited her paintings at the Spectrum Gallery London, The Phatory NY, and the Engine Gallery Toronto. She has been involved in many social practice and community projects over the years including the Arts Council Artist in Prison Scheme. She now lives in her native city of Limerick and works from her Studio at Vereker Gardens.

Her work has been described by Irish Times Critic Aidan Dunne as “crisply and expertly painted…” a comment which, if it were to stand alone, is mere praise for technique and clarity but falls far short of an understanding of the soul of this artists work.

Many motels feature in her paintings, places she stayed in and photographed, on the road out of Toronto heading towards the Niagara region. Having returned to Ireland it was these paintings that led her to look at old postcards (some Victorian) and see their potential aesthetic in developing her ideas.

These particular works featuring dislocated hotels and diners, although contemporary in feeling, are still familiar. These for Kenny come from our memories of road movies and other photographic sources. The images, though typically American are also familiar in other ways, as they echo the spread of the global franchising malaise which make the edges of most cities interchangeable across continents, including, for example, Limerick.

Barrington’s Pier is one of my favourite places on Earth. I have a very strong romantic attachment to it, as do many Limerick people. It is a place where courting couples could sit and rest from their walk and talk and imagine a future together. In this painting Gillian depicts not merely and a place that is familiar to Limerick people but a landscape that has a romantic resonance.

If ever there was a sacred place in Limerick this is it. In the selection of this pier as a subject for a painting Gillian has marked her territory as an artist with a romantic vision.

“It has been a favourite spot of mine for years which I walk to regularly. A few years ago my beloved emerald green benches were replaced by new aluminium versions” says Gillian. This artist has not just a visual aesthetic sensibility but is also in tune with the literary awareness of poetry and she proudly acknowledges her love for the work of Patrick Kavanagh. She takes to heart his exhortation for us to see - the newness in every stale thing.”

That perception is central to her artistic vision and expertly brought to fruition in her work.

“The cement factory and the industrial units across the river have never bothered me, or taken from the vista. A treat is to see a ship coming into dock and I am always joined by passing strangers eager to enjoy the view. This painting is a celebration of a local gem” she says.

Like many Limerick people Gillian was fortunate to spend every summer of her childhood in Kilkee Co. Clare. “These vivid autobiographical memories strongly inform my work” she says. She is currently developing a new body of paintings, which excavate these nostalgic memories which are bittersweet in the era of this pandemic.

“The notion of being on holidays is now elevated into a cloud of affectionate nostalgia through which the idealised environment of the seaside of the past is viewed. This is the sentiment I aim to explore in these paintings, by appropriating imagery from old photographs, and creating landscapes which include familiar scenes and landmarks.”

Her painting Italian Riviera is based on an old postcard and is in the permanent collection of Limerick City Gallery and often taken out during the summer months due to its popularity with viewers.

The costumes and colouring cue nostalgia which opens up our sentimental attachment to the past, to, perhaps a simpler and more beautiful way of life. We know that we are being drawn into a world that no longer exists (if it ever did) but we willingly suspend our cynicism and linger and long for that world.

Vivid autobiographical memories and influences from film and early Kodachrome photography strongly inform the work of Gillian Kenny Shinnors. Her work excavates strong photographic references through the use of painterly language.

Kenny Shinnors generates her work not only through appropriating imagery from old photographs but also self- generated imagery which includes familiar scenes and landmarks. Her unique perspective includes strong pictorial compositions, juxtapositions of people and architecture and her distinctive strongly saturated palette, capturing light and shade.

As a footnote (and I believe it should only be a footnote) to this artist’s public persona I should mention, for those who may not know, that Gillian is the daughter-in-law of renowned artist John Shinnors, whom she acknowledges as a mentor. Great credit is due to her for emerging from that long shadaow to shine as a superb artist in her own right.

Gillian has a batch of new (2021) oil on canvas paintings which will feature in the exhibition ‘Continuation’ opening September 9th in The People’s Museum of Limerick – COVID restrictions permitting.

You can visit her website to see her most recent work kennyshinnorsartist.com