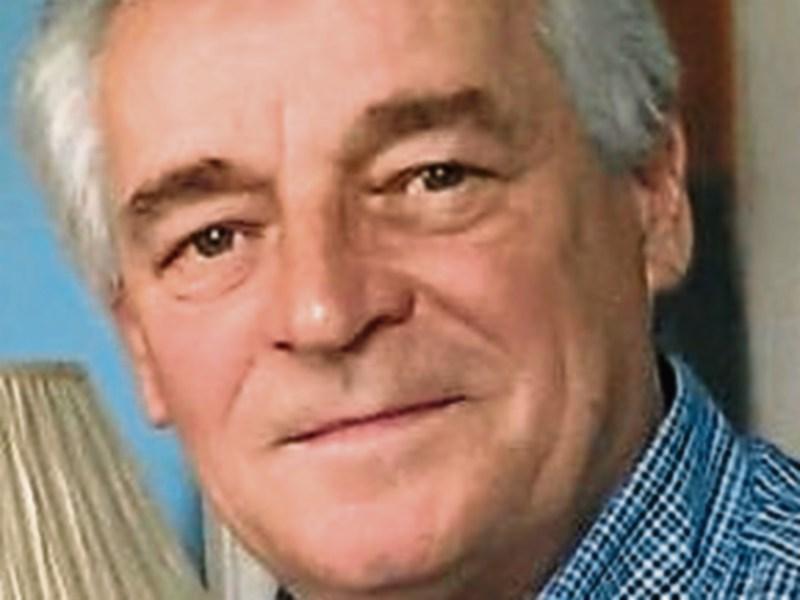 John Liddy with his most recent work Arias of Consolation

Originally from Youghal, John Liddy moved to Limerick when he was four and grew up in the city and became very much part of Limerick’s literary scene.

There is a photograph of John hanging on the hallowed walls of The White House pub together with his poem, ‘Pound Devalued in White House.’ The title was given to John by the late Séamus Ó Cinnéide, who wrote for the Limerick Leader. It tells an interesting story. In the summer of 1975 Robert Graves (English poet, historical novelist, critic, scholar and classicist who produced more than 140 works in his lifetime) visited Ireland as guest of honour at a poetry seminar held in University College Cork (UCC).

Graves, who had Irish ancestry, was expected to visit Limerick. His father, Alfred Perceval Graves (an Irish poet best known for ‘Father O’ Flynn’) was an important figure in the Irish literary revival. His grandfather, Charles Graves had been the Anglican Bishop of Limerick. The anticipated visit would surely bring him into The White House, renowned as a haven for local literati. There was a picture of poet Ezra Pound hanging in the pub and the proprietor, Eammon Gleeson, removed it, so that Graves (who disliked Pound) would not be offended – hence the title of the Liddy poem!

Liddy was encouraged by teachers Eric Lynch and Jack Noonan. When Nora McNamara discovered his first attempts at writing poems (during her typing class) she confiscated them for a few days and then told him that she would like to publish a selection.

That was Liddy’s first book, titled Boundaries (1974). The same year John won the under 21 poetry prize at the Listowel Writers’ Festival. Encouraged by those events he began (with Jim Burke) a literary review (1975) called The Stony Thursday Book.

Liddy had his first poems accepted for publication by The Limerick Weekly Echo (edited by Arthur Quinlan) and by the Castle Poets’ anthology (edited by Kitty Breedin, William English and Claude and Darina Byrne).

The 1970s, its people and places, and particularly the violent climate of Northern Ireland, were very powerful influences on Liddy’s work. The world outside Ireland seemed to be full of merrymaking whilst the Irish suffered the daily brutality of news of bombs and deaths. After a seven-month journey (1979-80) around America “reading my meagre poems and lecturing on Yeats and Kavanagh” says John, “I attended a hunger strike funeral in Belfast and saw, at first hand, the horror and injustice of that devastated place.”

In search of new mythologies, he left for Spain, arriving on October 12 (the national day of Spain). He became a teacher and a librarian, taking his degree with the University of Wales, and “set about writing down what caught my eye, never losing sight of my roots” says John. He was happy with his new life and a girl called Pilar whom he later married and had two sons with, Marcus and Seán.

After some years editing The Stony Thursday Book (1975-1980 and again in 1990/91) and a long time dedicated to translation, he published The Angling Cot (Beaver Row Press, Dublin, 1991) which contains poems about Limerick and also his earliest Spanish experiences. Then came Song of the Empty Cage (Lapwing Publications, Belfast, 1997). This is a book about departure, the journey he set out on, leaving Ireland and its political pains, and interspersed with chosen translations from Irish and Spanish poems.

This brought him again to translation and working with Trudy Kiebala on Wine and Hope/Vino y Esperanza. (Archione Editorial, Madrid, 1999).

That was followed by Cast-A-Net/Almadraba (Archione Editorial, Madrid, 2003) with translations in Spanish by Liddy’s brother, Liam, and illustrations by Gavin Hogg.

Again he returned to early memories, people and places, but the poems were more structured and explored the relationship people have with places where cultures merge into one.

The late poet Desmond O’ Grady said “Liddy’s poems reflect the places he has lived in that forged his life, the people he met and was moved by and by the paraphernalia of daily life that inspired him to write poems about his experience.” Liddy has received praise for his work by many established poets, such as Knute Skinner and the late Patrick Galvin. The latter on rereading The Angling Cot and Cast-A-Net poems has said he was “…once again reassured of the strength of their rhythms, the power of their images, the sureness of their language and the writer’s ability to reflect a reality or an aspiration through poetry.”

Liddy was born, reared and educated in Ireland so he naturally identifies with Ireland’s poetic traditions. But he has also extended his horizons by living in Spain. “One of the first poets in the English language I began to sit up and take notice of was Thomas Hardy and to this day I prefer to read his poems rather than his novels, with the exception of Jude the Obscure” says John.

Further study beyond what was picked up in school, brought John to a wealth of Gaelic poetry from which he learned about Bardic Schools and how a poet had to learn his trade for twelve years before he could be a member.

W.B. Yeats, Austin Clarke and Patrick Kavanagh were early influences on John. Delving deeper, two more writers came into his life when he was looking for answers to all sorts of psychological and philosophical questions and both went a long way towards helping him to unravel some of life’s complexities. “For a number of years James Joyce and Samuel Beckett became my confessors” says John, adding, “I battled and brooded over their books and looked for signs, insights, messages and hope against my most despairing moments.” There were others, such as Rimbaud, Rilke, Pasternak, Lorca, Machado, Hernandez, Neruda…

John has some advice for aspiring poets, “Today, the poet has more than ever to exercise the two faculties at his or her disposal – intuition and imagination. Both bring the poet close to the frontier of words to learn from the first experience of silence that the real presence cannot be entered unless it is reached through silence.”

His most recent work Arias of Consolation (Revival Press) is a book-length poem in eight parts divided into 50 sections with drawings by John Shinnors. “I suppose it’s my most ambitious work yet. I hope the people of Limerick will identify with it” says John.

I asked John “Who is your favourite poet?” knowing what the answer would be, “I honestly have many, from North and South America, Ireland and Spain, Chinese, Russian, European, male and female.” He deftly side-stepped my question, “Who is your favourite Limerick poet?” His answer – “To paraphrase O'Grady, I would like to see all poets drink at the common oasis, where nobody is best, better or worse.”

He is currently working on a collection of short stories and gathering together prose and travelogues written over the last 40 years. “Pandemics are good for tackling chores that one has left on the long finger” says John.

Apart from The Stony Thursday Book and its sister publication Pebble Broadsheet, John has edited school magazines, co-edited with Dominic Taylor 1916-2016 – An Anthology of Reactions and Let Us Rise – An Anthology Commemorating the Limerick Soviet 1919. He has guest edited an issue of The Hong Kong Review (he is on the Advisory Board) and Someone Is Always Watching You by Séamus Mas Aogáin and various books for children.

The following poem was written by John Liddy for his nephew’s wedding (August 10, 2019) and it is a particular favourite of the poet:

“A frontier does not alter the terrain.” (Marcel Proust)

at a point in the river Bann, the precise meeting place

is indistinguishable to a fish or a bird in flight,

and the water where the map says this is the line

tells a lie, divides and condemns you to differ,

for it runs off your hands like familiar rinsing

after a bout of weeding on one side or the other.

in the middle of a meadow beneath a blazing sun

where two people reap a harvest of wheat,

the map will tell you if you have crossed the line,

broken a rule on one side but not on the other,

the flattened stalks climbing to their natural height - while you sleep in a no man’s land together.