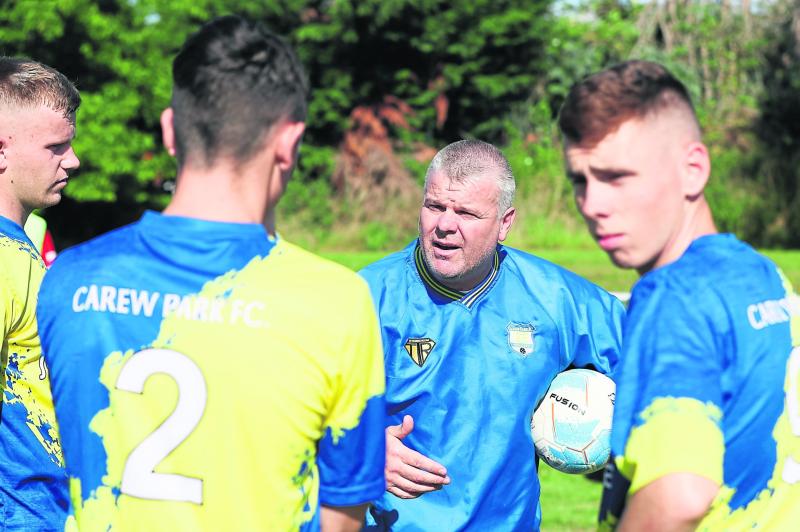 A huge crowd turned out for the top billing game on Thursday evening between Carew Park and Ballynanty Rvs and were treated to a thrilling encounter that saw the side share six goals and the points.

Pat Boyle fired Carew ahead with a superb free kick and before the break Arron Nunan fired home a second for the home side.

Carew were looking very dangerous going forward against an out of sorts Balla XI.

Thomas Byrnes blasted in from close range in the second half.

Minutes later the sides were level when Gbadebo Habideen was in the right place to guide the ball home and it looked like there would be only one winner at this stage.

However, Carew struck again when Nunan beat the offside trap to fire home to huge excitement.

Once again Balla, buoyed on by the fresh legs of their replacements, went for it and got their reward when Habideen scored again after having his initial effort saved.

Both sides had chances to snatch a winner but in truth, both side’s effort’s deserved something from the game.

The top of the Premier League is taking on a familiar look with last year’s top two again holding sway.

Fairview received the points when Prospect were unable to field while Pike did it on the field putting five past Janesboro without reply.

Two goals from Kevin Barry put them on their way and Colm Walsh O'Loughlin matched the feat to leave the Hoops well in command. Danny O'Neill completed the scoring from a penalty kick.

At the other end of the table, two sides looking to get off the mark met when Nenagh hosted Coonagh Utd. The Tipperary side showed plenty of promise in their first couple of games and it all clicked into place tonight when goals from Matt Spain (2), Kieran O'Brien and Dylan Morrison secured an impressive win. Ger Myles replied for Coonagh Utd.

Another two sides searching for their first points met when Mungret hoisted Charleville.

Shane Dillon put Charleville in front and while Mark Patterson levelled the tie, the Cork side were not to be denied as Gary Ward struck from a penalty kick with the winning score.

In the Premier A League, Geraldines picked up three impressive points at Kilmallock for their second win. Kane Connolly and Trevor Hogan were on the target for the winners.

Michael Curran (2) and Niall Loughran were on the mark for Aisling who shared six goals with Cappamore for whom Ronan Hanly bagged a hat trick.

In Division 1B, Janesboro beat Newport 3-1 with scores from Brian Nugent, Alex Mason and Jamie Cross.

Patrickswell got off the mark with a 6-2 win over Glenview. Mark O’Halloran scored a hat trick. Dave Buston, Paul O’Brien and Dara Phillips also scored for the winners.

In Division 2A, Nenagh B posted the result of the day beating a fancied Aisling Annacotty 4-1. Goals from Diarmuid Fitzpatrick, Marcin Kolkowski, Kieran O’Brien and an own goal were answered by Kyle Brogan’s reply.

Evan Walsh, Damien Ryan and Brian O’Keeffe scored for Murroe B in a 3-2 win over Athlunkard Villa B while

Corbally Utd B eased past Kilmallock B thanks to scores from Cian Moore (3), James Kelly, Rian Barrett and Eoghan Carr.

In Division 2B, Oisin O’Grady scored a hat trick for Herbertstown in their 3-3 draw with Croom Utd for whom Dylan Murphy, Gary McInerney and Jamie Greaves replied.

Pike Rvs B proved too good for a young Shelbourne B as Jamie Hogan, Mick Lipper, Diarmuid Grimes, Noel Whyte and Paul Goodman were among the scorers.

Gavin Noonan, Jay Hickey and Tom Ward netted for Coonagh Utd B in a 3-1 win over Dromore Celtic.

In Division 3A, Barry Quinn (3) and Dean O’Brien (2) scored in a 5-2 win for Ballynanty Rvs B over Newtown Rovers. Colin Nolan and Stuart Hoare scored for the home side.

Two goals from Liam Enright helped Knockainey to see off Parkville B.

Jake Murphy and Dylan Franklin were on target for Northside, but Lisnagry B took the spoils thanks to scores from Eric Sheehan (2), Tristan O’Sullivan and Greg Coulter.

In Division 3B, Granville Rgs B proved too strong for Caherdavin Celtic B and ran in scores from Jamie McNamara, Andrew Brosnahan, Dylan Meehan, and Eoin Quigley.

Corbally Utd C went down by three goals to Brazuca B thanks to strikes from Pedro Naves, Christian Rosas and Matheus De Paula.

Geraldines B beat Moyross B with scores from Shane Waters (2) and Anthony McNamara while Summerville Rvs B and Carew Park B played out a 1-1 draw with Adam Slattery netting for Carew, Oussoubi Niakate for Summerville. .

Darragh O’Connor’s hat trick gave Pallasgreen three points in a 3-2 win over Mungret Reg in the Youth Division One.