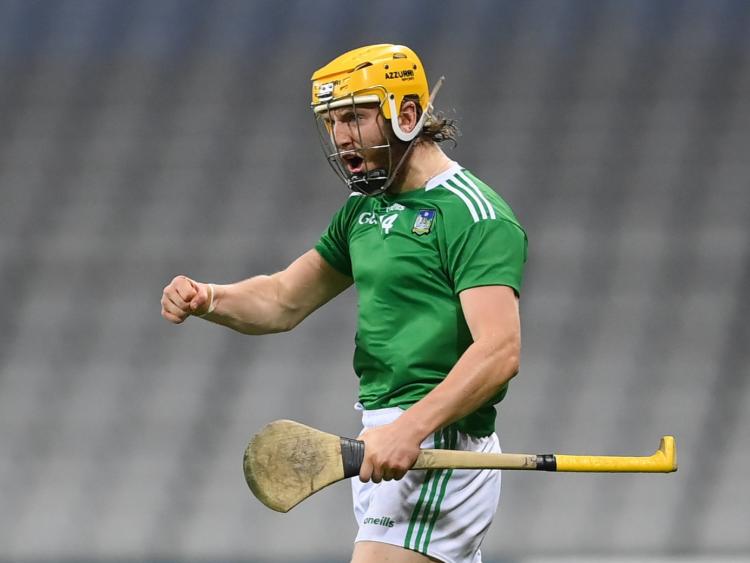 Celebration time for Seamus Flanagan and Limerick in Croke Park

John Kiely's heros blitzed Waterford in this Sunday's Croke Park showpiece to win a second title in three years - the first time since the 1930s.

Limerick led from start to finish, bar two minutes when level early in the first half.

John Kiely's men were six points ahead on the 25th and 33rd minutes but on both occasions Waterford found the next three points to reduce the deficit.

It was a half in which Limerick had seven scorers accounting for 12 points from play, while Waterford had just three points from play - relying on seven pointed frees from Stephen Bennett.

There were no goals when the sides met four weeks previous in the Munster final but both had first half chances of green flags here. Stephen O'Keeffe heroics denied Kyle Hayes and Cian Lynch with a double save in the 11th minute. At the other end Jack Fagan was wide with a first minute chance and Nickie Quaid saved from Stephen Bennett in injury time. Overall, four Limerick wides in the half, with two more for the men in blue and white.

Tom Morrissey had the honour of opening the scoring and added another two before the half time whistle. Seamus Flanagan was also an early Limerick scorer but the final was level in the sixth minute, 0-2 each.

The next four scores went to Limerick - Gillane with two frees and one of his three first half points from play. Limerick now 0-6 to 0-2 ahead.

In the 14th minute Austin Gleeson had the first Waterford score from play but William O'Donoghue and Declan Hannon found the range from distance to ensure Limerick were 0-8 to 0-4 up at the water break on 19-minutes.

When Gearoid Hegarty and Hayes added their names to the scoresheet the lead was out to six points for the first time and Waterford now without injured centre back Tadhg de Búrca.

Liam Cahill's men responded with three points but back came Limerick with four of the next five points - Gillane, Morrissey and Hegarty all with impressive scores for a 0-14 to 0-8 lead and 33-minutes played.

But that lead was reduced down to just a single score by half time with Waterford making the most of the three minutes of injury time.

Limerick raced from the blocks in the second half and the lead was soon out to seven points for the first time - Flanagan, Hegarty and Gillane all on the mark.

By the time Hegarty had reached five points from play the lead was eight points and the second half not yet 10-minutes old.

Unrelenting Limerick continued to pour forward and soon had 19-points from play and a nine point lead.

Bennett had his first point from play to leave it 0-24 to 0-16 at the second half water break and 51-minutes played.

Waterford needed a goal but Nickie Quaid stood firm to save from Bennett and Calum Lyons in the 55th and 57th minutes.

With Hegarty up to seven points from play and sub Pat Ryan on the mark, Limerick were nine clear with five to play.

And, soon 10-points with Diarmaid Byrnes the ninth Limerickman to score.