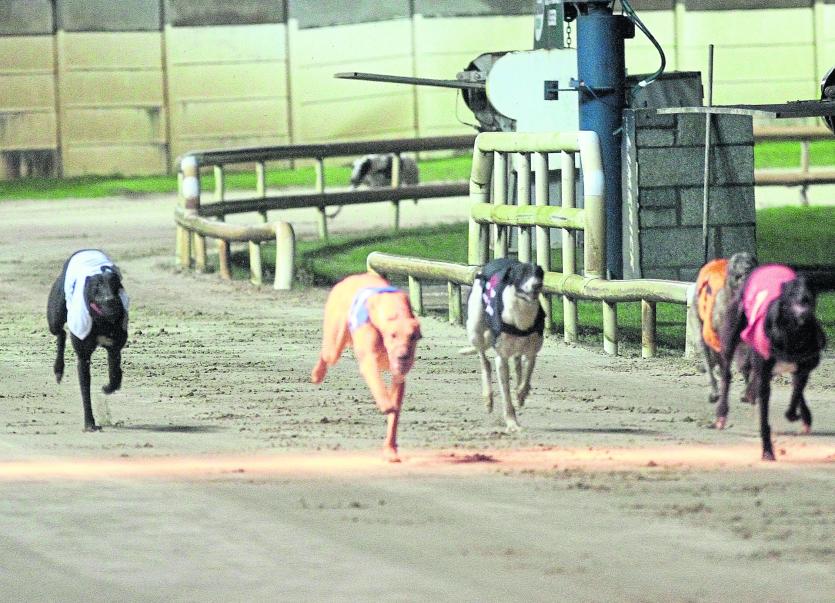 Greyhound Racing Ireland has announced that the remaining rounds of the Irish St Leger from Limerick Greyhound Stadium will be streamed free to view.

The semi finals take place this Saturday with the final the following weekend.

The live streaming on www.igb.ie will feature the full race card live from Limerick Greyhound Stadium on the relevant Saturday night.

So, while attendance may be restricted to the 'one dog, one person' Covid-19 rule, fans can watch the exclusive racing action online from from 7.39pm.

Fans can still watch racing and place a bet as normal on Barking Buzz.

THE 2020 Friends of Limerick Greyhound Stadium Irish St Leger is down to the semi final stage this Saturday evening.

Twelve remain in the chase for the €30,000 winners prize in the big Limerick event of the greyhound calendar.

Liam Dowling of Ballymacelligott has stole the show to-date and will have three runners in Saturday’s semi finals.

In last weekend’s quarter finals, it was Ballymac Wild that set the fastest pace.

In the first of the four quarter finals, the Dowling runner finished with 29.40 for the 550. The winner had three and a half lengths to spare over Epic Hero for Gerard Hutton and trainer Thomas O’Donovan. Third and also qualifying was Amazing Alice for trainer Patrick Guilfoyle and owner Peter Sutcliffe.

Oran Don won for trainer Maire Gilbert and owners Elliott Whyte and Johnny Crehan in the second heat. The winner had half a length to spare in a time of 29.96. Second was Priceless Jet for Paul Hennessy and owners Bryan and Kathleen Murphy. In third was Michael Corr’s Meenagh Miracle.

OutNumbered won for Mark O’Donovan and owners Bernadette Diskin Holian and Basil Holian in heat three.The winner’s time was 29.73. A length back in second was Ballymac Anton, whuile in third was Cash Ready for trainer Denis Fitzgerald and the Cash Ready syndicate.

The final heat was won in 20.13 by Ballymac Kingdom. The Dowling winner had half a length to spare over NewInn Hero for Graham Holland and owners Simon Taylor and Marc White. In third was Knockboy Flight for Kevin McLean and owners John and David O’Herlihy.

Elsewhere on last Saturday’s card in Limerick were five round one heats in the Limerick and Clare GOBA A3 525.
The night opened with an ON3 525 – won in 29.12 by GoToon Frankie for Austin Noonan. The winner had nine lengths to spare on the line. Second was Killeacle Toto for Peader O’Dwyer.

There was an A7/A8 525 win for Blackboy Lucky for Jeremiah Kirby. In 29.79 the winner had a winning margin of three and a half lengths. Second was Mine Beauty for Frank and Mary Browne.

There was also the usual racing in Limerick last Thursday.

An A4 525 opened the night and Ronny Wuyts had a winner with Vigrous Toby. The winner’s time was 29.17. Six lengths back in second was Hidden Icon for Eamonn Quinn and owner Michael O’Brien.

Bright Dream won an A5 525 for Mary Lynch. The winner was two lengths clear on the line in a time of 29.17. Second was Stonepark Ali for John Rainsford and owner Michael Sean O’Dywer.

Noel Moroney won with Tiermana Caramel in an A1 525. The winner’s time of 29.09 secured a victory of a length and three quarters. Second was O Garney Rio for Helen Coffey.

The Donal Cooney trained and John Whelan owned View Champ won an A6 525. The winner was seven lengths clear on the line in a time of 29.27. Keeperhill Tipp was second for Barbara Rees Jones and owned Nicholas Colton.
Mary Crotty had Inislosky Urchin as an A2 525 winner. In 28.66 the winner earned a five lengths success. Second was Tally Ho Midas for the Walls of Tally Ho syndicate.

Barbara Rees Jones did get a winner on the night – Keeperhill Sally winning an A3 525. The winning time was 29.25. A length and a half back in second was Iron Sky for Eugene Corkery.

Aarons Sensation won for the Shanakyle syndicate in an A5 525. In 29.11 the winner was four lengths clear on the line. Second for Susan Hayes was Orlando Breeze.

Ballymartin Mac was a winner for Sean Roche and Pat Keyes in an A4 525. The winner’s time was 29.57. Second, a length and a half back, was Eight Nine Ten for Gerard Ryan.

Hidden Jaylo won for Kathleen Browne in an A4 525. The winner was two and three quarter lengths clear on the line in a time of 29.30. Second was View Abbey for Donal Cooney and John Whelan.

The final race on Thursday night was an A2 525. Victory went to Mine All Ready for Frank and Francis Browne. The winning time was 29.25. Second, three quarters of a length back, was Full Trottle for Morgan O’Neill.