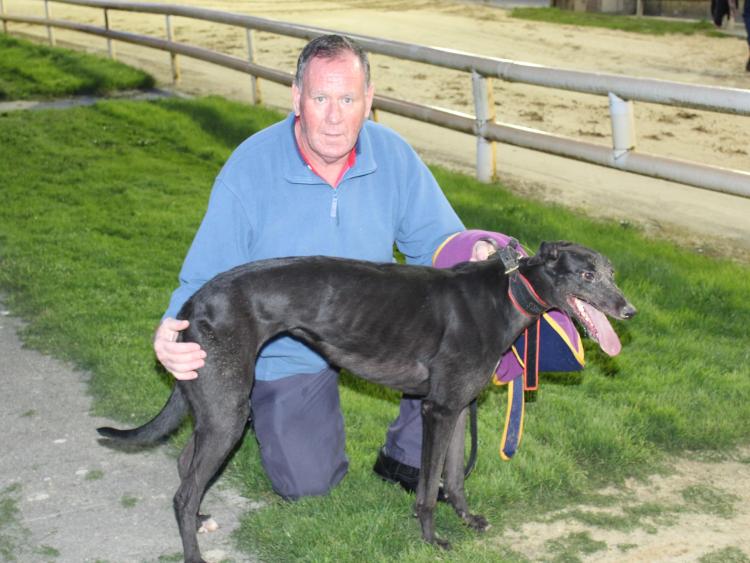 The star of the round one heats was Sporting Pat with a 41.79 run in the opening heat to set the target for all others on the night.

The Jerry Griffin trained and Michael Rowe runner had a length and a half to spare on the line. Second was Redzer Ardfert for Brendan Maunsell and owners Pat Reddan and Kathleen Clifford.

There were four heats in total.

The other heat winners were Beach Avenue in 42.70 for Paul Hennessy and owner Pat Healy; Skillful Daisy in 41.90 for Donal Byrne and owners Daniel and Eddie Casey and Springwood Vardy in 42.42 for Denis McCarthy.

The card opening in Limerick with an A4 525. Victory went to Whats Up Jonjo for the OL syndicate. The winner’s time was 29.06. All of 11 lengths back in second was Knockfinisk Pippa for Timmy Murphy and Phyllis Daly.

Two Amigos was a novice winner for trainer Maurice Fitzgerald and owners Padraig Fitzgerald and Michael Griffin. The ON2/ON3 525  winner was half a length clear on the line in a time of 29.31. Second was Starlight Louie for Thomas and Niall O’Sullivan.

Tradesman was a sprint winner for Noreen Liddy. The S3/S4 350 was won in 18.97. Millroad Knight was second – a length and a half back – for trainer Michael Donnelly and owners Noel Moore and Robbie Donnelly.

Redzer Renae won for Pat Reddan in a novice 525. The winner just got the success on the line in a time of 29.25. Just beaten into second was Floco for trainer Johnny O’Sullivan and owners Noel Sheahan and James Reidy.

There was an Open/A1 525 win for Excess Power for John Kirwan. In 28.93 the winner was a length clear on the line. Second was Inislosky Jethro for Mary Crotty.

Paraic Campion and The Amber Banner syndicate had an A4/A5 525 win with Burning Candle. The winner was four and a half lengths clear on the line in a time of 29.29. Second was Gleesons Missile for Cathal and Jason Gleeson.

Laura Earle won with Whitewood Lassie in an A2/A3 525. In 29.61 the win just came on the line. Narrowly beaten into second was Mohane Vicky for Cormac Davern.

The final race of last Saturday night was an A2 525 and success went to Cormac Davern – going one better than the previous race. His Mohane Duchess won in 29.18. Second – two and a half lengths back – was John Durrigan with Dromrich Antares.

There was also the regular racing in Limerick last Thursday.

Will Chance Him opened the night – winning the A4 525 for Michael O’Grady. The win came in a time of 29.28. A length and a half back in second was Gurtnacrehy Gift for James Kelly.

Liam Carroll had Portdrine Power as an A5/A6 525 winner in 29.90. Half a length back in second was Cathal Gleeson with Gleesons Dream.

In an A6 525 Sheedy Ciss won for John Ryan. In 29.46 the winner had a length to spare on the line. Second was Coosane Warrior for PJ Ryan.

Shane McCarthy had Blackwalk Joanne as an A3 525 winner. The winning time was 29.19. Second, two lengths back, was CragMoher Castle for Gerard Kenny.

Sean Fitzgerald and Thomas Keating won with Carindale Black in an A4 525. In 29.49 the win was just secured on the line.