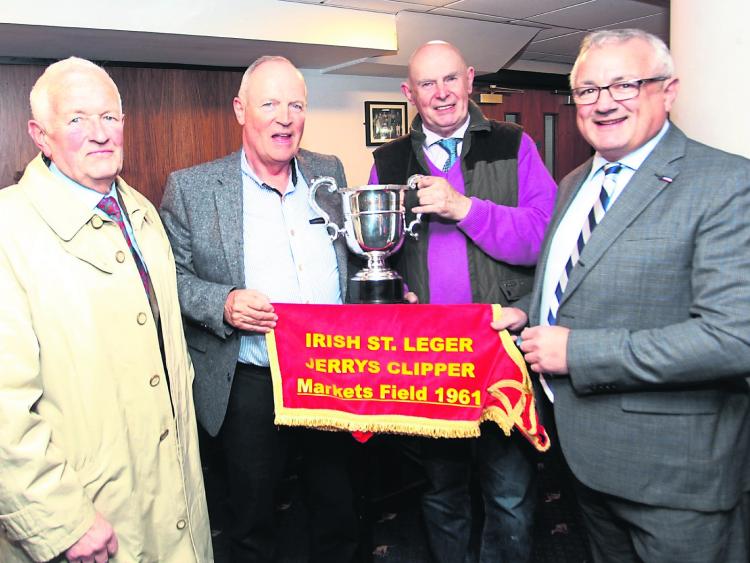 A new track record was the highlight as the 2019 Irish St Leger flew from the traps in Limerick Greyhound Stadium last Saturday.

Jaytee Taylor was the name on everyone’s lips in the large attendance as the competition favourite set a new track record in a time of 29.21 seconds for 550 yards.

Trained in Kilkenny by Paul Hennessy and owned by John Turner, Jaytee Taylor won Heat 8 by all of nine and a quarter lengths in the record breaking run.

Last year’s event was won by Blastoff Jet, for joint owner/trainer Philip Buckley in a time of 29.65 seconds.

Jaytee Taylor is now the 3/1 favourite to claim the Classic win. Wolfe and Run Happy are available at 7/1, with Lemon Ozzy, Ballymac Anton and Lenson Austin all 10/1 and Cabra Firmino, Clonbrien Prince and Priceless Blake at 12/1.

Jaytee Taylor won one of the 12 round one heats where 72 greyhounds were whittled down to 36 ahead of this Saturday’s six round two heats.

Among the Limerick dogs to sparkle in round one were Clearly Written and Music ToOur Ears.

Clearly Written won Heat 6 in 30.18. Owned by Noel Nash and Gerry McManus and trained by Denis O’Malley, the winner had one length to spare on the line.

Abbeyfeale’s John Lenihan with Allaghaun River is another still in contention of capturing the €30,000 winners’ prize.

“The first round heats of the 2019 Irish St Leger produced the high quality track action that greyhound racing fans around Limerick and the rest of the country wait all year to see,” said Liam Kennedy, Racing Manager in Limerick Greyhound Stadium.

“It was great to see such a healthy crowd present here in Greenpark. We’re sure the second round will provide the same this weekend. I have no doubt the excitement will only increase as the climax of the competition draws ever closer on November 23. I want to wish the best of luck to all still involved,” said Kennedy.

This year’s Irish St Leger is sponsored by the ‘Friends of Limerick Greyhound Stadium’ group who have spearheaded a funding initiative which is proving very successful. This has enabled an increase in the top prize as well as new competitions of the Leger Cup and Leger Plate which will be ran on Leger final night.

Elsewhere, Limerick Stadium officials have confirmed that there will be three nights racing at the Dock Road venue this week – a Friday card added to the usual Thursday and Saturday racing.

Saturday’s card will have six round two heats in the 2019 Irish St Leger with 36 greyhounds going to traps.

This is the tenth running of the event in the Greenpark location, following the opening of Limerick Greyhound Stadium at the site in 2010. A total prize fund of €60,000 is on offer, with the winner to receive €30,000 plus a commemorative trophy – a 20% increase on last year’s winning prize.

The extra prize-money has enabled an increase in the top prize as well as new competitions of the Leger Cup and Leger Plate.