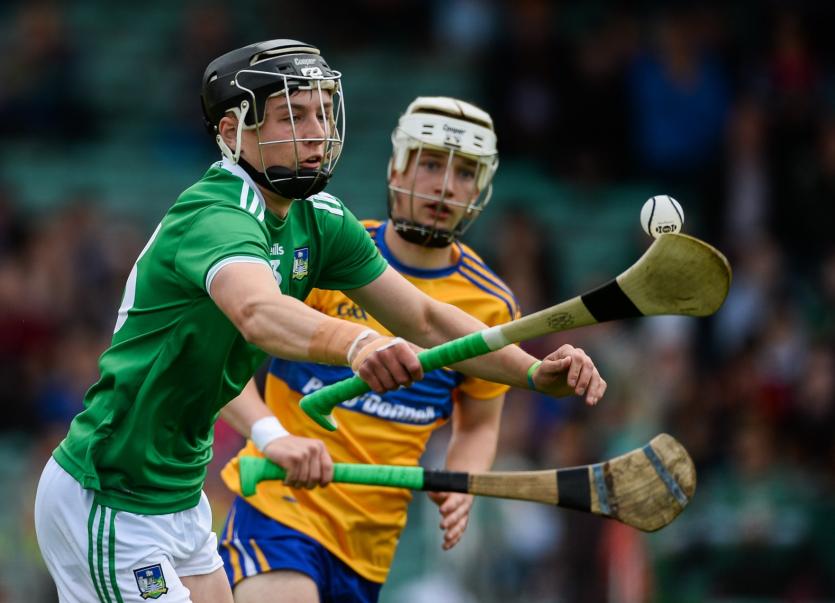 Limerick's Aidan O'Connor wins possession ahead of Oisin Clune, of Clare, during the Electric Ireland Munster minor hurling championship game at the Gaelic Grounds on Sunday

LIMERICK minor hurlers took a big step towards securing their place in this year's Electric Ireland Munster minor hurling championship final after securing a hard-earned 0-16 to 0-13 victory over Clare in their round robin fixture played at the LIT Gaelic Grounds on Sunday.

The victory for Limerick, on the back of two earlier draws, means that a win against Tipperary in their final round robin fixture at Semple Stadium on Sunday next, 12 noon, would see the Shannonsiders advance to the provincial final.

Two late points from a Cathal O'Neill free and Adam English in stoppage time helped Limerick close out a precious victory in the curtain raiser at the Gaelic Grounds.

Clare had rallied from five points behind with 10 minutes remaining to draw within a single point of their hosts as the clock ticked into five minutes of added time. However, those two late scores finally secured victory for the Diarmuid Mullins-managed home side.

Limerick secured two draws in their earlier round robin fixtures against Cork and most recently Waterford a week ago.

Limerick made two changes from the starting line-up which drew with Waterford seven days earlier for the visit of Clare to the LIT Gaelic Grounds.

Injured wing back Colin Coughlan was replaced by Cian Casey, who was a used substitute in the two opening round games.  In another change, Liam Lynch was preferred to Patrick O'Donovan in the Shannonsiders' line-up.

Limerick started the more brightly of the two sides, racing into a 0-3 to no score lead after six points. Patrick Reale opened the scoring for the home side inside the opening two minutes, while Aidan O'Connor and Adam English also fired over points from play. O'Connor's point was the pick of the scores as the Ballybrown attacker jinked superbly to shake off his marker before firing over from under the Mackey Stand.

Clare deployed captain Cian Calvin in a sweeper role in the opening half, the centre forward sitting in front of the visitors' full-back line.

Clare's Cormac Murphy opened the scoring for the visitors with an 11th minute point, before Cathal O'Neill responded inmkind for Limerick.

Hurling with the greater fluency, Limerick moved 0-6 to 0-2 ahead by the 18th minute, with O'Neill adding two further points, the second from play off a fine pass from the impressive Jimmy Quilty.

With Monaleen's Ronan Lyons and catain Michael Keane impressing in defence, Limerick appeared to have taken a grip on the game.

However, as happened in their two previous outings, the home side's performance level dipped, and Clare took advantage to draw within a point before half-time, 0-7 to 0-6, with the visitors tacking on the final three points of the half through a Keith Smyth, free, the lively Shane Meehan and Cormac Murphy.

Clare began the second half the better and Meehan's third point of the game from play drew the sides' level within 60 seconds of the restart.

Indeed. Clare were ahead for the first time in the game, 0-8 to 0-7, a minute later when Smyth fired over another free.

To their credit, Limerick rallied strongly and racked up three points without reply from Murrihy, his second of the game, and two pointed frees from O'Neill to make it 0-10 to 0-8.

The impressive Murrihy's third point from play of the day increased Limerick's lead to three points, before Meehan struck his fourth of the day from play for Clare to leave three points bewteen the side mid-way through the second half.

Two quick fire points from Liam Lynch and Patrick Kirby propelled Limerick into a useful five-point lead, 0-14 to 0-9. But any thoughts of a comfortable end to the game from a home perspective were dispelled as Clare rallied with a run of four unanswered points as the breeze at their backs picked up with the arrival of a rain shower.

That run of four points without reply brought the Bannermen back within a single point, 0-14 to 0-13. However, Limerick's resolve and composure came to the fore and those two late points sealed a priceless win.