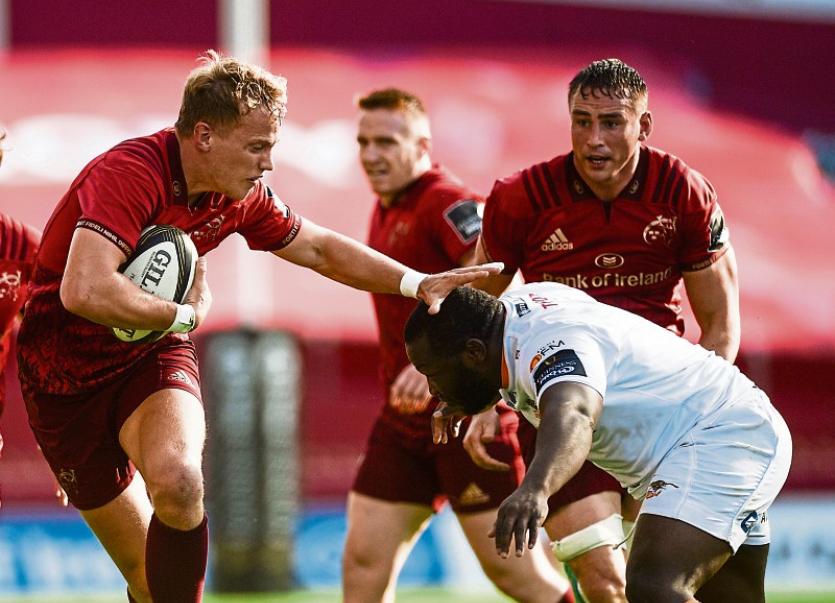 FULL-BACK Mike Haley says the opportunity to play for Ireland in the future was one of the factors he considered when opting to move to Munster during the summer.

Twenty four-year-old Haley from Preston in England is Irish-qualified through his Tralee-born grandmother Vivienne.

Munster signed Haley from Sale Sharks following news of full-back Simon Zebo’s departure to Racing 92. Haley insists that he would not be true to himself if he tried to copy Zebo’s style of play.

“The key thing is not to try too hard. You don’t want to be running from underneath your own sticks when it is not on. You need to have that decision making in your mind and when you are making those decisions, you need to make sure they are 100 per cent and you know what you are doing.

“Simon is a fantastic player and is brilliant for the club. But I am trying to do what I am doing now.”

Asked whether the opportunity to play for Ireland in the future was in his thoughts when choosing to move across the Irish sea, Haley said: “That’s definitely fair to say, but it’s something obviously I can't focus on right now, I have to focus on being in the team week to week, and then whatever happens, happens.

Haley has already spent time in an extended Ireland camp this season.

He said: “It was good, good fun. Obviously it was tough work and your first one, you want to make an impression. As far as I know I did that, but as I said, my main objective is to start for Munster and to do well for Munster, everything else takes care of itself.”

The Preston North End soccer fan said he has settled in well to his new life in Limerick and is looking forward to Saturday’s Champions Cup game with Gloucester at Thomond Park, 1pm.

Mike Haley said: “It’s been good, exciting from day one when I turned up, the boys have been very welcoming. We’ve had some great news, my girlfriend’s pregnant, due in February, so we’re going to see some houses. Very nice.

“Gloucester are playing great rugby at the moment, they have Danny Cipriani at ten, he’s firing very well for them, so it’s going to be a big task to stop them this weekend.”

Munster are sweating on the fitness of Irish winger Keith Earls ahead of Saturday’s clash.

Earls was a late cry-off for Munster’s draw in Exeter Chiefs last weekend due to a hamstring injury.

Earls, who had a scan on the injury this week, was replaced for Saturday’s game by Darren Sweetnam.