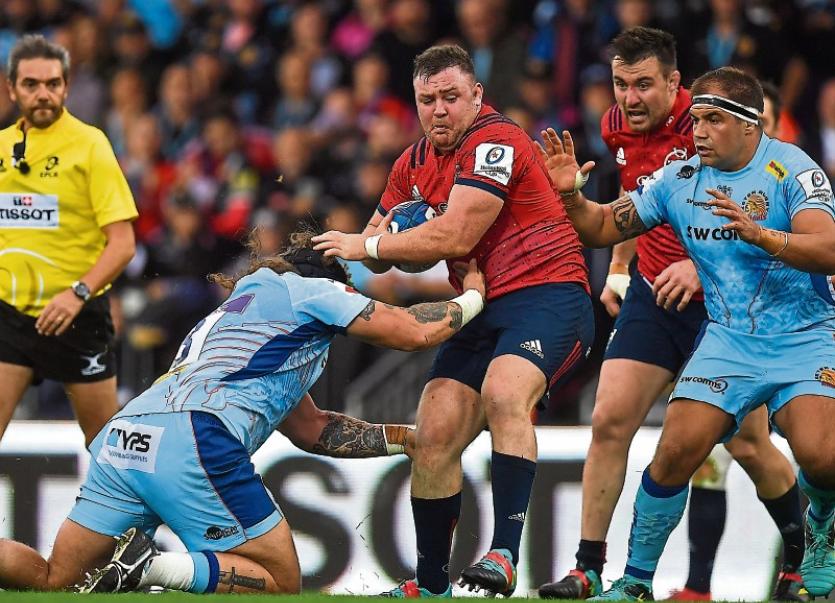 MUNSTER secured a nail-biting 10-10 draw with Exeter Chiefs in their Heineken Champions Cup pool opener at a windy Sandy Park on Saturday.

The game saw a European Champions Cup debut off the bench for scrum-half Neil Cronin, who was teaching at St Munchin’s College last season before joining the Munster set-up in the summer.

Cronin replaced Duncan Williams who turned in a fine display at scrum-half in the absence of the injured Conor Murray and Alby Mathewson.

Munster were forced into a late change to their starting line-up just before kick-off after winger Keith Earls pulled up in the warm-up and was replaced by Darren Sweetnam.

After playing into the strong wind in the opening half. Munster trailed their hosts 3-10.

Out-half Gareth Steenson kicked Exeter into a 19th minute lead with a penalty goal. Munster drew level on the half hour mark when Carbery landed a penalty in front of the goal.

Exeter took the lead in the 39th minute when their England hooker Luke Cowan-Dickie burrowed over from close range. Steenson’s conversion, after he was charged by Munster winger Andrew Conway, handed the home side their seven-point half-time lead.

Limerick centre, Dan Goggin made  his Champions Cup debut in midfield in the game.

Stander’s close range try, converted by Carbery, secured a share of the spoils for Munster.