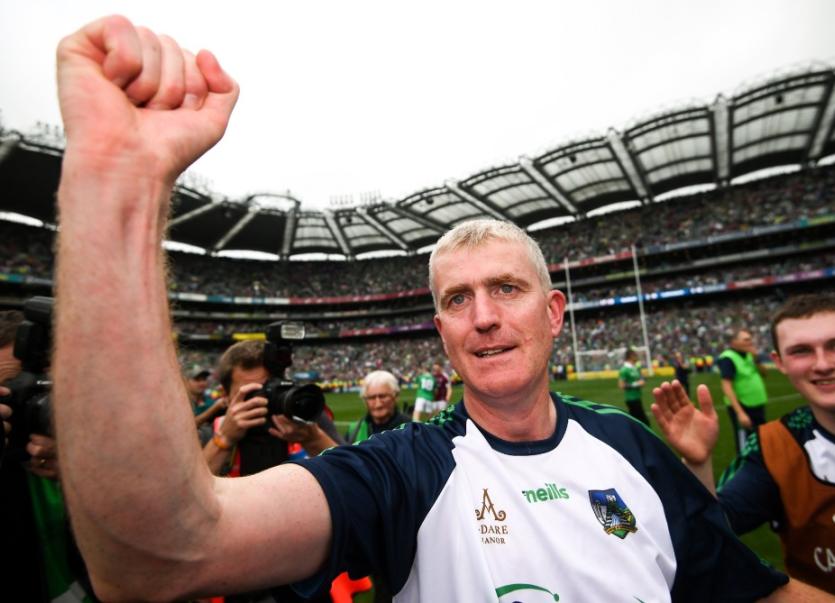 John Kiely salutes the crowd after the final whistle

“I'M just thrilled for the lads. I'm thrilled for all of Limerick. We felt over the last 45 years that we were second class citizens when it came to hurling. We were always the bridesmaids, but today we got over the line,” declared All Ireland winning manager John Kiely.

"We worked so hard and Galway pushed us all the way in the last 10 or 15 minutes and it was really difficult for the lads to hold their nerves and get those vital scores but they did. I'm just thrilled for the lads. I'm thrilled for all of Limerick.”

“We just wanted to get into the game, I didn’t want a big lead early doors because it becomes a weight on you. We saw with the eight point lead, it’s an incredible thing when the momentum shifts back to the opposition, it’s so difficult to stunt that momentum and reverse it,” explained the manager.

“We spoke about that all year, the need to respond at key moments when things go against you - Richie Hogan’s goal in Thurles, here against Cork when we were six down with eleven minutes left. Something had to happen. Sometimes when you have a big lead, when it starts to trickle it, the crowd senses the blood  – we had it ourselves against Cork, we smelt it, ye probably smelt it above. It was slipping a bit,” he said.

“It slipped a bit today but we just managed to squeeze enough of a response to hold our ground. “That key ball Tom (Morrissey) caught, the ball Graeme (Mulcahy) won and got a point from - we managed to win just enough balls and to get those shots off to deter Galway and to withstand that onslaught.”

The Galbally man did accepted the pain of the late tension.

”I’m not going to lie to you, I was a sub in 1996, on the panel in 1994, and I saw it happen in front of me. I’ve seen it happen in front of my eyes. You can’t block it out - you just acknowledge it and park it. Something else will happen to take your mind off it - someone will say something or you’ll notice something yourself and you’ll get distracted from that thought, as it were,” revealed the manager, who was a sub on the Tom Ryan teams of the 1990s.

Kiely was very aware of the history his side created.

“It’s just an awful pity it took so long. We had fantastic teams in the eighties, 1980, 1981, 1994, 1996, 2007. Those groups would have fancied themselves other years but you had the knock-out situation. They were great teams, great players, but various bits and pieces didn’t go for them. It’s a pity it took so long,” explained John Kiely.