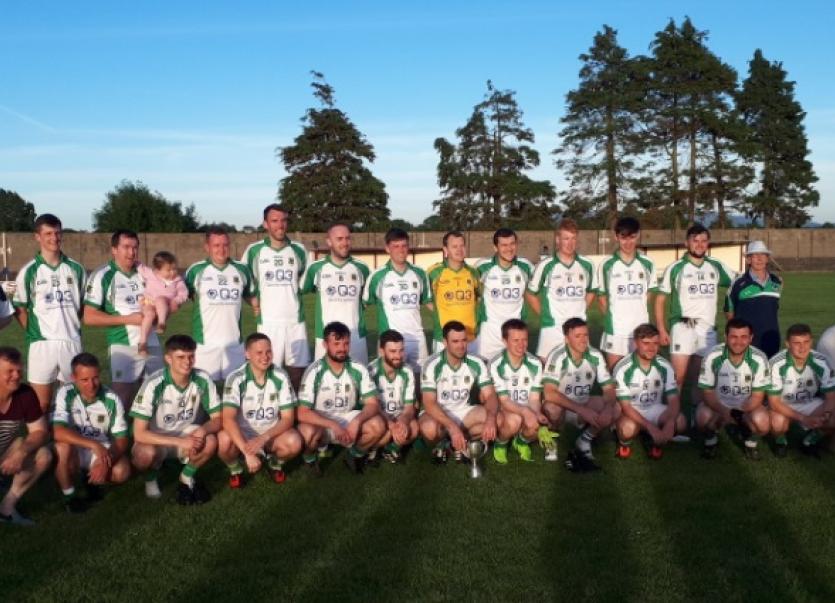 Ballybrown continued their rise up the football ladder with a 4-11 to 0-14 final win over Hospital-Herbertstown to lift the junior A title.

Eleven months ago, Ballybrown won the Junior B league title – before going on to enjoy championship success at divisional, county and provincial level in a remarkable season and the Mike Mann managed side have added city and county junior A titles to the haul in 2018 already.

Three goals in the opening 18 minutes got the city champions off to a flyer.

Killian Cliffe opened the scoring with a three-pointer in the third minute before raising his second green flag after nine minutes.

Limerick U-21 hurler Josh Adams got his side’s third goal punching in after Killian Gavin’s effort dropped short. However, Hospital scored six of the next seven points but trailed 3-5 to 0-6 at the interval.

Despite a game effort from Hospital, the winners added a fourth goal with Andrew Cliffe’s effort as the game approached its last 10 minutes in Bruff.

In Ballingarry the junior B crown was secured by the men from Foynes-Shanagolden with a 1-12 to 1-9 win over St Patricks.

The victory was secured despite a red card for St Senans after just a minute.

A Darran Kavanagh goal from a penalty in the 43rd minute moved the men in blue and gold 1-9 to 0-7 clear.

Kavanagh was to end with 1-4 for the winners, while Padraig Reale was top scorer for St Patricks.

Jack Doyle hit back with a goal for the city side in the 53rd minute to leave it 1-9 to 1-7 but there was no denying St Senans who had sub Kieran Kavanagh among their insurance scores.

The Junior A hurling league final - Adare v Patrickswell, was also on the fixture list for this Sunday evening. Although, the referee and members of the public were in Croom for the 7.30 start it appears the game was called off earlier on Sunday and only time will tell if it will be refixed or Patrickswell deemed champions as it appears Adare were not fulfilling the fixture.

*See the print editions of the Limerick Leader newspaper for full match reports on both junior football league finals.