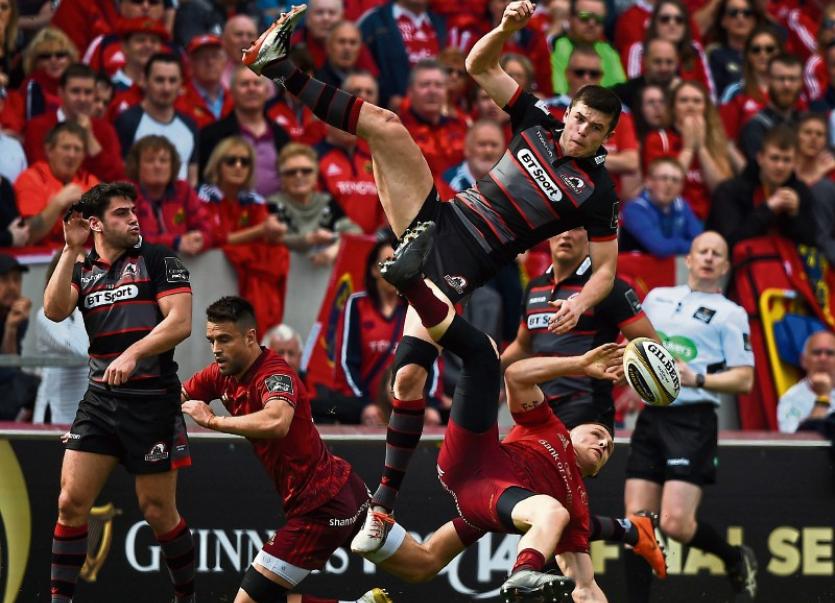 MUNSTER played their final home fixture of the season on Saturday at Thomond Park where the official attendance was given at just 10,205.

Knock-out rugby on the May Bank Holiday weekend in bright sunshine.

The official attendance at Parc y Scarlets for their semi-final play-off with the Toyota Cheetahs also on Saturday was 7,105.

But attendances at Munster’s home fixtures are traditionally higher than the Scarlets.

So why was Thomond Park less than half full for the province’s final make-or-break home game of the season?

It’s worth casting an eye back 12 months.

For Munster’s glamour Champions Cup semi-final with Saracens at the Aviva Stadium, thousands of Munster fans endured lengthy traffic tailbacks on their way to Dublin.

A series of accidents on the route caused frustrating delays for the fans making their way to Dublin. Some even missed the start of the game at Lansdowne Road despite leaving in ample time from Limerick.

Munster were second best against ‘Sarries’ that day and the dream of winning a third European Cup – and first in 9 years –died.

Defeat in Europe sucks the life out of the rugby season for a good chunk of Munster’s support – no doubt about it.

A few short weeks later, Munster were back in Dublin for a Guinness Pro 14 final showdown with the Scarlets.

The game offered Munster the opportunity to win silverware for the first time in six long seasons. The match venue amounted to home country advantage for Munster.

But this time there were no tailbacks on the M7 between Limerick and Dublin, no lengthy delays.

Munster did enjoy the lions share of support inside the ground as you would expect, but it was clear that a significant chunk of that support was Dublin-based, Munster fans exiled in the capital.

The Munster-based, Munster support didn’t turn out in the same numbers for the Scarlets final as they had done for the Saracens semi-final.

The situation highlights Munster fans' love-affair with Europe – a face borne out  when an estimated 6,000 Munster fans travelled to Bordeaux in the South West of France for the recent Champions Cup semi-final with Racing 92.

To be fair, sunny Bordeaux is a very attractive match destination at the end of April.

That brings us back to last Saturday and the turn-out for the visit of Edinburgh to Thomond Park.

So why was the ground less than half full? Discussions on social media over the weekend offered a number of possible explanations.

The fact the game was played on a Bank Holiday Saturday which coincided with the welcome arrival of the sun after one of the longest winters in recent memory was one reason.

Another was the fact the game coincided with the height of the First Holy Communion and Confirmation season, an expensive time of the year for families.

It must also be remembered that a decent portion of the workforce work on Saturday afternoons, Ed Sheeran was playing three concerts at Pairc Ui Chaoimh, which would also have hit attendance, the popular Kinsale 7’s tournament was also taking place, while the club GAA season is in full swing.

So how many Munster fans in the RDS Saturday week? Only time will tell on that front.