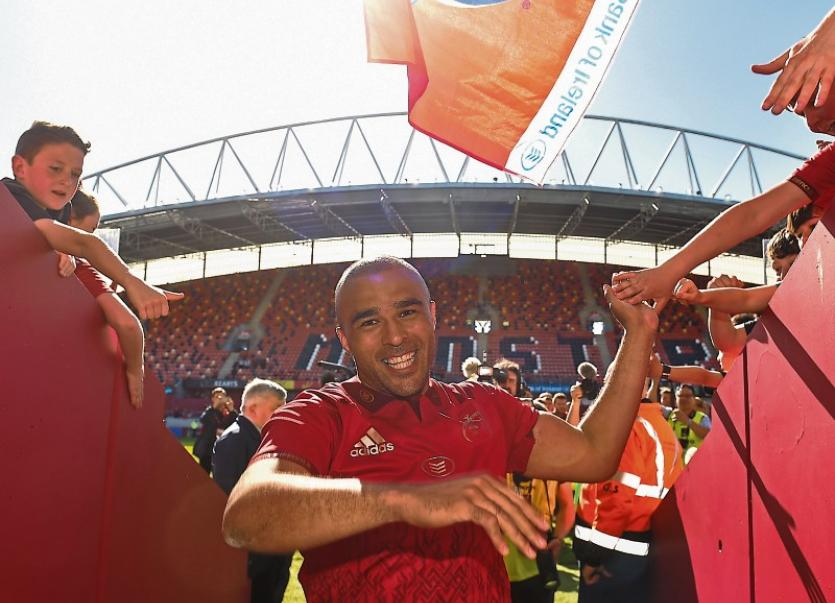 DEPARTING Munster full-back Simon Zebo is not ruling out a return to the province at some stage in the future.

Speaking in the wake of Saturday’s win, Zebo said he found it hard to describe how much he would miss playing for Munster.

Zebo told Sky Sports: “I couldn’t do it justice by saying how much I’ll actually miss it, but (returning to Munster), that’s definitely never going to be written off.

“Growing up as a Munster man, to get the opportunity to represent your home province, there’s nothing like it.

“Obviously, I have been very lucky and blessed to be able to do it for the length of time I did, but hopefully, it’s not the end.”

Zebo waved good bye to the Munster supporters on the Thomond Park pitch at full-time on Saturday, accompanied by his young son and daughter.

“It was great to bring the kids out onto the pitch and see my daughter and son waving at the crowd, I know they don’t know what’s going on now, but in years to come I’ll be able to tell them a little bit of a story about my time here at Munster, so I was very proud.

“I think it was one of those games where it was on a knife-edge at times and we had to really had to battle and dig deep to get the win. These are almost games you’d prefer as opposed to winning games by 30 or 40 points, because it shows so much character.

“I’ll remember that win definitely, but hopefully we have two more wins to go.

“There’s a lot of old, wise heads on the team like Pete (O’Mahony) and Billy (Holland), Earlsie and Conor (Murray). They have been through the mill and how how to close out these tight games, so I think it was essential to have that experience on the pitch.”

Zebo agrees that Munster face a difficult task on Saturday, May 19 when Leinster provide the opposition for their glamour Guinness PRO14 semi-final at the RDS Arena, 3.15pm.

Zebo said: “Conor (Murray) and I had a little chat out on the pitch, just saying how much we did need to improve if we were to beat Leinster and these guys.

“Yeah, we’ve a massive step up, but crucially we’ve got another two weeks.”

Zebo said Munster’s attack would need to improve significantly if they are to beat Champions Cup finalists Leinster in their upcoming semi-final.

“Our attack needs to improve a bit if we want to take down the Leinsters of this world. I can’t wait.

“It will be very difficult, they’ve been incredibly impressive this year.

"They’re like an international side. There’s no weaknesses in their team, but the whole factor of a Munster-Leinster semi-final, I think attack is probably going to win this game, I don’t think any defence is going to give up any inch, so I think we’ll have to improve our attack and hopefully score a few tries.

“It is going to be a hell of a battle.

“Hopefully Racing do a job on them and make them a bit sore for the week after!”