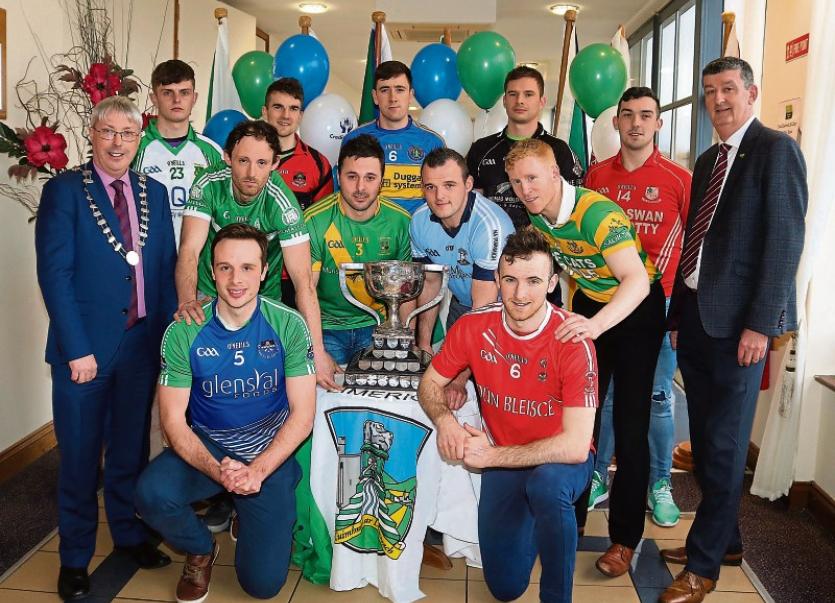 Pictured at the launch of the Credit Union Limerick SHC

THERE’S a new-look to the Credit Union Limerick SHC as the 2018 championship throws-in this weekend.

In total 10 different clubs have won successive championship titles – Adare were the last to do so, 2007-09.

Since, their All Ireland replay loss, Na Piarsaigh have been busy – they have had two rounds of action in the Limerick SFC and eventually lost out to Doon after a replay in the Premier U-21 hurling semi final. That loss ended their bid for 7-in-a-row of U-21 championship wins.

Peter Casey’s missed those U-21 games though injury and remains a doubt for Sunday’s Limerick SHC round one tie when their opponents are once again Doon! This repeat of last year’s semi final takes place in the Gaelic Grounds and will be live on TG4 at 2.00.

Along with Peter Casey, there is also uncertainty surrounding David Breen, who continues to be based in the UK for work.

Doon will hope to have Darragh O’Donovan back from an injury lay-off while Niall Maher and Cathal McNamara are back after missing much of last season. Tommy Hayes though is abroad in college.

Elsewhere in the Credit Union Limerick SHC there are two games live on eir Sport on Saturday from the Gaelic Grounds – 2014 champions Kilmallock play Ballybrown at 3.00 and 2016 champions Patrickswell play Adare at 4.45.

Both Kilmallock and Ballybrown could have players absent due to college/work commitments – Rob Hanley and Mikey Kiely. The Clarina side have also seen Des Kenny retire in recent months.

Patrickswell also have a retirement – Barry Foley, veteran of seven title wins. Thomas O’Brien is expected to be available, although working abroad at present.

The first of the six round one games is this Friday (6.45) when Monaleen play Knockainey in Caherconlish.

Monaleen veteran Brian Geary is yet to return this season while it’s a similar situation for Knockainey duo Ger O’Sea and Mark Cleary.

Ahane will be without the injured Paddy Morrissey, while vastly experienced duo Ollie Moran and David Laing have been in action for the club’s junior side recently.

The final game in the top flight is Sunday (6.00) when South Liberties play newly promoted Murroe-Boher in Cappamore.

Shane O’Neill returns for Liberties after missing 2017 due to a cruciate ligament injury. Newly promoted Murroe-Boher will have a new goalkeeper with the long serving Willie Tobin not returning.

Round two takes place on April 27-29 ahead of the Munster SHC.