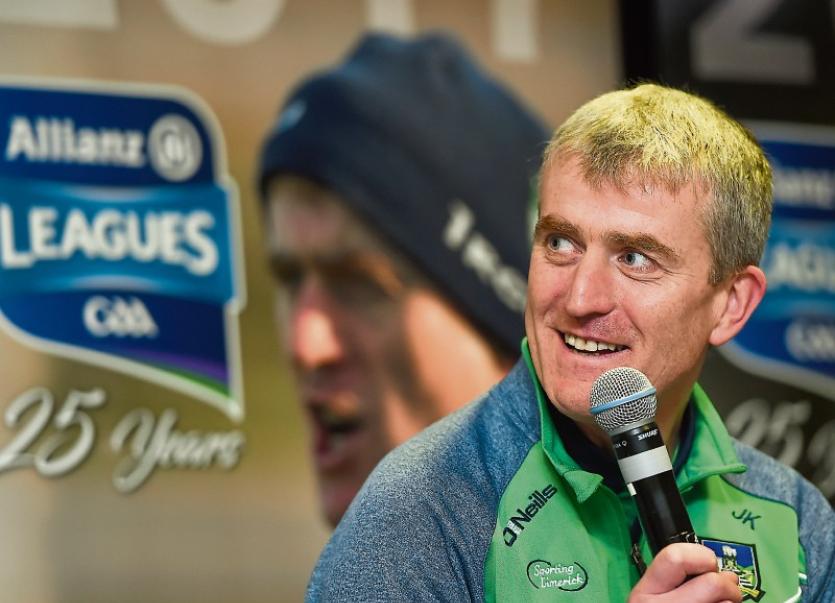 JOHN Kiely and his Limerick senior hurling captain Declan Hannon were in sync this week when previewing the Allianz Hurling League.

“We want to build on the performances of the Munster Hurling League – the most pleasing thing about the final with Clare was the performance, rather than the result,” said Limerick manager John Kiely.

Captain Hannon echoed his words: “Without a top performance there is no positive result. It’s about sticking to the plan from training”.

It’s year eight in the second tier of the hurling league for Limerick and 2018 brings Laois and Dublin to the Gaelic Grounds, with trips to Offaly, Antrim and Galway.

John Kiely and his management team have 43 players on their books at present – albeit 10 Na Piarsaigh players are club tied – and just six have played in Division One league hurling; Seamus Hickey, Paul Browne, Richie McCarthy, Tom Condon, Graeme Mulcahy and Nickie Quaid.

“Everyone would of course love to get out of this division and that’s what we are aiming for. It would be lovely to be going to Thurles or Nowlan Park for games but this division is a lot more competitive than it might seem and it does give us a bit more of a chance to see new players,” said Hannon.

”Morale and confidence is good after the Munster Hurling League and we want to continue that. It’s always more enjoyable when you are winning or come through a tight game – it builds confidence,” he said of the unbeaten start to 2018.

A hamstring injury forced the new captain to miss the Munster League final win over Clare and watching on from the Mackey Stand he saw positives aplenty.

”There was a real pattern to the play.”

Hannon is ruled out of Sunday’s opener against Laois – Gaelic Grounds on Sunday (2.00).

The centre back is one of five players that are receiving treatment at present.

Hannon missed the Munster Hurling League final win over Clare with a hamstring injury and it now looks likely he could miss the opening two back-to-back league games against Laois and Offaly.

Also likely to miss both is All Ireland U-21 winning centre back Kyle Hayes – he missed all three games in the Munster League and didn’t feature for UL in the Fitzgibbon Cup last Sunday.

Graeme Mulcahy is another yet to see action this year and will most likely miss the visit of Laois to the Gaelic Grounds.

Another injury doubt is Barry Nash, who also missed UL's game, while William O’Meara didn’t play for LIT in their Fitzgibbon Cup game.

Limerick will also be without their 10 strong Na Piarsaigh contingent ahead of their All Ireland club SHC semi final on February 10.

For manager John Kiely, there is only one target.

”The target is to take it game by game and to build on the performances of the Munster Hurling League.”

He explained: “Division 1B is deceptively competitive and we have learned that it is dangerous to look too far ahead. Who would have predicted that Wexford would have Limerick and Galway wins in the first two rounds last year and have promotion all but wrapped up”.

“We will look at the league as a block. There are four real blocks to the year – pre-season including the Munster League, the Allianz Hurling League, the round-robin of the Munster SHC and the All Ireland series,” outlined Kiely.

“We need to incrementally build from block to block and that starts with continuing the confidence we have got from winning games in the Munster League. The thing about Division 1B is that is actually quite short and there are five games over six weeks.”

Limerick are to name a team on Friday night but have players involved with Fitzgibbon Cup games this Wednesday and Thursday. Limerick and Laois have met in six of the last seven league campaigns – all six Limerick wins. In each of the last two years Limerick have scored six goals.