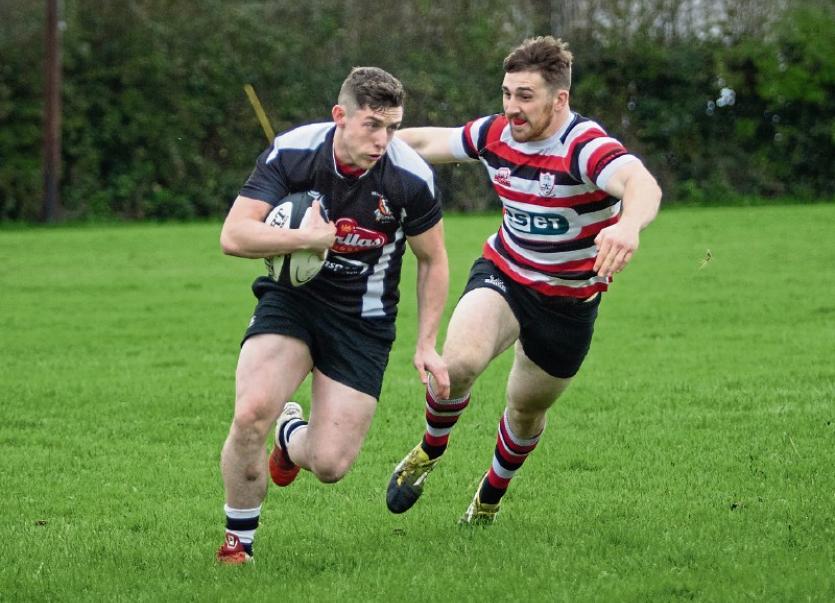 Darragh Treacy, Newcastle West, makes a break from David O'Dwyer, Enniscorthy, during their sides clash in the All Ireland Junior Cup in Newcastle West

IN what must be one of their bigger challenges of recent seasons, Newcastle West make the long trek to Enniskillen for Saturday's quarter-final of the All-Ireland Junior Cup.

It is their second time reaching this stage of the competition, losing at home to Instonians two seasons ago. They plan to travel on Friday and overnight in Cootehill.

Their home win in the earlier round over Enniscorthy raised a few eyebrows and with their GAA players back in harness, they will be expected to put up a battling display at this next hurdle.

Club spokesman Ger Normoyle is optimistic: "Without our GAA lads we had a poor start to the season but we will be close to full-strength for this game.

“We have a young panel, eight of them are under 21, but we also have the experienced players like Stephen Kelly and Sean Herlihy who can pull us through. I'd say our chances are 50/50."

Tipperary side Clonmel are also on the road this Saturday with a visit to Ashbourne Sunday’s Munster Junior League games reaped some high scoring and with all five Limerick junior clubs in action, there was joy for three and disappointment for the other two.

In the MJL1 Newcastle West ran up a sizeable scoreline in their away win against Cobh Pirates while Abbeyfeale came from behind to beat Galbally.

The other game involving a Limerick side in this league finished with Richmond just getting the better of visitors Waterpark while in MJL2, St Mary’s failed to take any points from their visit to Castleisland. Here are the details:

THE ‘West’ ran riot in the

second half of this game played in The Paddock.

They led 3-24 at half time thanks to tries by former Shannon man Stephen Kelly, Brian O’Doherty and Donal O’Sullivan and three conversions and a penalty from the boot of the ever-reliable Sean Herlihy.

THE first half of this derby game was very close with Galbally showing their best form of late.

They led 14-6 well into the second half but Abbeyfeale summoned up their traditional fighting spirit and two second half tries swung the tie in their favour and they held on to get their fourth league win of the season.

Scorers for Abbeyfeale were Michael Roche who got two tries, a try by Derry O’Connor who also kicked two penalties while Stevie Daly landed a conversion.

THE final score looks closer than the overall play in this highly entertaining game, played at a well-attended Richmond Park, the Waterford visitors getting a late converted try, but Richmond had still to work hard for victory.

Tadhg Bennett kicked the home side into the lead early in the first half but Waterpark silenced the home fans when they replied with an unconverted try that saw them lead 3-5.

A second Tadhg Bennett penalty put Richmond ahead by a single point but the out-half and coach converted a try before the break from Keelan McMahon to put the homesters 13-5 to the good at the short whistle.

The second half was hard-fought but it was Richmond who got the nextscore on 45 minutes, Dean O’Halloran getting over and Tadhg Bennett converting to increase the lead to 20-5.

This score seemed to spark more life into Waterpark and their converted try got them back into this game at 20-12.

Richmond’s defensive qualities were tested for a period after that and another Tadhg Bennett penalty made it 23-12 going into the final minutes.

Waterpark’s late seven pointer was fully justified for the effort they put in and the losing bonus point was their only consolation from this visit to Limerick.

The ‘Saints’ were fancied to win this game played in Crageens but they came up short with the Kerry side deserving of their victory.

St Mary’s missed a late penalty that could have given them a losing bonus point and they could well regret this stumble on the road to promotion.

Castleisland led 8-6 at half time, Sean Lyons kicking two penalties for St Mary’s but a second half try for the home side proved crucial to the result.

According to Christy McNamara of St Mary’s, his side travelled with only 19 players and finished the game with a prop filling in for the injured hooker.

Their next game in this league is away to Ballincollig, another fixture that could test their title winning potential.

THE Gleeson League is providing plenty of action for thirds and seconds teams.

Unbeaten St Mary’s and Garryowen are joint leaders of the A section after four games with Shannon, Richmond and Scariff in the chasing group with three victories.

Old Crescent, Newport and Presentation have recorded two victories with UL Bohemian in ninth position with just one victory.

Here are the results from last week-end:

This was a fine performance by Pres, running in six tries and holding the visitors to Rathuard scoreless.

On the scoresheet for Presentation were Ken Greaney who scored a brace of tries and there was one try each from Daniel Coll, James Ryan, Peter Moloney and Ian Moloney. Alan Daly was in good kicking form, converting three of the tries.

This was a highly entertaining game and there was only two points between the sides at the final whistle.

Bohs took the lead coming up to the 20 minute mark when Ronan Likely kicked a penalty that saw the Red Robins lead 3-0 at the short whistle. 20 minutes into the second half, Scariff went ahead when they scored a try to go 5-3 in front.

On the stroke of full-time UL Bohemian got a try from Tomassico O’Connor and it looked as if the visitors would hold out for an 8-5 victory. It was not to be, Scariff getting over for the match-winning score deep into injury time.

outfit on this occasion.

This local derby lived up to expectations with the Grove Island boys getting the better of the battle after a hectic 80 minutes.

Ger McInerney proved to be the Saints’ hero, scoring a try and two penalties while Richmond had their scores from a Brian O’Neill penalty and a drop goal by Niall Benson.

The newly amalgamated outfit has struggled in this league but they will benefit from the experience. Newport’s victory sees them move to seventh place.

THE 'Light Blues' thirds are in great form this season and came away with victory at Rosbrien that keeps their bid for the title very much alive.

Tries from John Brennan, Peter Neal, Sam O’Rourke and Dave Griffin kept the Dooradoyle side well clear of the opposition with the experienced kicker Kevin McEvoy adding three conversions and a penalty.

BRUFF received a walk-over from Nenagh who failed to travel to Kilballyowen.

Another big score for the Shannon seconds, running in six tries in their victory over their local rivals UL-Bohemian..

On the scoresheet for the Parish side were Evan Sargeant, Darren Gavin, Adam Moloney, Mike O'Gorman, Aaron Hehir, Elliott Fitzgerald a try each with Jerry McCabe and Richie Mullane kicking a conversion each.