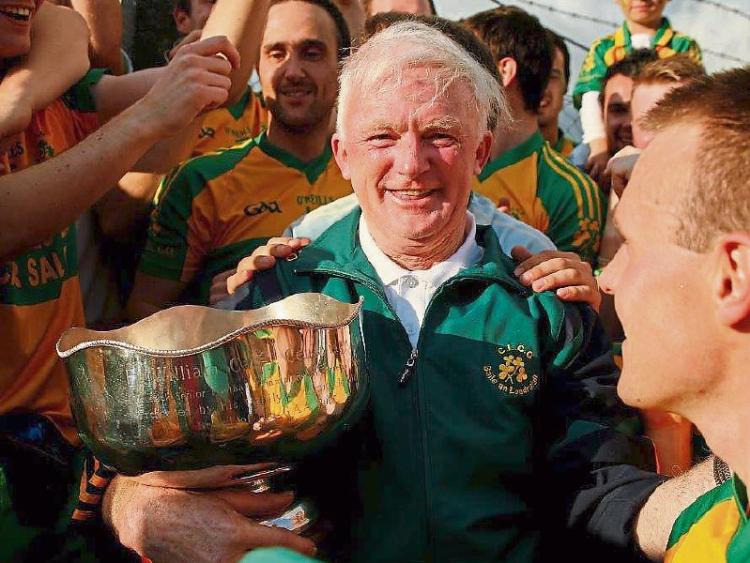 FROM the moment you turned the bend at Connery’s farm you could feel the stillness of the town.

This rural South Limerick town was in mourning. It’s normal business was on hold as people from all over Limerick travelled to pay their respects to a great GAA man.

The death of Bill Fox sent a sadness around Ballylanders, Glenroe and beyond.

He was, to them, one in a million, a man that had massive pride in his club and community. A man that took huge fulfilment from seeing his club and parish doing well. It takes a special person to command the respect of the young and old and Bill Fox managed that. He was welcome at every door and he rarely came empty handed.

Around Christmas he would come with selection boxes for the young and a box of biscuits for the house. It was fitting that he was laid out in the GAA complex and in a room that was called after him.

As you approached the complex you got the smell of freshly cut grass, the verge on the right was cut, tidy and clean just as Bill would have wanted. He had a name for doing things well on his farm, his yard was as clean as a kitchen floor. As he would say himself, “If it’s worth doing it’s worth doing it well.”

Bill Fox and his family were steeped in the GAA. They didn’t take it lightly and when Ballylanders were playing the rest of life’s challenges took second place. Rural Ireland is now seeing huge change. Finding people to volunteer is becoming next to impossible and sadly the trend will be more difficult in the future.

In the case of Bill Fox you could safely say he was unique. Bill was born with challenges but he never allowed it become an excuse for not playing his part. In fact he led the way in many aspects of his life, he was without doubt a role model for anyone faced with the same or other challenges. The GAA was his outlet in life and he gave a great deal more to it than he got. His challenges didn’t allow him be a player but he became a central figure in the development of his club. Pure and simple Bill Fox led without most people knowing it and that’s always the sign of a great leader.

As well as playing his part for his club he played an even bigger part for Limerick GAA. He was the biggest coordinator of what was firstly the Mackey Stand Draw and more recently the Limerick GAA development draw. For thirty one years Bill Fox had a work ethic that will never be equalled.

In that time he would have easily collected €750,000. The fact that one man could do that much fundraising for so long is quite unbelievable. No one was safe when Bill knocked on the door. He asked for support and people were happy to support Bill. He had a way of making you feel good about it.

Mike Meade the referee and current Secretary of the Ballylanders club knew Bill Fox all his life, he went to games with him and when he started refereeing Bill was one of his trusted lieutenants at the post. He knew of Bill Fox’s importance to the club and parish, “It would be just impossible to put a value on the work Bill did for our club. He set a standard that will never be equalled. He was so passionate about the club and he was so well respected by everyone. From time to time players might fall out with managers and lads would have retired early and so on. When that would happen Bill was always on hand to sort it out. There are lads in Ballylanders today that wouldn't have a county medal were it not for the help of Bill Fox.”

When Ballylanders were on top Bill was a very happy man. He loved his club and everyone of the players meant a great deal. Around 2011 John O’Dwyer was coaching Ballylanders. He decided to bring Paul Galvin to chat with the players at the hotel in Mitchlestown. Bill was thrilled to meet Galvin. He had barely landed when Bill took the opportunity to tell him how good the team were. He advised him that they had a player as good as Colm Cooper. Before Galvin could ask his name Bill said, “Wait until you meet Danny Frewen. He’s a class young lad that will go on to be a great player.”

For the entire time Bill didn’t leave the side of Paul Galvin. He struggled to eat a chicken sandwich and keep up with the questions from Bill.

As an umpire Bill got to see the county and country with Mike Meade. He was solid and lads shouting into him carried little weight. He had the nerve for the job and was always cool. Some years ago Meade was referring a game in Askeaton. The same evening Tipperary and Waterford were playing in the first of the Munster championship games on a Saturday evening.

The game in Askeaton was a dull affair, to make matters worse it was pelting rain, Mike Meade picks up the story, “It was a bad game to say the least, scores were few and when I looked at my book I noticed three points to two. I was concerned that I had missed some scores. Bill would always have a pencil and paper for scores. When the play was close to him I ran into Bill and said what’s the score, he replied, nine points to seven in favour of Tipp.” Meade could only laugh as he noticed the earphones under the cap.

One of the many people that paid their respects to Bill was JJ Kennelly.

The famous jewellery shop owner from Limerick City. He knew him for years, “I think Bill brought more cups for the South Board than anyone. From medals to cups he would call to me and we would give a long time chatting about GAA. His club was so special to him and he never lost an opportunity to promote it.”

In the weeks before his death Bill suffered a great deal with pain. When people would call to see him he managed to find a smile. When they would ask how he was he quickly replied, “I'm fine.” The simple things in life gave Bill Fox great pleasure.

As he left his home in Ballintubber each morning his eyes would catch the Galtee mountains. He was a deeply religious man that visited the grave yard every morning to pray at his mothers grave, he would then stroll to pray for Anne Hickey and his lifelong friend Seamus “Sham” Murphy.

Over the years Ballylanders GAA has lost some great people much too early in life. Ann Hickey was an outstanding administrator, her son Brendan at just nineteen, Noel Martin was also a great club man that founded the ladies club and four years ago Seamus Murphy passed away.

Bill Fox touched the hearts of so many in his community, players that had shown some steel to win championships were broken hearted and weren't afraid to express it.

The guard of honour lined the street of Ballylanders, all businesses closed their doors, they clapped as a mark of respect to a man that had infected them with the love he had for his native place.

Bill is gone, but for as long as football is played in Ballylanders, generations of young people will be reminded of the legacy of Bill Fox. To his family, club and friends I offer my sincere sympathy.