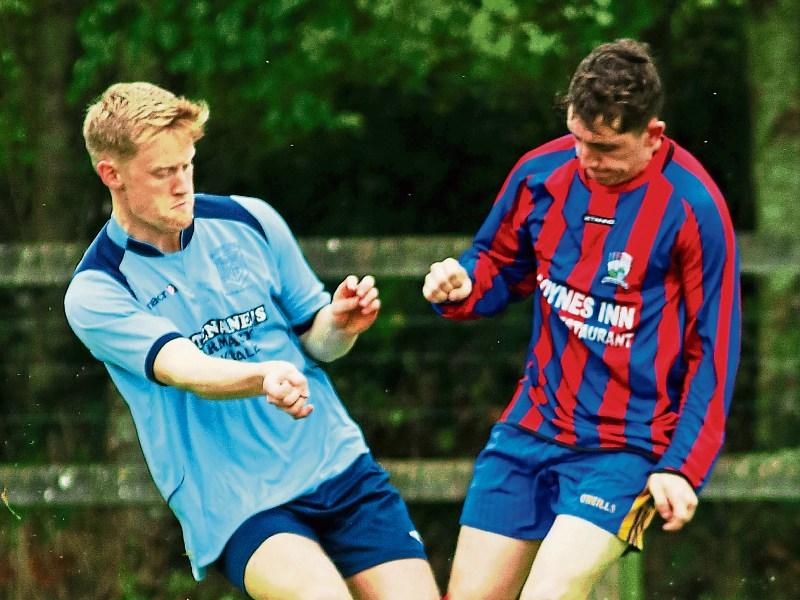 Premier Division Champions, Rathkeale, got the defence of their title off to a good start with a 4-1 victory away to Shannonside, runners-up in Division 1 last season.

Declan Nash, who scored 34 goals last season, showed that he hasn’t lost his scoring touch by netting a hat-trick, with the other goal scored by Shane Doherty. Darren Lawlor scored the Shannonside goal in the 89th minute.

Granagh United made a winning return to the top flight after a 12-year absence by recording a 1-0 victory away to Athea United. Pa O’Donoghue had a goal disallowed for offside in the first-half but there was no doubt about the validity of Stephen O’Brien’s headed goal in the 55th minute. Dan Pearson came out of retirement to play in goals for Granagh.

Carrig Celtic, under the management of John Moynihan and Paul O’Connor, came from behind to win 2-1 away to Glin Rovers, whose opener was scored by Ger Riordan. The two Carrig goals came inside a minute, just before half-time, scored by Sean McSweeney and Killian Enright.

Broadford United may be unhappy at having to settle for a 1-1 draw at home to Newcastle West Rovers, especially as Rovers only had 10 players for the first 25 minutes. Broadford opened the scoring in the 44th minute when Sean Brosnan, Paul Madigan, Willie O’Brien and James O’Brien combined to set up Alan Fitzpatrick for a curled finish. The Rovers equaliser came in the 83rd minute when Ian Corbett headed home a Shane Stack cross.

The Abbeyfeale United v Ballingarry game has been switched to Wednesday at 7.45.

Killeaney will be hoping to continue their knack of bouncing back to the top flight at the first attempt and they got off to a promising start in that regard by coming from behind at half-time to win 3-1 away to Feenagh, whose goal was scored by Diarmuid Coleman. The Killeaney players to hit the target were Mike Hayes, Sean O’Connor and Colin Enright.

Abbeyfeale United B also came from behind to win 3-2 away to Adare United. Daniel Lyons opened the scoring for the Fealesiders from the penalty spot in the 4th minute and Jack English equalised a few minutes later. Adare went in front when Chris McAteer converted from the penalty spot. TJ Lane brought the sides level in the 40th minute and he went on to score the winner in the 83rd minute.

Kildimo United continued the sequence of away wins by recording a 5-2 victory away to Ballysteen, whose goals were scored by Patrick Moore and Sean Whelan. Dara Deegan scored four and the other Kildimo scorer was Mike Uwatse.

Glantine and Newcastle West shared the spoils in a 2-2 draw. Brian Sheehan and Pa Delee scored for Glantine, while Newcastle West’s goals came in the form of an own goal and an Aaron Geary free-kick.

The most impressive result in Division 2 was recorded by Pallaskenry, who won 4-0 at home to Glin Rovers B. They led 2-0 at half-time through Ryan Kelly and Kevin Madden, while Darren Walsh and Lorcan Fitzgerald scored the second-half goals.

Newcastle West Rovers B were 4-0 up at home to Askeaton at one stage but were forced to hang on after the visitors pulled three goals back. The commanding Rovers lead was provided by Brian Crowley (2), Damien Keenan and Andrew Nix, while Jeff Duggan, Conor Pledge and Peter Harty scored the goals in Askeaton’s gallant comeback attempt.

Shountrade and Rathkeale B are among the favourites for promotion and they both recorded 2-1 victories. Adam Riedy scored twice for Shountrade away to Bally Rovers, for whom Conor O’Shaughnessy pulled a goal back before half-time, having earlier missed a penalty. The Rathkeale B scorers at home to Knockaderry were Tony McCarthy and Eoin Kelly.

A goal each earned a point each for Ferry Rangers and St. Ita’s. After a scoreless first-half, Gary Allen opened the scoring for Ferry with a fabulous strike from 30 yards that flew in off the underside of the crossbar and Chris Wren equalised in the 55th minute.

The award for the top scorers of the day goes to Creeves Celtic who won 8-4 at home to Broadford United B. Seamus Mangan led the way with five goals and he was joined on the scoresheet by Tom Shanahan (2) and Richard Hayes. The most spectacular goal of the game was scored from the Broadford pass-off after Creeves’ second goal. The ball was passed back from the centre spot to Micheal Begley who was 15 yards inside his own half when he struck the ball first time and so it was to the astonishment of all present that his magnificent strike flew all the way to the back of the net, with no less a judge than Broadford A manager, Jim Neenan, rating it as the best goal he has ever seen.

Not far behind Creeves in the scoring charts were Glantine B, who won 7-2 at home to Athea United B. It was hard to envisage such a one-sided result at half-time, when the sides were level at 2-2, with Brian Sheehy and Peter O’Connor scoring for Athea. For Glantine, Timmy Foley netted a hat-trick, Jesse Dore bagged a brace, Alan Doody converted a penalty and Patrick Flaherty also got on the scoresheet.

By contrast, goals were noticeable by their absence in the game between Ballingarry B and Carrig Celtic B, which finished scoreless.

Contrary to what I stated last week, the teams in Division 3 will play each other three times.