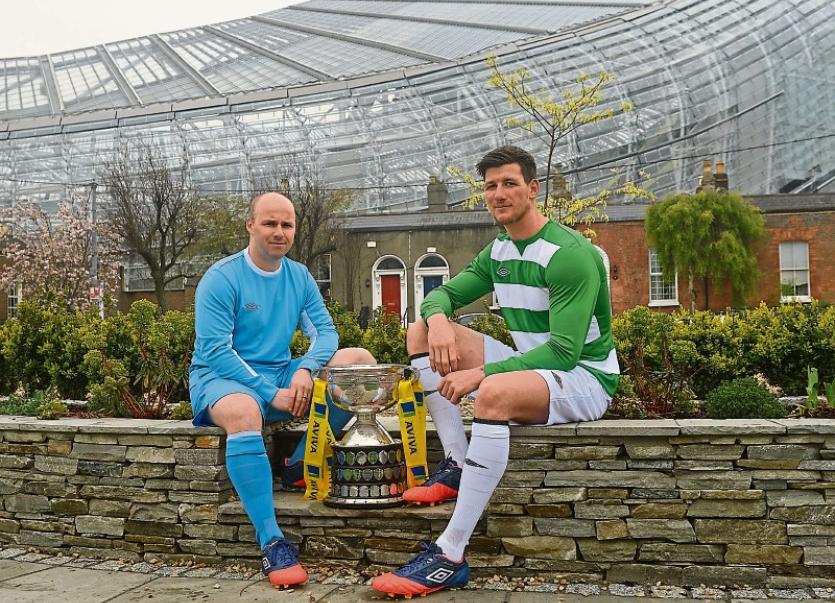 Gary Neville
The most consistent goalkeeper in Limerick over the last number of season. Holder of an FAI medal from Pike’s last win in 2011. A vital cog in the side with 15 clean sheets to his credit already this season.

Wayne O’Donovan
A Premier League winner with Janesboro last season, Wayne threw his lot in with Pike this season chalking up 35 appearances to date. Possesses one of the best deliveries from dead ball situations.

Pat Mullins
A superb defender both in the air on the on the ground. Missed the first half of the season through injury and another knocked picked up in the semi final v St Peters has Pike anxiously awaiting news of his fitness for the final.

Shane Walsh
Shane has been a revelation this season. Like the O’Donovan brothers, Shane is a grandson of the Eddie O’Donovan Snr, and possesses many of the attributes that made his Grandfather a household name in the 60’s and 70’s.

Sean O’Callaghan
First year with the Hoops, Sean has been Mr Consistent with his no nonsense approach. Also offers a goal threat from corners. Played 34 of Pike's 36 games to date.

Eddie O’Donovan
Younger brother of Wayne, Eddie was also a part of the winning Pike FAI team in 2011 and has been a regular ever since. His pace is a huge asset to the Pike rearguard. Missed just two of Pike's games this season.

John Connery
A league winner with Carew Park, John has settled in to the Pike setup where he has been converted to a wide man. On his day he can be scintillating and has notched 23 goals to date.

Wayne Colbert
His return from injury has given the Hoops a huge boost. Even in his schoolboy days with Hyde Rangers demanded more of his team. His tenacity and will to win gives any side he plays with an advantage.

Jason Mullins
Younger brother of Pat, Jason stepped into the fray with a big performance in the semi-final, showing he can be relied upon on the big occasion.

Paddy O’Malley
Son of John O’Malley an FAI finalist with Balla in the 80s, Paddy has settled into the Pike set up with ease since his arrival at the start of this season from Avenue United in Clare.

Steve McGann
Another player to make the move from Avenue, Steve has been one of the players of the season, with his all action displays causing havoc. Scored the crucial opener in the semi final.

Colin Daly
Former Limerick FC player, Colin is a player who can spot the killer pass when no one else sees it. Can play in a number of position but behind the front man seems to suit best. He has 17 goals to his credit this season.

Cian Collins
Always a bright spark, Cian grew in confidence over the season and is now the Hoops established striker. Can turn a defender like no other striker. Nineteen goals to date with more to come no doubt.

Dave Ryan
Another of the winning side of 2011, Dave has taken on the role of player and assistant Manager. Used more from the bench this season but still capable of swinging a game on his introduction.