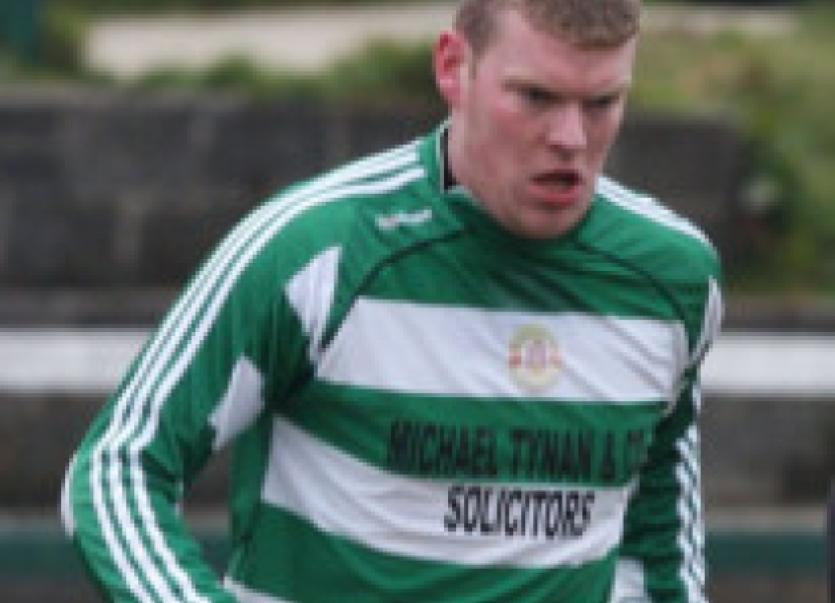 PIKE Rovers keeper Gary Neville guided his side to the final of the Munster Junior Cup on Friday evening at Jackman Park when they beat fellow Limerick side Ballynanty Rvs in the second semi final.

PIKE Rovers keeper Gary Neville guided his side to the final of the Munster Junior Cup on Friday evening at Jackman Park when they beat fellow Limerick side Ballynanty Rvs in the second semi final.

It was a strange game with Balla’s goal after 30 seconds sucking some of the anticipation from proceedings.

Balla were very good in that opening half with Jason Hughes and Dermot Fitzgerald in particular getting the better of the midfield battle.

Starting without John Tierney, Pike lacked the usual flair they show in the middle of the park and struggled to put a few passes together. However after the break Pike introduced John Okoro and reverted to a long ball game. It proved successful as it pinned Balla back allowing Wayne Colbert and Keith Harnett to get the upper hand in that crucial midfield sector.

Balla held out valiantly but with five minutes remaining were undone when Keith Harnett, as he does, popped up with the crucial strike to send the game to extra time.

Balla went into the tie as underdogs and were prepared for the fight but even they could not have dreamed of such a dream start. With the crowds still piling in, Frank Lee collected on the left 25 yards from goal and tried his luck with a harmless looking effort.

Pike keeper Neville seemed to be momentarily blinded by the sun as the ball bounced over the keeper into the net for the perfect start.

Pike’s first response five minutes later was a shot by Pat Moloney, after good work from Harnett, that flew inches wide of goal.

At the other end a Dermot Fitzgerald throw-in was flick on by Frank Lee across the face of goal with the support arriving too late to put the finishing touch.

After eight minutes a rasping shot from Wayne Colbert produced a superb save by Balla’s Stephen McNamara and the keeper recovered to save a second attempt by Harnett from the rebound.

Shorty after Eoin Hanrahan’s accurate delivery to the back post saw Colm Enright, with a diving header, just miss the target.

On 30 minutes a bout of football ping pong in the Pike penalty area ended with a Tony Fahy shot that was blocked by an alert Wayne Colbert.

The pace of Fitzgerald set him clear of Pike’s last two defenders but Neville emerged to narrow the angle and was able to get a block on the shot.

With the first half coming to a close Harnett’s ball across goal presented Moloney with an opportunity at the back post but the Pike striker seemed to mishit and the chance was gone.

Balla went within a whisker of taking a two goal lead at the start of the second half. Another superb delivery from Fitzgerald on the right found it’s way across the Pike area to Shane Guerin just outside the box who sent a goal bound shot towards the top corner from 20 yards but a stunning full length save from Neville kept the gap at one.

Finding little joy trying to play through the Balla rearguard, Pike reverted to route one and it nearly produced an equaliser on the hour mark when Okoro headed just wide of goal.

A minute later Alan Barry’s flick on was being teed up for a finish by Harnett when Dara Hughes got a vital touch.

Balla were pinned back at this stage and Harnett sent another glancing header just past the target but from a quick breakaway Fitzgerald’s cross was heading to the unmarked Fahy when Pat Mullins stuck out a foot to save the day for Pike.

When it looked like Balla would hold out Pike struck with four minutes remaining. Jason Heffernan’s cross seemed to be covered by McNamara when Okoro’s challenge saw the ball break loose. Eoin Hanrahan had a shot blocked on the line by Dunphy but in the melee that followed Harnett blasted through a crowded goal line for the vital score.

In extra time Balla had the best chance to snatch it when Alex Purcell picked out the speedy Adam Frahill on the right and his well struck shot saw Neville get down low to save.

The penalties produced their own drama with the first four failing to find their target. After four it was 2-2 and when Neville saved Balla’s last he followed by firing home the decider to seal the issue.