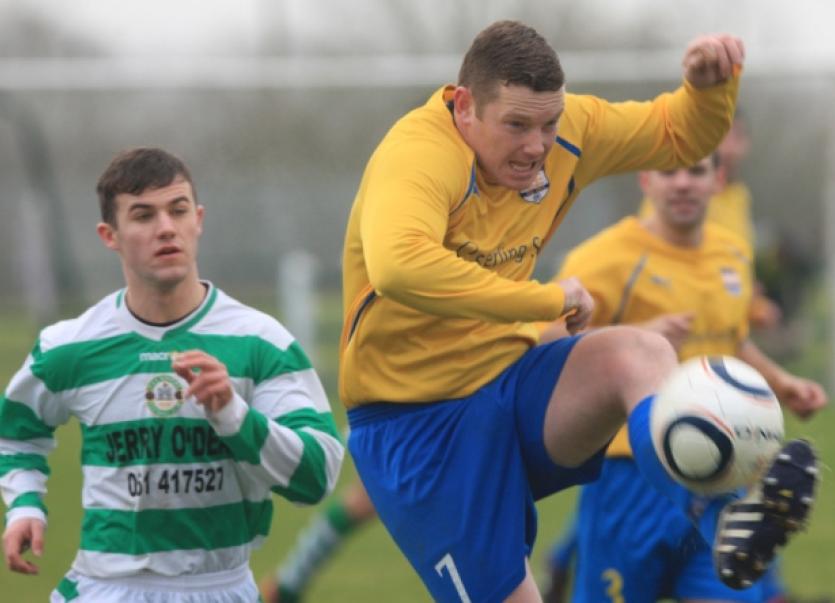 It was a good weekend for the Limerick sides in Munster Junior Cup action as a number of sides booked their place in the next round.

It was a good weekend for the Limerick sides in Munster Junior Cup action as a number of sides booked their place in the next round.

After a disappointing Saturday in which Corbally and Charleville exited the MFA Cup, Sunday brought better cheer for Limerick sides as all five made it through to the last 16 of the provincial tournament.

Ballynanty Rvs made it through with a hard earned but deserved win over a battling Nenagh Celtic side at the Fairgreen on Sunday afternoon.

Tony Fahy put the home side on their way when he arrived on cue to tap in from Dermot Fitzgerald’s cross.

Alex Purcell netted the crucial second goal when he challenged the Nenagh keeper in the air and when the ball fell loose the lively winger cheekily back heeled the ball to the net.

The visitors response was a shot from outside the box that took a deflection past McNamara in the Balla goal.

After the sides were rained out in the previous game, this replayed MFA tie saw Regional Utd advance to a last 16 clash with Kilmallock after defeating Ferrybank on penalties in a scoreless game.

In what turned out to be an open game Regional came closest to opening the score in the first half when Mike Behan hit the crossbar in the inrushing Ken Nealon failed with the rebound. Rob Shire in the Regional goal was called upon twice in the first half to prevent the hosts from going in front.

In the second half Behan and Nealon teamed up to give Shane Doherty a golden opportunity but his attempt failed to put the Limerick men in front.

Regional had Shire to thank again in the last minute when he pulled off a fantastic save to send the game into extra-time. Mark McManus had an acrobatic chance saved in extra-time and the game went to penalties.

Mike Aherne and Brian Aherne scored Regional’s first two penalties before Mike Reidy put them in front after Ferrybank missed their third. Shane O’Donoghue settled the contest when he scored the fourth penalty to send Regional through to the next round.

Janesboro were given an early scare in their contest with Killumney Utd when the visitors took the lead with just two minutes on the clock when Robert Walsh was taken down in the box and Alan Kearney put his team ahead from the spot.

However on the half hour mark Adrian Healy made a break down the right and put in a curling cross that Shane into the top corner to level scores.

On the hour mark Janesboro took the lead after Mike O’Gorman was taken down in the box and Clarke doubled his tally for the day.

Clarke turned provider for the third when he crossed into Mike O’Gorman whose volley gave the Killumney keeper no chance.

Brendan Hourigan put the icing on the cake with two minutes left when he went on a solo run beating the Killumney defence and slotted past the helpless keeper.

Geraldines “On Tour” continue to impress with another away victory on Sunday when they defeated Avondale Utd 5-0 in Cork to reach the last 16 of the provincial tournament.

Geraldines struggled initially to find their rhythm on the Avondale pitch but on 41 minutes they broke the deadlock when Colin beat two markers and fed the ball to Pa Maloney who managed to weave to the right and hit a powerful shot across goal to beat the Avondale keeper.

Just three minutes later the lead was doubled when an Avondale defender was judged to have handled the ball in the penalty area and Colin Scanlon scored from the spot.

Geraldines’ midfield started to boss the game in the second half and O’Neill and Daly were instrumental in the third goal when they exchanged passes before again finding Maloney whose shot across the face of goal was nudged in by Scanlon at the back post.

O’Neill was involved again for Geraldines fourth when he found space in the oppositions penalty area he cushioned the ball to Daly who, from an acute angle, made it 4-0.

The fifth and final goal came in the dying minutes when neat interplay between O’Neill, Jason Travis and Ian O’Donoghue provided Daly with a close range effort to make it 5-0.

Corbally were unfortunate to meet a bang in form St Michaels side on Saturday night as the Tipperary side ran in six goals without reply.

Pat Quinn and Russell Quirke scored a brace apiece side along with Paul Breen and David Slattery for Jason Purcell’s side who are the bookmakers favourites for the competition.

Kilmallock made it a day to remember for local sides when, despite being reduced to ten men after 30 minutes, recorded a superb 2-1 victory away to Cork side College Corinthians.

Jason Heffernan proved the man for the big occasion scoring both goals for the winners. Charleville’s game with Kilreen Celtic did not take place.