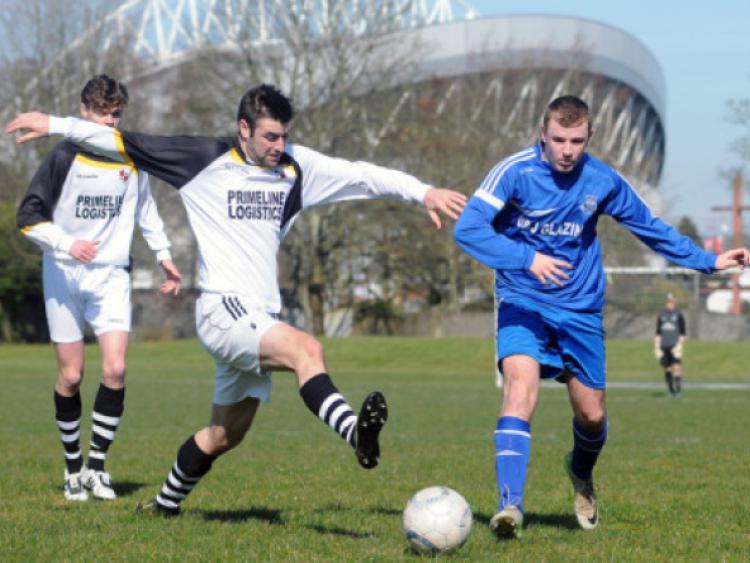 THERE were several crucial games in the Premier Division at the weekend with wins for Janesboro, Pike Rovers, Carew Park, Aisling Annacotty and Regional United.

THERE were several crucial games in the Premier Division at the weekend with wins for Janesboro, Pike Rovers, Carew Park, Aisling Annacotty and Regional United.

Janesboro passed a crucial test in their attempts of wrestling the Premier League from Pike Rovers when they beat fellow challengers Geraldines T Rathuard on Sunday morning.

Once again Conor Lynch was the ‘Boro hero scoring the only goal of the game with seven minutes on the clock.

Lynch, who was the top scorer in the Premier League 15 years ago, continues to show that once a top player has a knack of scoring it rarely leaves them. Other clubs could learn from Janesboro in keeping this rare breed of player wrapped in cotton wool to prolong their career as long as possible.

Geraldines battled gamely and looked like holding out for a point but with seven minutes remaining Shane Clarke and Paul Danagher clashed and the ball ran kindly for Lynch to run through to slot the ball home.

In reality the result means the title race is down to three sides but Geraldines and Ballynanty will play a huge part in the destination of the trophy.

Pike Rovers maintained their grip on top spot of the Premier League with a facile 6-1 win over Corbally United at the Pike Club.

Five goals to the good at the break courtesy of Eoin Hanrahan (2), Seamus O’Carroll, Ken Meehan and Colin Daly, Pike were in easy street for the second half.

To their credit Corbally showed more grit after the break with the second half finishing level.

Carew Park did what they had to do to keep pace with the leading pack with a 3-0 win over a struggling Knockainey.

First half goals from Alex Assouiss and Gary Griffin had the City boys well in control by the break.

Mark Slattery, with his first goal of the season, wrapped it up with the goal of the game, a stunning 35 yard free kick to the top corner.

Aisling Annacotty picked up three priceless points in their survival battle when they came out tops in their game at Ballynanty Rvs.

Jamie Daly gave Ballynanty Rvs the lead but Stephen Goggin had the sides level before the break.

Ballynanty had to play the second half with ten men and nearly did enough to gain a point.

However a superb winner by Brian Donovan after good work from Keegan Park sees Aisling move out of the bottom two and virtually kill off Balla’s outside hopes of the title.

With Moyross having one eye on next week’s FAI quarter final and Summerville Rovers fighting for their Premier survival it was no surprise that this one ended all square.

Rafa Klozyk restored the visitors advantage but Ger Cronin ensured a share of the spoils with his 13th goal of the season.

In a mid table affair Regional bounced back to beat Fairview by the odd goal in seven. Byron Fitzgerald and Andrew Cowpar had Regional two in front before Eddie Byrnes pulled one back.

Two quick fire goals after the break from Dylan Murphy and Dylan Frawley saw Fairview take the lead. Tom Frawley equalised and David Cowpar headed in the winner for the Dooradoyle club.