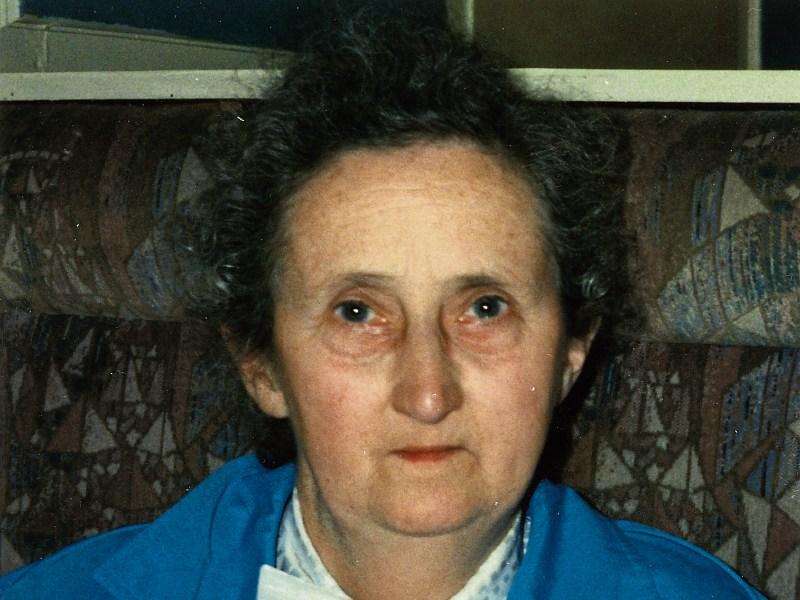 THE late, well known and very popular, Mona O'Brien was born at Bunavoi, Pallasgreen, on the feast of Our Lady of Lourdes February 13, 1933.

At the time of her death on November 29 she was predeceased by her parents Patrick O’ Brien and Bridget (née Buckley), and by her brother Patrick Joseph (Paddy Joe).

All who knew Mona recognised her Christian faith as the basis of her love for God, for other people, and for the natural world.

Mona was unfailingly observant in the practice of her faith. Prayer, especially the Mass, was central to her daily life. She was always willing to participate in the Liturgy, especially through singing and proclaiming God’s Word.

A yearly pilgrimage to Knock was an important expression for Mona of her love for the Mother of God.

Mona was an active member of the Legion of Mary for more than seventy years. For several of those years she organised the Junior Praesidia.

Her death coincided with the centenary year of the foundation of the Legion. She was also active over the years in the Pioneer Total Abstinence Association and in the St Joseph’s Young Priests’ Society. Her faithfulness to God and the Church was duly recognised some years ago by being awarded the Bene Merenti medal.

Mona loved and respected everybody. Children were especially dear to her, and her involvement with the Junior Praesidia was a source of great joy to her. She had a very deep fondness for all aspects of nature, especially plants and flowers, trees, and animals of every kind.

It gave her great pleasure to recite Joseph Mary Plunkett’s poem ‘I see his blood upon the rose’ to give poetic expression to her love of nature as a gift of God. Her love of words was often put to good effect through her compositions in verse marking special occasions over the years. She also deeply appreciated the Irish language.

Mona was a very sincere friend and faithful housekeeper to Canon Liam McNamara for some forty-one years. Countless visitors experienced her kindly welcome and generous hospitality.

Mona’s relatives, together with Canon McNamara, wish to express their deepest gratitude to the many people who showed great kindness to Mona throughout her life, and who gave such support and sympathy to them in their difficult loss.

Sincere thanks to Archbishop Kieran O’ Reilly SMA, Archbishop Emeritus Dermot Clifford, and the priests of the Archdiocese of Cashel and Emly. Thanks also to all who cared for Mona’s health and well being through the course of her life.

Most recently this was given at St Anthony’s Nursing Home, Pallasgreen, during Mona’s brief stay in the care of Sean, the nurses and ancillary staff. Thanks are due also to Dr Michael Sheahan, Dr John O’ Brien and Dr Con Cronin (Limerick), as well as to the many nurses who attended excellently to Mona’s needs over the years.

Mona’s funeral Mass was celebrated at the church of St John the Baptist, Nicker, on Friday December 2.

Thanks to Mona’s relatives for their participation in the Liturgy: Mary Teresa Buckley; John Harnett, Mary Jo Harnett; Anthony Buckley and Muriel Mulcahy. Mícheál Ó Riain, with members of his family, added solemnity and dignity with their excellent music and singing.

Similar gratitude is due to Mona’s great friend Eileen O’ Riordan for both singing and reading during the Mass. Thanks to the sacristans Brian and Nell O’ Neill, close friends to Mona throughout the years. We thank sincerely Ryan Undertakers, Pallasgreen, for their sensitivity and professionalism in carrying out their services.

A special word of gratitude to the Legionaries from Curia who organised a prayer service in Mona’s honour at the funeral home.

Finally, a word of deepest gratitude to the many people who attended the funeral, all who sent Mass cards and messages of sympathy.

In thanksgiving for the kindness shown by all, the Holy Sacrifice of the Mass has been offered for your intentions.