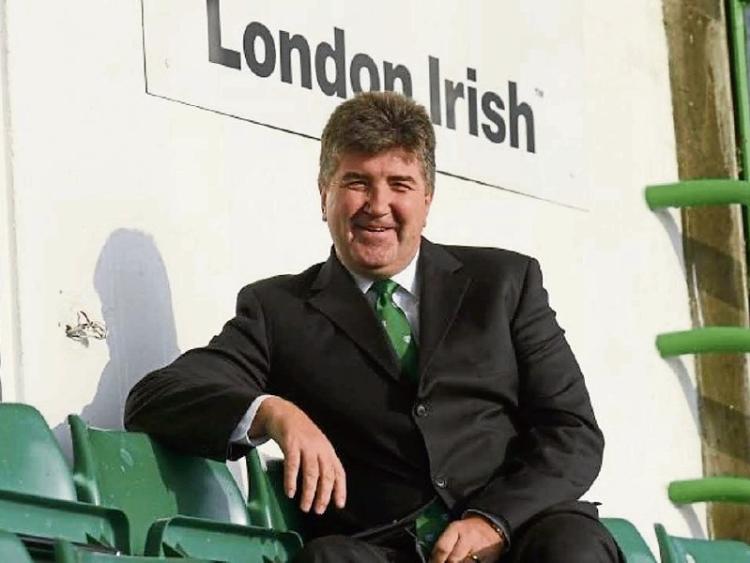 David Fitzgerald sitting in the stands at the London Irish grounds

David, who died on February 19 last year, is and always will be hugely missed.

David grew up on the Mill Road in Corbally. He went to school in Scoil Ide, Crescent primary and Crescent College Comprehensive where he captained the school in his final year.

He is best known in Limerick for his involvement in rugby – starting with Shannon RFC underage; schools with Crescent and Trinity College Dublin.

After graduating, David moved to London and joined London Irish RFC in 1986. He captained the club for two seasons 88/89 and 89/90.

When his playing career ended, David became involved in the administrative side of the club and served as chairman of London Irish Amateur from 2009-2015.

He played a leading role in the takeover of the professional club and served as Executive Chairman until 2015, then serving as Director despite his illness.

David’s love of Irish rugby never faltered and this included traveling to as many games as possible and particularly, Munster matches, though this probably had a lot to do with catching up with old friends for copious pints and chats!

As a businessman and natural leader, David was extremely successful working with Anderson Consulting, APAX Partners, the Carlisle Group and the Emirates Investment Authority.

Through all the professional and sporting accolades awarded to David and there were many, he remained the same.

A gentle giant, he loved and supported his family and was never shy about expressing his pride, wisdom and advice.

He enjoyed spending a week in Ballybunion each summer, playing golf and relaxing. He loved catching up with friends, either standing on sidelines or holed up in the bar sharing songs and stories.

He was a true friend and confidante to many and as the eldest in our family, he was looked up to and admired.

He is truly missed by his wife Sara, his children – Robert, Francesca and Thomas – and his siblings Fiona, Pam, Brian and Linda, stepmother Maureen, his extended family and his many friends.

David Fitzgerald’s anniversary on February 19 will be marked in St Paul's Church at 12.15pm Mass.