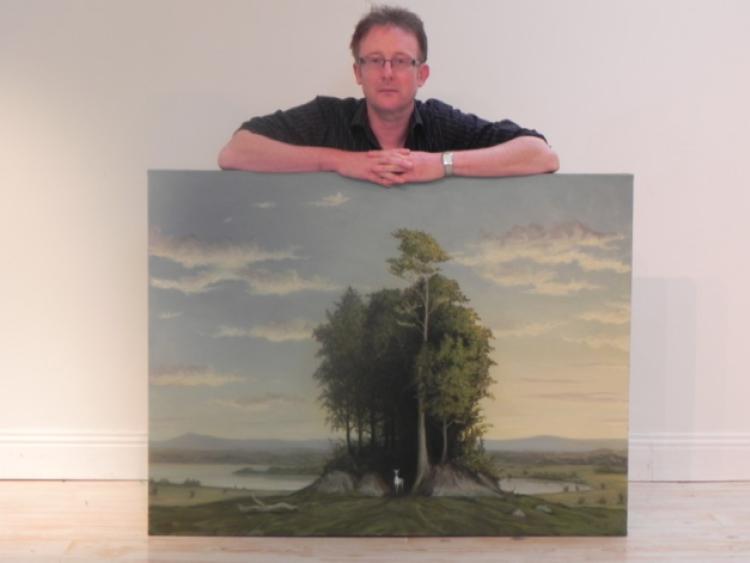 Born and raised in Lough Gur, it was my great grandfather who first bought Castle House and farm in 1891.

Born and raised in Lough Gur, it was my great grandfather who first bought Castle House and farm in 1891.

Together with my brother and my four sisters; we are the fourth generation of Ryans to have grown up there. I was educated, firstly, at Lough Gur National School and then the Presentation De La Salle Secondary School, in Hospital, Co. Limerick. Shortly, afterwards I entered Limerick School of Art and Design (LSAD), and soon realised that I was destined to pursue a career as a painter. I graduated in 1987 with a degree in painting and choose to practice abroad for a number of years living in Copenhagen and London before, finally, returning to settle in Ireland, in 1994.

It takes many years to develop your own personal style and vision as an artist.

In my twenties I only occasionally exhibited work, preferring to paint, draw and explore through a variety of mixed-media forms until I eventually found my own voice. My search for a personal vision involved borrowing certain traits from the great European Masters. However, the content and meaning was in a modern context. Today, I live and work out of what was the old Red Cellar Bar, in Lough Gur. It is now a renovated house and studio. There is an evocative haunting unique to the area that has influenced my work. Many people have artistic ability but it takes much more to become an artist. A person must be driven from inside to create, yet be tough enough to put up with disappointment. Artists see the world differently to everyone else. They are rare people, with an acute sensibility which must be nurtured.

Although, today, I paint landscapes, this is not to say that I am a ‘landscape painter’.

I paint animals that cannot be readily identified.

The landscapes are, likewise, strange, yet oddly familiar. I try and create universal otherworldly places executed in a classical manner. My images are heavily infused by romanticism and allegory. I have no interest in description or narrative. The infinity of space and time, the wonderment, fragility and cyclical nature of life are what my paintings are about. ‘Big Themes’ are hosted and delivered by a little creature that cannot be identified but, ultimately, this little creature celebrates the commonality between ourselves and all other creatures.

In the past, I have travelled extensively around the world and, as a result, have developed a deep-seated interest in natural history.

I suppose, growing-up on a farm surrounded by animals tends to shape your creativity. Although, I never paint or draw from life I have always kept a sketchbook where I record ideas and create compositions for future paintings. I usually come-up with the title of a new painting first (which is usually the reverse of how most artists work). I then develop a composition made-up of tiny drawings before eventually attempting the life-sized image on canvas. At this point I have resolved the image and rarely run into problems completing the final painting.

I have been very fortunate to feature regularly in prestigious exhibitions such as those organised by the Royal Hibernian Academy and the Royal Ulster  Academy.

However, there is always something special about exhibiting in my home town. I have had four solo exhibitions in Limerick alone. These took place at The Belltable (2000), The Moulin Gallery (2004), The Hunt Museum (2006) and Limerick Printmakers (2010). It amazes me that people still remember these events. Not only do they remember the paintings and their titles but, also, incredibly, where they were actually hung in the gallery.

Two years ago, the Naughton Gallery, at Queen’s University, Belfast, contacted me out of the blue and suggested a solo exhibition.

I accepted, but postponed the show by a year, as I already had another show booked for the Peppercanister Gallery, in Dublin. I always title my exhibitions and the Belfast show was suitably called The Last Of A Species.

The theme behind the exhibition was to pay homage to all species that have become extinct over a huge expanse of time and, also, those who will reach extinction in our life time and far into the future. At this point of extinction there will, very briefly, be just one last soul in existence, thence, my title, The Last Of A Species. To some this may seem dark and melancholic, to others a reflective celebration of life. All existence exists for a time, passes away and ends. This is the real nature of  existence.

My exhibition opened in Belfast last June and ran for two months. It was very well received by the public and got some fantastic reviews (see art critic John Higgins at www.cultuernothernireland.org /reviews/article search/ Last of a species). Cherrylane Fine Arts Gallery, in Delgany, Co .Wicklow, then, invited me to host the show this month.

During the Celtic Tiger years my entire output of work sold and it had started to appreciate in value.

One painting, auctioned in London, for example, sold for five times its initial price. However, those days are long over and it is increasingly hard to sell anything, today. Many art galleries have closed, and others are struggling to stay open, so, exhibitions are more important than ever.

However, there is still an appreciative audience out there and the market will eventually improve. With a little patience we will all see better days once again!

Robert Ryan’s current exhibition, entitled The Last Of A Species, can be viewed at www.cherrylanefinearts.com. More of the artist’s work can be seen at: www.robertryanireland.com. The exhibition at Cherrylane Fine Arts Gallery, in Co. Wicklow, will run until October 25th.