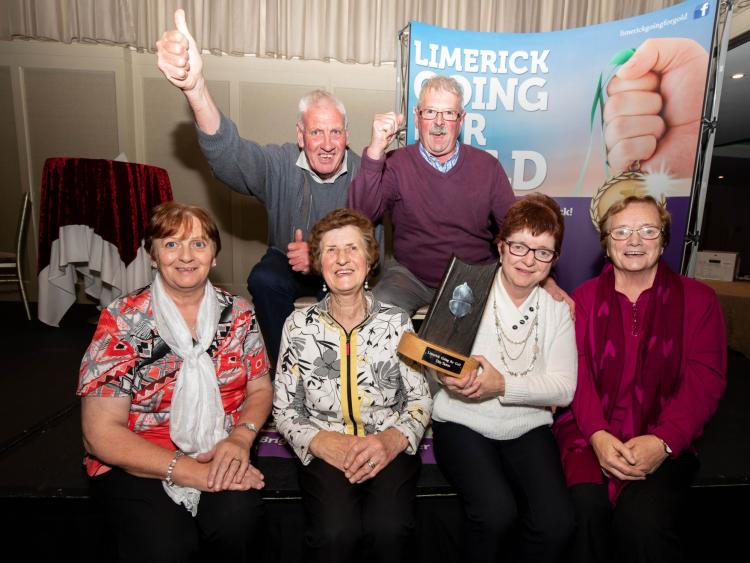 Fresh from their Bronze Medal in the National Tidy Towns last week, the party continued as judges awarded Ardpatrick with the top prize in the Going For Gold competition.

Limerick Going For Gold is a community-based competition aimed at making Limerick a cleaner, brighter place to work, live and visit.

The competition is sponsored by the JP McManus Charitable Foundation and has a total prize pool of €70,000. It is organised by Limerick City and County Council and supported by Live 95, The Limerick Leader and The Limerick Post, Parkway Shopping Centre, I Love Limerick and Southern Marketing Media & Design.

A total of 11 communities made the final of the Limerick Going for Gold Tidy Towns Category, before the winners were announced at the grand finale, attended by hundreds of people from communities across Limerick city and county in the Limerick Strand Hotel.

Five of the finalists in the Tidy Towns Category were selected by popular vote on the Limerick Today show on Live95 with the remaining areas chosen by the judges, Richard Barry (Tidy Towns Chair Tallanstown, Co Louth) and Michael Griffin (retired, Limerick City and County Council).

Prizes were also awarded in seven other Going for Gold categories.

Mayor of the City and County of Limerick Cllr Michael Sheahan congratulated the participating communities for helping to ensure that Limerick Going for Gold 2019 continued to be a tremendous success.

Speaking to the hundreds of attendees Mayor Sheahan said: “I want to congratulate all the entries in this year’s Going for Gold competition and of course the overall winners Ardpatrick. It is a credit it to you all how communities can come together and transform their areas. Everyone working together, sharing a common purpose.”

“As a public representative, I am privileged to meet with voluntary groups on a daily basis and I understand and appreciate the hard work you are doing to enhance your areas. Nurturing community spirit and fostering civic pride are the raison d’être of Limerick Going for Gold.”

Gerry Boland from the JP McManus Charitable Foundation said: “I would like to congratulate everyone involved in the whole campaign again this year. The JP McManus Charitable Foundation is committed to continuing to assist Limerick communities to reduce the impact of litter across Limerick city and county. I would to thank you all again for your continuing participation in the Limerick Going For Gold Campaign and for the enormous contributions which you make to the well-being of the communities in which we all live.”

The judges spent days travelling the length and breadth of Limerick to visit every community involved in Limerick Going For Gold.

Richard Barry said: “Limerick Going For Gold has a really broad appeal, it pitches the level at everyone from the Tidy Towns category to Limerick Bee Friendly in Bloom and the Best Front Garden. It gives everyone a chance to participate. Limerick Going For Gold gives areas a chance of winning that they may not necessarily be able to compete in the National Tidy Towns.”

“Limerick Going For Gold is a brilliant example of partnership between the local authority and communities right across Limerick, which is now ongoing for nine years.”

Dance for our Oceans - Cert