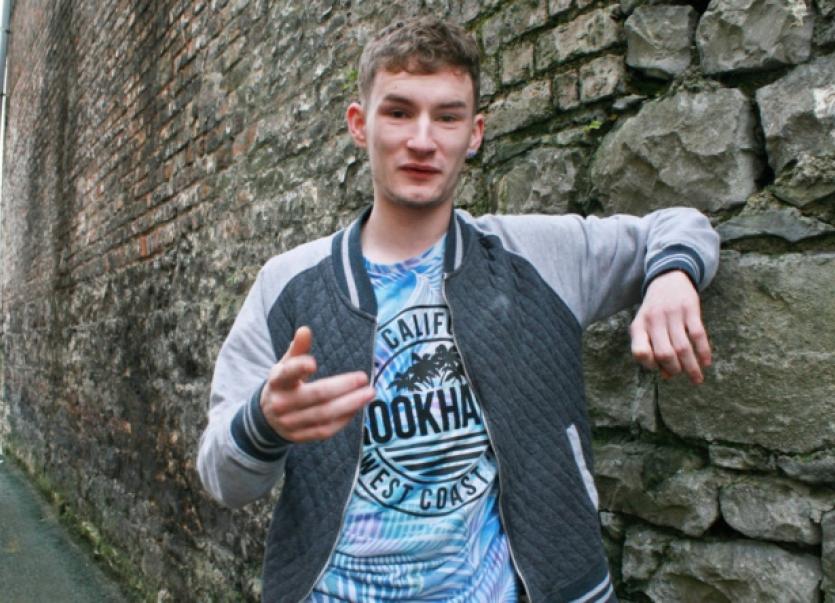 FROM recording with a mic and stand in his bedroom, to the famous Temple Lane Studios in Dublin, young Jack ‘Lynchy’ Lynch is on the trail to being Limerick’s next pop music sensation.

FROM recording with a mic and stand in his bedroom, to the famous Temple Lane Studios in Dublin, young Jack ‘Lynchy’ Lynch is on the trail to being Limerick’s next pop music sensation.

Thanks to two years of social media and word of mouth driven success and strong live performances, the 19-year-old Ballyneety native has seen his career rise to the point of releasing his debut single Spotlight with Universal Music last Friday, with the hope of increasing his ever growing rap reputation.

His story began when he performed a freestyle rap at a bus stop on O’Connell Avenue after school two years ago and has grown to him greeting thousands of a fans at a gig in the UK and now the single success.

While still a student at St Clement’s College he recorded the improvisational rap and it subsequently went viral online. That is when, he said, he decided to set up the MC Lynchy Facebook page with his friend and manager Johnny ‘Jono’ Carey.

After securing a deal with a booking manager, Lynchy then began his touring career. His first stop was an underage disco in Newcastle West. Not long after that, he was crossing the border to Northern Ireland and subsequently busting rhymes in the Netherlands.

Though he has a strong fanbase in Limerick, his international supporters “go nuts” when they see him, he told the Limerick Leader.

“Me and Jono came out of a gig one time, and they actually stopped traffic on the street. It was mad. Over in England, I get a pretty good reaction, too,” he said.

Lynchy added that even when he arrived in the airport, ahead of his first overseas performance in Breda, Netherlands, his fans were “ready to greet” him.

Only a few months ago, Jack received the all important phone call — being told that he would be signing to one of the biggest record companies in the world.

“I laughed. Jono passed the information onto me, and I just started laughing. I was like: ‘You have to be joking.’ And he said: ‘No, no, Universal want you.’ I was in serious disbelief for about a half hour. And then there was a group chat on Facebook, and Neill [booking manager] was telling me that things were looking good with Universal,” he explained

Lynchy wasn’t nervous, he said, when he first stepped into the studio to perform some of his rhymes in front of the producers.

However, he admitted, that when they put two to three cameras and lights in front of him, in order to shoot a promo video, that is when “things were getting serious”.

Jack said that he was always practising his rapping, ever since he was in 4th or 5th class in primary school, frequently recording himself on his first mobile phone.

“What got me into the MCing is the style and pace of the songs, how they could rap and rhyme so fast. Rap is originated from the heart, and I like to include what I see everyday,” he added.

And even though the single is only just out, Jack is already thinking about where he wants to be next year.

“I would like to see myself established in music, not necessarily be huge like Eminem. I would like myself to be known with a good bit of work done. I want to have a lot of work done this time next year, and I want to show people what I am made of.”