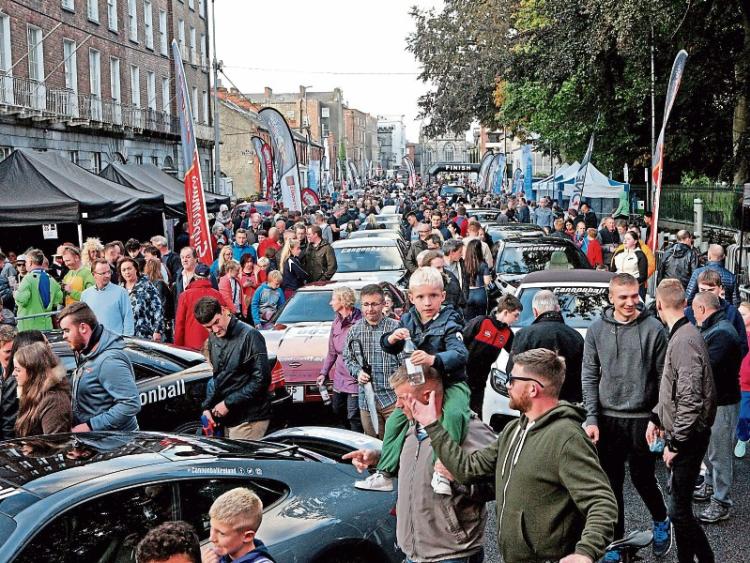 AN INTERMITTENT spray of rainfall didn’t deter a sea of people from Limerick and across the Mid-West from witnessing the spectacular Cannonball supercar showcase, on Friday evening.

One by one,  the variegated motorcade smoothly motioned past an energetic crowd that lined the entirety of Pery Square.

And warming up the show, at around 6pm, were familiar faces to the hundreds of eager children — Transformers’ Bumblebee and Ironman — robot-dancing to the booming rave music on the street.

Then, in a flurry, came the arousing roar of the cavalcade. The supercar stamina in the fleet could be heard from their explosive engines, prompting nods of approval by the masses.

Resplendent McLarens, debonair Mustangs, sauve Lamborghinis, fierce Ferraris, and powerful Audis, the showcase was an exposé of more than 100 of the industry’s top supercars, most of which averaging at a minimum cost of €200,000.

This rose Lamborghini is a star attraction here in Limerick at @cannonballire! pic.twitter.com/spnqz9JarF

This was all part of an 1,000km All-Ireland charity tour, in aid of Make A Wish Ireland, and Cannonball Ireland has raised, in its nine years, has raised more than €900,000 for various charities.  And according to founder Alan Bannon, the showcase benefits the Irish economy in the region of €2.57m.

As soon the autocade filled Barringtons Street and Pery Square at around 6.45pm, the barriers broke and the impressed crowd took the opportunity to meticulously inspect the vehicles.

“Mom!” shouts young Ashling Hackett to her mum Karen while admiring a lime-green McLaren 650s, “I’m going to have one of those when I am 18!”

This was the general, aspiring attitude of most of the car-loving youngsters at the show.

Some nods of approval to those roaring supercars! pic.twitter.com/VN0dmh5tcq

“This is all very impressive,” Dooradoyle mum Karen tells the Leader, “It is nice to bring the kids to this, and she has a particular interest in this.”

“I like the Lamborghini with the butterfly doors,” Ashling’s brother David says emphatically.

Greg Doran, from Limerick city, brought his excited daughter Kate, 9, to the show to “show support for something very positive happening in the community.

“And it’s absolutely unbelievable to see these cars that we would see on TV, so it’s nice to get up close. And Kate is absolutely fascinated by the cars. She has never seen anything like this before.”

“Would you like one of these cars someday?” I ask Kate.

“Em,” she ponders for a few seconds and looks to her father for approval, “A Ferrari?” She adds that she is already saving with her Communion money.

Tracy Moroney, a native of Dooradoyle, was with her partner Donn, showing off their sturdy Audi S8.

“My partner Donn was the main sponsor for four years, so he has done eight to nine years and this is my fourth year. And that’s how we got into it originally, and it’s addictive. Once you do it once, you want to do it again and again."

She opines that cars are not a niche form of entertainment; it is for everyone.

“As you can see here, it is family entertainment, and it’s for everybody. Obviously the cars are a great attraction. There is a lot of entertainment here and, as well, it is for a great cause.”

We love Limerick! WHAT a crowd ❤

You don’t have to be an expert to appreciate the cars, she adds.

“I am no expert — but Lamborghinis, Ferraris, they are always going to be the top of the list for, probably, mainly for young people. It is the colours, the excitement, it’s the noise. When you hear that ‘vroom vroom’ coming in, that is what attracts people," she enthuses.

The atmosphere surrounding the supercars was synonymous with a Cirque Du Soleil spectacle with a large number of drivers, festival crew and members of the public dressed in flamboyant attire.

It also proved to be an opportunity for people show off their cute puppers, with many spectators distracted by gorgeous dog breeds strutting next to the cars.

Friday evening marked day one of the three-day spectacle, and will conclude at the finish line in Kilkenny on Sunday afternoon.