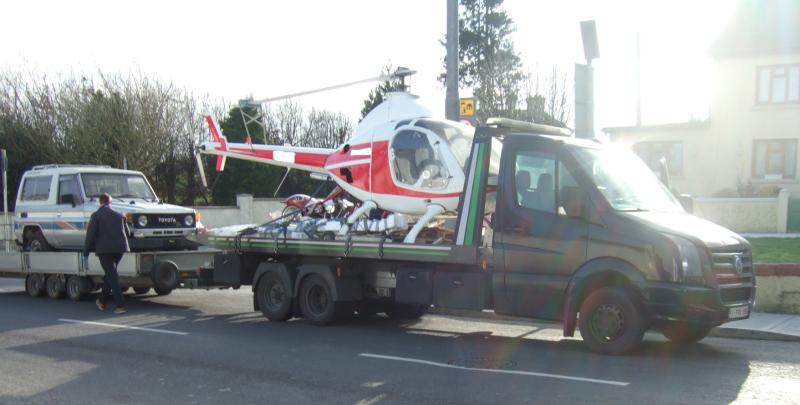 Gardai encountered the helicopter in Caherconlish

A MOTORIST transporting a helicopter on a trailer was stopped by gardai while travelling through County Limerick earlier this week.

Gardai have confirmed they stopped a vehicle on High Street, Caherconlish on Tuesday morning. Coincidentally, it is the same street where 24-hours earlier, telephone poles were snapped after a truck hit overhead wires.

The red and white helicopter - a Rotorway Exec 162F - is understood to be registered in Portugal. A recovery vehicle was called by gardai and a jeep, helicopter and motorbike were subsequently taken away.

The Limerick Leader contacted gardai after photographs of the helicopter outside Henry Street garda station were widely shared on social media and WhatsApp.

In response to the query, a garda spokesperson said a male, aged in his 40s, was brought to Mayorstone garda station following the unusual detection.

They added that the man and the vehicles were later released.

The owner of the helicopter has since contacted the Limerick Leader to state the reason for the vehicle being stopped related to insurance.

"It was regarding insurance documentation on the Belgium-registered transport truck. I produced this documentation to gardai and the vehicles and helicopter were immediately released," he said.