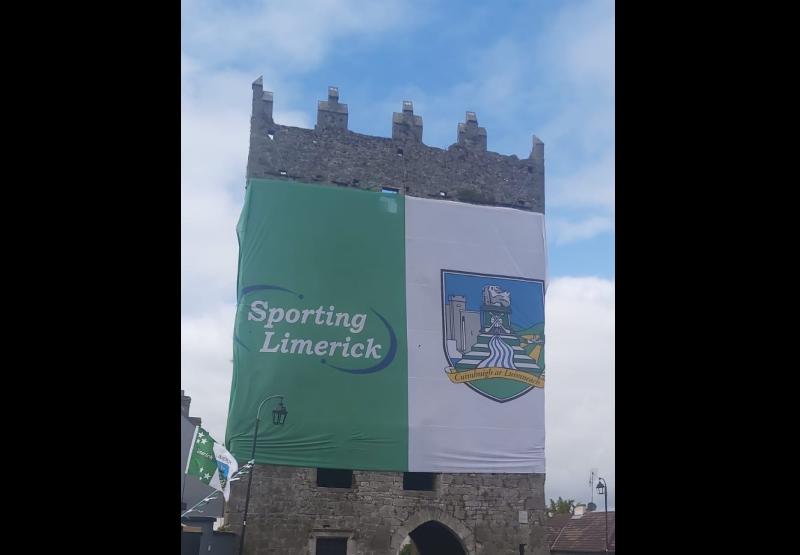 THE PEOPLE of Kilmallock are asking why there is no giant flag in support of the Limerick hurlers on the town’s King’s Castle.

The massive showcase of pride in the county’s hurlers had gone down a storm in recent years when erected on the castle by members of Kilmallock Tourism Development CE Scheme.

The 40 foot by 30 foot flag even garnered local and national media attention ahead of last year’s All-Ireland final.

However, earlier this week, a message was posted on the Kilmallock Tourism Development Facebook page. It reads: "They stopped us putting up the big flag. But they won't stop us from putting up our colours. C'mon now Kilmallock show your support for our lads - get your green and white out. H’on Limerick."

Locals have been left scratching their heads as to why the flag hasn't been erected this year.

"No one owns that castle, it belongs to the town. We should start a campaign to bring back the flag," one local posted on Facebook.

"It was up for a couple of days, the castle has stood," posted another in reference to previous years. "It was beautiful up there," they added.

When Limerick Live contacted local councillor Mike Donegan - who is also chair of Kilmallock Tourism Development - he explained that on Monday, July 4 - the day after Limerick beat Galway in the All-Ireland semi-final - he received communication from The Office of Public Works (OPW) via a senior officer at Limerick City and County Council.

"They advised us, as a community, not to put the flag up due to the condition of King's Castle. They said it was for health and safety reasons and for fear of causing any damage to the structure," said Cllr Donegan.

Cllr Donegan said the OPW - who manage King’s Castle - advised them to take the flag down last year.

Consequently, if there was an insurance claim, Kilmallock Tourism Development wouldn’t be covered, he said.

Executive Archaeologist at Limerick City and County Council, Sarah McCutcheon, made contact with Cllr Donegan on behalf of the OPW.

"They (OPW) came to me informally because they were worried about the effect of the banner on the structure. I asked around and I contacted people I thought might have knowledge of where it came from and how it got it up there," said Ms McCutcheon.

She stressed that the "OPW have been nothing but co-operative".

"Anytime we have asked to use King's Castle in the past, not only have they allowed us to do it but they have gone in and been rigorous in making sure it was clean, tidy, and beautifully presented and any of of the other buildings as well. They have been nothing but co-operative.

"When I have been helping communities organise events in Askeaton or anywhere where there are national monuments owned by the State and maintained by the OPW they have bent over backwards to assist and open and beautifully present the structures," said Ms McCutcheon.

Cllr Donegan said there is a lot of disappointment that there is no giant flag on King's Castle this year.

"A lot of people have contacted me about it. Some have made the argument that there are giant flags on King John’s Castle in the city and the Fuller’s Folly building in Newcastle West but they are owned by the council. King’s Castle in Kilmallock is under the jurisdiction of the OPW," said Cllr Donegan.

He hopes that an alternative site may be found for the flag in the town. Cllr Donegan said he will also be asking the OPW to carry out a survey of King’s Castle.

"As a councillor I want to make sure it is safe for people to be walking under it," said Cllr Donegan.

in a statement issued on Thursday, a spokesperson for the OPW stated: "The Office of Public Works has no record of receiving a request for permission to fly a flag on the structure in Kilmallock.  Therefore, OPW never refused or advised them not to do so."

In a follow-up query from Limerick Live on Thursday, the OPW were asked what their decision would be if a request for permission was issued to them.

In reply, a spokesperson said: "A very large banner was erected on King’s Castle in 2021, the fixing of which endangered vulnerable masonry.  Fixing a banner to a monument is in breach of National Monuments legislation and is illegal.  There are procedures in place within the OPW for the community to use the Castle to support Limerick.  All such requests must initially be directed through the OPW Press Office. Given the lateness of the request, it is not possible to facilitate any request of this nature this year, but the advice is to engage with us as soon as possible if the community wish to support their team next year."