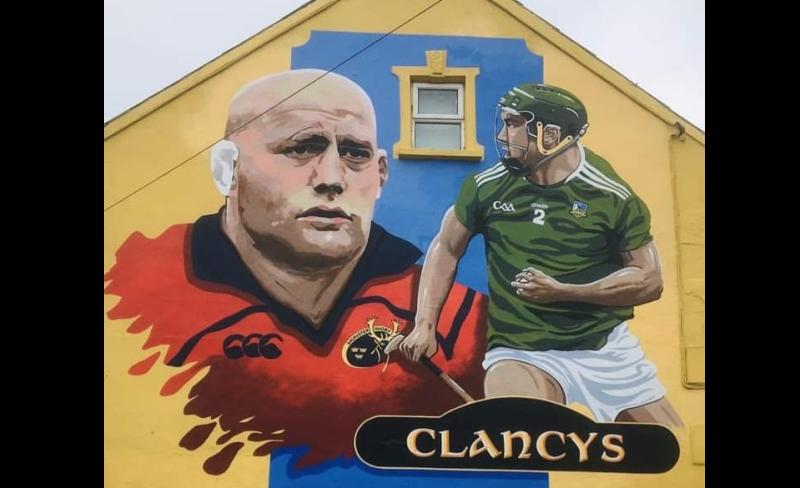 Side by side on Clancy's Bar in Bruff: John Hayes and Sean Finn

WHEN you are painted on the side of Clancy’s Bar in Bruff you have reached the top of your respective sport.

Istabraq, Keith Wood, John Hayes, George Clancy and now Sean Finn have been immortalised in mural form. But while the Limerick corner back has only appeared in recent weeks the planning goes back to last year.

"When Sean got his fourth All Star we thought he should be honoured. The only way we have of honouring him is to put him up with other Bruff greats who have helped put the town on the map,” said Jack, of Clancy's Bar.

The big sports fan contacted Irish artist Niall O’Dwyer, who does all the murals on Clancy’s Bar since Jack started doing them 22 years ago. Inside the pub, there are paintings of Dolores O’Riordan, Rachael Blackmore, the Munster and New Zealand 1978 teams, Rory McIlroy, Sean Finn, Shane Lowry and the Ryder Cup trio of Padraig Harrington, Paul McGinley, Darren Clarke. They were all painted by Niall.

The artist can only do murals in the summer time due to the vagaries of the Irish weather so he completed the Sean Finn commission from last year about a month ago.

The old mural of John Hayes also got "touched up". He was previously wearing an Irish jersey. As the green of Limerick and Ireland clashed, Niall put John back into a Munster jersey and added Sean in his Limerick jersey.

John told LimerickLive the mural of himself and Sean is "class". Although the always modest Lions, Ireland, Munster and Bruff great says he is surprised he hasn’t been painted over at this stage!

"I think Keith Wood was on it for a time. It was no harm to get rid of him," joked John.

"When we passed through Bruff the children used always look up and comment when they saw me up on the side of it. I would have said with the success that Limerick have had over the last few years, and definitely the way Sean is playing I said Sean Finn should be up on the wall," continued the Cappamore man.

And now they are up there beside each other. But would John win in a shouldering contest on a hurling field?

"I don’t think so somehow! I’ve got too auld for that. If I could convince him to go playing for Bruff RFC that would be better than me trying to hurl against him. You could throw him out in a rugby field and he wouldn’t be out of a place,” smiled John.

Retired international rugby referee George Clancy had to be repositioned in the mural. Niall will be restoring the Bruff native in the coming days. So George will be keeping a close eye on John Hayes and Sean Finn and will flash yellow cards if needs be!