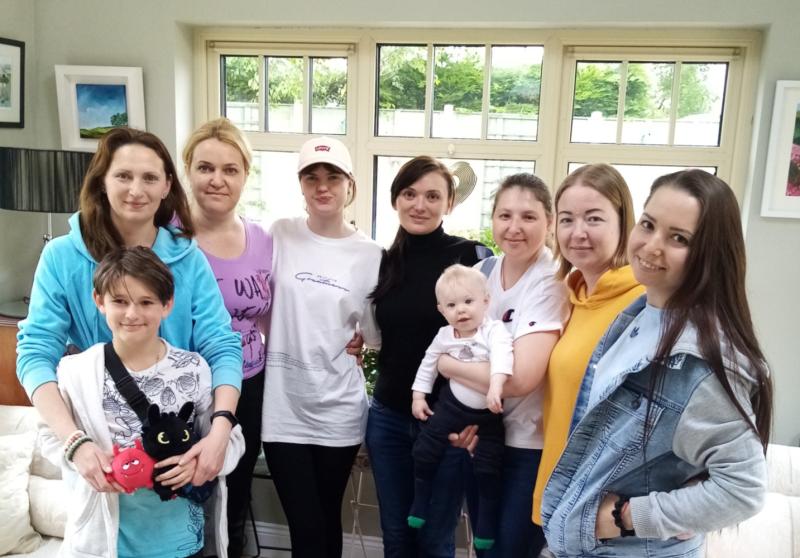 A photo of the Ukrainians pictured after returning to Castleconnell from Dublin to collect their social welfare payments / PICTURES: Emer O' Donnell

FIFTEEN Ukrainians who were moved with one day’s warning from a Limerick hotel have described their horror at being ripped from the community where they were forging a new life.

The group were informed on Friday, May 14 and subsequently moved the next day to four tiny apartments in Temple Bar, Dublin.

The Ukrainian refugees have been staying at the Castle Oaks House Hotel in Castleconnell since March. Limerick Live understands that the Castle Oaks was happy for the Ukrainians to stay as long as required. Four were working locally, two had jobs pending and several of their children were enrolled in local schools.

The Ukrainians who have fled their war-torn country issued a collective statement to Limerick Live. They emphasised how thankful they are for all that has been done for them.

"We do not feel safe (in Temple Bar). No one can sleep with singing, shouting, breaking glass, and noise late at night," they said.

They described being "crammed in" at their new emergency accommodation, which they said, has no kitchen facilities.

"Where we stay is very small. Mom and baby have been asked to sleep on sofa in the kitchen by the manager," they said.

One woman, Iryna, had her bag stolen on her first day food shopping in Dublin. She found it lying outside the shop, with its contents strewn across the road, only her Ukrainian bank cards remaining.

She, along with her 12-year-old daughter Sofia, want to return to Castleconnell. The four children staying in the capital are 16, 12 and 10-years-old, while the youngest is just ten months of age.

One boy Nikita, and his mom Tatiana have been successful in retuning home to Castleconnell, where they will be staying with a local.

Emer O’ Donnell, a resident of Castleconnell, had been allowing Ukrainians at the Castle Oaks Hotel to avail of her laundrette, and has built up strong relationships with the group.

She explained that despite being moved to Dublin, they must continue to travel down to Castleconnell village, to collect their social welfare payments from the local post office.

Emer stressed that it takes two or three weeks to change the pickup location of the welfare payments and that the group have already been warned that they could be moved again to a new location.

"This shouldn’t have happened. The people of Castleconnell were never consulted. Many of us would have been willing to offer space in our homes," Emer said.

Among the group, pictured above at Emer’s house after travelling down on Wednesday to collect their payments, are two professors, a geologist, a software engineer, bookkeeper and a physics teacher.

Since the abrupt move to Dublin last weekend, two have given up and moved to the UK.

One young couple, Vlada and her boyfriend Dmitri, a software engineer who was about to gain skilled-employment in Castletroy before being whisked away, also want to return.

While concerned, they stressed that they want the mothers and their children within the group to be rehomed first.

"Please we want to come back to Castleconnell to our jobs and schools," the others pleaded, in their statement.

The Department of Children, Equality, Disability, Integration and Youth were contacted by the Limerick Live for comment.

A spokesperson said the Department does not comment on individual cases.

"The Department of Children, Equality, Disability, Integration and Youth is focused on providing immediate, temporary accommodation to people fleeing the conflict in Ukraine.

"The State is currently providing accommodation to over 21,501 people who have fled here from Ukraine in recent weeks. The accommodation provided to people fleeing the conflict in Ukraine by IPAS is temporary in its nature, and given the number of people that are being accommodated it is not possible to develop tailored solutions for individuals or families in this time of acute need.

They added: "The State is currently in an emergency response to the ongoing crisis and such moves are necessary to ensure that applicants for international protection and all those fleeing here from Ukraine can be accommodated. In seeking to address immediate accommodation needs, safety and security are the paramount considerations."