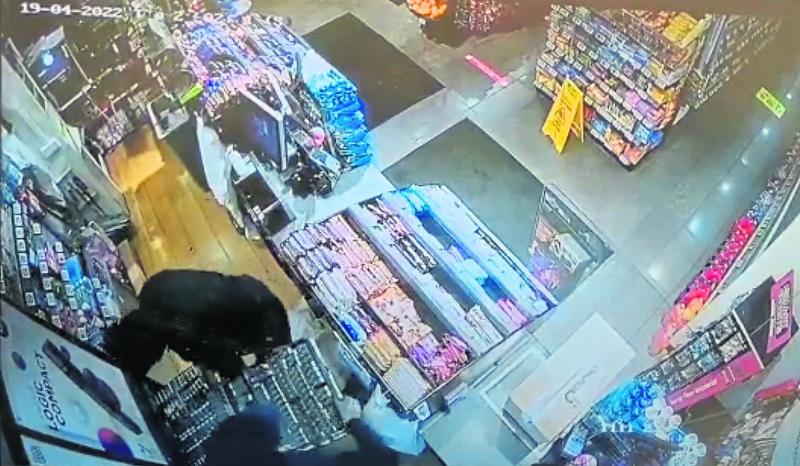 CCTV footage from one of the stores which was targeted

BRAZEN thieves have cashed in scratch cards they stole from a County Limerick store.

Last month, Limerick Live reported that gardai were on the hunt for a criminal gang who hit three stores in one night.

Officers confirmed they are investigating two burglaries that occurred at retail premises in Castletroy on Tuesday, April 19. The culprits then headed for the county and broke into a shop in Doon at 1am early that Wednesday morning.

Gardai have not revealed what was stolen but it is understood that cigarette machines in the premises were targeted. As well as thousands of euros worth of cigarattes being taken in total, a quantity of scratch cards was also stolen from the shop in Doon.

After the theft the perpetrators sat down to scratch the cards and see how much they “won”. Limerick Live has learned that the “winning” scratch cards were cashed in at a shop in Tipperary Town on Saturday, May 7.

The brazen move was confirmed by gardai. It is understood the criminals got friends or associates to enter the shop and collect their ill gotten gains. The sum they claimed is not known.

A garda spokesperson said: “The investigation is ongoing. We are following a number of leads.” It is a joint operation between Bruff gardai; the crime office in Henry Street and gardai in Tipperary.

One person with knowlege of what occurred said, “Talk about wanting to have your cake and eat it”.

“I don’t know if it was audacious or completely stupid as obviously who ever brought the scratch cards in to the shop to get the money was caught on CCTV,” they said.

Limerick Live understands the National Lottery is aware of this incident and are assisting gardai with their ongoing investigation.

CCTV has been provided to Limerick Live by one of the shop owners who didn’t wish to be identified.

Two perpetrators broke into the premises using a crowbar and immediately rushed to the cigarette machine where they made off with thousands of euros worth of tobacco.

They both wore all dark clothing with hoodies and Covid masks to cover their faces. It is not known if there was a third person in a waiting vehicle.

“In relation to the burglary in Doon there were good forensics gathered at the scene and there was a car located in the Garryowen area which was linked to two other burglaries in the Limerick city area and they are connected to our one out in Doon.

“So we are hoping that that will lead to a very positive result and we will get somebody for that,” said Insp Brennan.

Limerick Live understands enhanced security measures have been put in place in the stores which were targeted.